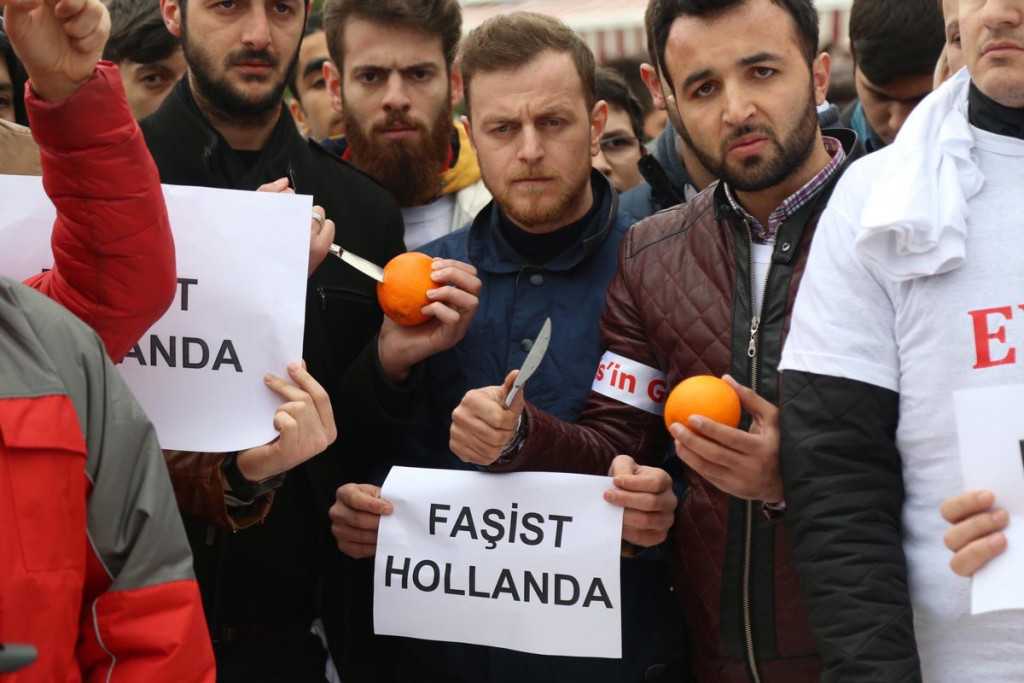 Erdogan supporters protest against the Netherlands, squeezing and drinking oranges

The bizarre diplomatic scandal that erupted over the weekend, after the Netherlands banned several prominent Turkish politicians from organizing and participating in pro-Erdogan rallies just days ahead of the Dutch general election where immigration will be perhaps the most important topic, and which prompted numerous accusations of “nazism” and “fascism” by Turkey’s president Erdogan, appeared set to escalate further on Monday when the Turkish cabinet is expected to consider imposing sanctions on the Netherlands in a deepening row with the country’s NATO ally. Cited by Reuters, one minister said punitive measures were likely.

A government source told Reuters that sanctions were expected to be discussed when the cabinet of ministers meets at 7 pm (1600 GMT). Ankara’s minister for EU Affairs, Omer Celik, said sanctions were likely. “We will surely have sanctions against the latest actions by the Netherlands. We will answer them with these,” Celik said.

In addition to economic measures, sanctions could affect cultural activities, and military and technological cooperation. “When the sanctions are imposed, what we need to be careful about is being realistic. We are not completely closing the windows,” the source said. “However, we want to show that what has been done to Turkey will have a response.” He said certain cultural activities may be cancelled and the re-evaluation of military and technological cooperation was also on the table.

Earlier, Turkey summoned the Dutch charge d’affaires on Monday to complain about the ban – imposed due to fears of unrest and distaste at what the Netherlands sees as an increasingly authoritarian tone from Erdogan – and the actions of Rotterdam police against Turkish protesters over the weekend, foreign ministry sources said. As we reported on Sunday Dutch police used dogs and water cannon to disperse hundreds of protesters waving Turkish flags outside the consulate in Rotterdam. Some protesters threw bottles and stones and several demonstrators were beaten by police with batons, a Reuters witness said. Mounted police officers charged the crowd.

“The Turkish community and our citizens were subject to bad treatment, with inhumane and humiliating methods used in disproportionate intervention against people exercising their right to peaceful assembly,” a statement attributed to ministry sources said.

As further reported over the weekend, President Erdogan, who is seeking support from Turks in a referendum on boosting his powers, accused the Dutch government of acting like “Nazi remnants” and said it should face sanctions for barring his ministers from addressing expatriate Turks to drum up votes. The row marks another low point in relations between Turkey and Europe, further dimming Ankara’s prospects of joining the bloc. It also comes as Turkey is caught up by security concerns over militant attacks and the war in neighboring Syria.

Some 400,000 Turkish citizens live in the Netherlands and an estimated 1.5 million Turks live in Germany.

Commenting on the Turkish official visits, the Dutch government said the visits were “undesirable” and it would not cooperate in their campaigning. According to polls, it is set to lose about half its seats in elections this week as the anti-Islam party of Geert Wilders makes strong gains. Monday was the third time the Dutch envoy had been called in since Saturday over the row. The Dutch ambassador is on leave and the Turkish foreign ministry says it does not want him back “for some time”.

For now, economists do not anticipate a major fallout from the diplomatic scandal. Ozgur Altug, chief economist at BGC Partners in Istanbul, said at this stage he did not foresee the row having serious short-term economic consequences. Still, with Dutch direct investment in Turkey amounting to $22 billion, making the Netherlands the biggest source of foreign investment with a share of 16%, there is a substantial risk of escalating retaliation which could impact the deteriorating Turkish economy which recently posted double digit inflation.

“If the tension escalates and if countries start imposing sanctions against each other, it might have serious implications for the Turkish economy,” Altug said.

Turkish exports to the Netherlands totalled $3.6 billion in 2016, making it the tenth largest market for Turkish goods, according to the Turkish Statistical Institute. Turkey imported $3 billion worth of Dutch goods in 2016.

Additionally, Reuters notes that Dutch visitors are important to Turkey’s tourism industry, which was hit hard in 2016 by security fears due to attacks by Islamic State and Kurdish militants. Some 900,000 Dutch people visited Turkey last year, down from 1.2 million a year earlier.

Ankara has given the paramaters it seeks to de-escalate: it is is seeking an official written apology for the treatment of its family minister and diplomats in Rotterdam, the Turkish foreign ministry sources also said. However, as noted on Sunday morning, Dutch Prime Minister Mark Rutte has said it is Erdogan who should apologize for comparing the Netherlands to fascists and Nazis, adding that Turkey was acting “in a totally unacceptable, irresponsible manner”. NATO Secretary-General Jens Stoltenberg called on Turkey and the Netherlands to defuse the row.

Meanwhile, assuring that the scandal is likely to get worse before it gets better, a front page headline in the pro-government Aksam newspaper place a photo of a police dog biting the thigh of a man during Saturday night’s protest in Rotterdam, above which it placed the headline “Nazi Dogs.” 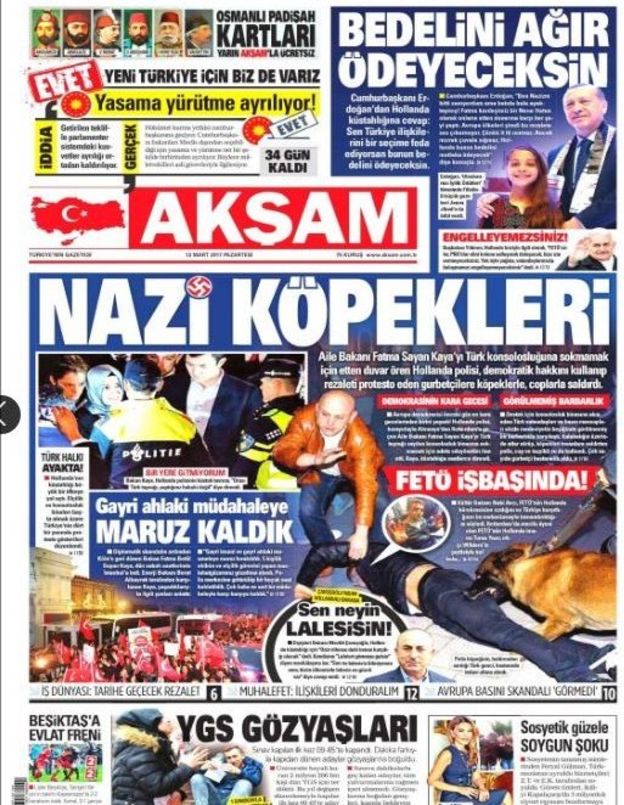 Maybe Erdogan is going to pull out from supporting terrorisms or chasing foreign troops out of Ircirlik airbase or insulting or accussing USA or stop sending his citizens to Europe under the pretex of refugees.This is poor decisions not sanction it wont have economic impact as European countries does not rely on arabs.

I agree with you mostly. but what do arabs have to do with this? Erdogan and the turkish are not arabs!

But erdogan most certainly supports the terrorism in syria. which is dangerous because it WILL spill into turkey. and as of the other day the turkish army attacked syrian border positions. i doubt erdogan will stop supporting terrorism, as he has an obvious agenda in regards to syria.

plus when the west or europe do sanctions on actual arabs, they do it to the poor people, not the brutal saudi monarchy, whom the actual sanctions should go on!

Have a great day!

We’ll see your sanctions and raise you some sanctions that will really hurt you, Turkey. Get ready to see a real movement to abolish dual nationalities.

Europe should do anything to show the mittefinger to erdogan…. these ungratefull turks are a plague in western europe….

Eastern Europe fights Turks for centuries, and Western Europe invites a few milions to come. You reap what you saw.

Last time Erdogan provoked a conflict with the EU (the “refugee crisis”) he won and Merkel came even to Istanbul to say that the outcome had brought Turkey closer to EU membership. As this was shortly before the elections in Turkey this certainly helped Erdogan to win.

Erdogan obviously is taking a risk. But maybe he is betting that the Dutch government will be more pliant when the elections of next Wednesday are over.

A classic case of the ‘pot calling the kettle black’ if I’ve ever seen one. ErDOGan is a literal Islamo-Fascist dictator and they have the nerve to slander others as “Fascist” for banning their attendance at one of their stupid rallies (in a foreign country). This will only result in Turkey drifting further apart from Europe, which is a good thing as far as most Europeans are concerned.

Turkey really needs to show some introspect for once, maybe the reason other countries don’t like it is because of the things it does, not because others are “Fascists”. hmm? Seriously Turkey has to be one of the least liked countries in the world and erDog-face is only making it worse. Literally the only one of it’s neighbours that actually likes it is Azerbaijan, partly because they both hate Armenia.

I’m suddenly reminded of a discussion I had with somebody here. About NATO coming to Erdogan’s aid in Syria if called for, to which I said, not bloody likely, because Europeans hate Crazy Erdogan’s guts. To which he responded, no biggie, the MSM will just paint the Great Sultan of Ankara in a positive light and public opinion in Europe would magically shift in favor of helping Turkey.

The Great Sultan of Ankara would first have to cooperate and stop, well, being crazy I guess. It would seem however he continues to delight in pissing off Europe, especially now, to drum up support for the referendum. Thing is, it’s election time in the Netherlands too. And both the party of Prime Minister Rutte and Islamophobe Geert Wilders are not doing well in the polls. The stunts Crazy Erdogan is pulling on us is a godsent too for both Prime Minister Rutte and Geert Wilders, just the thing they need to revive both their lackluster campaigns. If Turkey imposes sanctions on us it will be electoral suicide for Rutte not to respond back in kind. And we can hurt Turkey way more then it can hurt us. No more tourists for the Turkish riviera? No more pensions and welfare payments for Dutch Turks living in Turkey?

In the short term Crazy Erdogan doesn’t give a flying fuck if his actions tank the Turkish economy. But as Russia has shown, once the dust settles not even Crazy Erdogan is immune to economics.

Yaaawn! Stretch. Estrogen is full of gas. What fear the Dutch have of his sanctions? His oranges and grapes are going to rot in Turkey. That idiot is setting fire to his house, just to kill a bothersome fly inside.

Well well and wich countries send Patriot Missile Systems and personel to Turkey, to defend it against possible airstrikes or rocketattacks out off Syria? The Netherlands & Germany. On their own costs. What a facists countries they are, dumm oke, but facists?

Erdogan’s Syrian invasion is a flailing affair: currently being outflanked by SAA and SDF, so better come up with a quick domestic political distraction from it all, create the usual phony confrontation with an EU state, though probably better lay off Germany for a while, how about using the Netherlands this time around…