About a month ago the Naval Special Warfare Group 2 of Virginia Beach set the Twittersphere ablaze after video surfaced of their military convoy flying a Trump flag on their lead vehicle.

Photos and videos of the ‘event’ quickly spread around the internet and prompted a full Navy investigation into the incident.  Here’s a photo of the convoy: 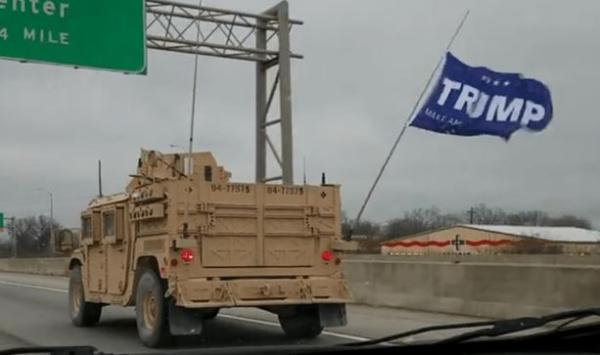 And here is the original video that made the rounds, complete with the full commentary of an obviously emotionally scarred Hillary voter.

Now, fast forward a month and Lt. Jacqui Maxwell has just announced that the world can go on spinning again because some of America’s finest soldiers have been appropriately disciplined for their ‘heinous’ crime.  Per the Washington Post:

Lt. Jacqui Maxwell, a spokeswoman for Naval Special Warfare Group 2, said in a statement to The Washington Post that punitive actions were taken but declined to comment on the precise nature of the punishment or how many individuals were affected.

“The inquiry was completed between the unit’s commanders and service members,” Maxwell’s statement said. “It has been determined that those service members have violated the spirit and intent of applicable DoD regulations concerning the flying of flags and the apparent endorsement of political activities. Administrative corrective measures were taken with each individual based on their respective responsibility.”

“Department of Defense and Navy regulations prescribe flags and pennants that may be displayed as well as the manner of display,” Maxwell said last month.

“Naval Special Warfare strives to maintain the highest level of readiness, effectiveness, discipline, efficiency, integrity, and public confidence,” her statement continued. “To this end, Naval Special Warfare leaders are committed to thoroughly and impartially investigating all non-frivolous allegations of misconduct. Where misconduct is present, the Naval Special Warfare commander responsible for ensuring good order and discipline within his unit will make a disposition decision as to the appropriate administrative and/or disciplinary action, if any.”

We don’t know about you but we’re ever so thankful for this special snowflake who helped to expose the hateful and insensitive actions of these soldiers.  Imagine if they behaved this way during a deployment…they might offend some terrorists and start an international crisis.

What’s the news here? Armed forces are not supposed to take any political stance in any civilized country. Those guys broke the rules and as such should get disciplined. Has nothing to do with Hillary / Trump.

But isn’t Trump constitutionally their Commander in Chief?

But that doesn’t change the fact that they’re not supposed to fly any political colours.

How do they know those guys and trucks were military? The cops in the U.S. are starting to gear up like that against their own dangerous, disobedient citizens, i.e., “potential terrorists”.. For all I know, that’s a Minnesota’s Hennepin County Sheriff’s SWAT team armored HUMVEE going to blow some girl’s arm off at a North Dakota pipeline protest. I suppose they would be flying a ‘Hillary’ flag, though. In fact, the armored HUMVEE could be one from Blackwater-like TigerSwan – a ‘security’ outfit headed by an ex-Delta Team serial killer that gets plenty of work in Afghanistan and Iraq. The North Dakota pipeline outfit hired their mercenaries to provide security for the firm’s pipeline IN NORTH DAKOTA. Hell, they could hire the SEALs in that picture and have them drive the same armored HUMVEE they drove in the military to keep the ‘little people’ of the U.S. obedient. If you’re going to hire jack-booted thugs to keep your citizen-peons in line, then you might as well hire the best. Note to ex-SEALs: have a back-up career. TigerSwan will outsource your a## to some third-world SF types and make you train your replacements before they fire you – you’re too expensive.

A sad day for me, a U.S. citizen, but the international readers have to be laughing at all of this. What comes around, goes around, U.S. imperialist bully a##holes. Reap what you sow.

Supposedly…. Trump opines the USA stay the fuck out of everyone else business.

Sorry for the length, but the Pissants need it to be force feed into their slumbering minds.

Yup, I agree with PW IV about this, so far the Wankees is ignoring the truth, this wars, where they are in fact loosing, of course they would do anything to keep it alive, and await the Go a head to attach Iran witch Trump promised a year ago, and have kept it so far, will one day come home.

The Standing rock is the fault line, and do notice all the wacko rules the N. Dakotans have made against anyone whom is protesting, like the fact, and this is no joke, you can drive down an protestor if they are in your way, kill em to, no problems, and so on, and the Wankees sheered, since they considered the Natives as scums whom is destroying the Wankeestans economy and oil productions, in fact most of the comments write as the Natives where Iranians aka Muslims. And the moronic Pissants cant see that this rules of engagements will soon be the norm, and when the economy starts to fall, civil unrest will escalate and then this rules will kick in nation wide. WE talked about it for years ago, well come to the New Palestine and people laughed at us. But now that narrative is kicked alive and Wankeestan will be the biggest concentration camp humanity will ever encounter, but hey, we are just conspiracy nuts, right.

The weird thing is why nobody does anything against Sore-ass, that alone tells me Trump is controlled opposition, and Pence is what they want instead, since Pence is the founder of Blackwater do notice even the so called alternative, Muhahaha Sites dont bother to mention that either, since its all about slaughtering Muslims. Most of the so called ALT SI.is 100% controlled by the Joos, forget them, and some of them are even labeled as anti-Semitic, witch is the clap trap to any mentally deranged Pissants, since I know that narrative is pimped to flush the Pissants to sites as InFo wars, BreitFartings whom is 100% Israel controlled, to label this Islamophobic shitholes as anti-semitic is an force contradiction made to fool people to belive everything this rats drool in their corner, BreitFartlings are 100% Jooish. Period. And so on. Smart, I would do that, nothing is better than an 100% controlled opposition, just ask the Russians. You see, and right now, Christians whom have silently complied to this religious hate propaganda, since they believe everything they see and read, dont realize that they are the next phase, they, the Christians will be attached for been “anti-Semitic” and deliberate promoting Joooish hate. Aka antisemitism, Hehehe Stupid ignorant pissants.

Just watch the freak show its coming, in Norway we are all racists, no exceptions, and that comes from, ges whom, a Jooo, and all tho we know the same people created this wars, and thereby the refugee problem, is now howling at us for been evil for not allowing rapefugees to flood our land.

I know the war comes, and civil wars all over the European lands, will be coordinated simultaneously, and this will force the world into been polarized and diverted by an civil war, since I know Trump will attach Iran because Israel and the Joos wants that. Weird, nobody ask the Jews in Iran about been slaughtered for the Jooos in Israel. Strange isnt it and I am an anti-semit.

Wake up, Trump is the same as Obamalama, the strategy is the only difference, the goal the same, full spectrum dominance. God you are blinded. And the Russians is scary naive, the rest I dont give an rats ass for, because WE know they dont care a bit, they to are dangerously naive like China.

PS: One bank to rule them all, into darkness binds them, and darkness blinds them, and when you awake you will be chained to the floor, then Pissants it will be to late, we are there right now.

I and my family is right now attached by My own gov. thru white washing rules, yeah, use whatever means they have to silence anyone that they dont like, and our Gov. is using DNB the bank to do so. I dont know whats next, I dont have anything to hide but My wife is Russian, and I have not an “Norse” name, but thank god our Girl is not an child or the Norwegian child protecting agency wuld have snatched her away from us. Welcome to Norway, 2017 the hunt for dissidents is coming, the purge is been awaken. So if I suddenly disappears, I have been forcibly removed, so somehow this sites is becoming vital for anyone whom is opposing this collective madness.

May the lord have mercy upon us all.

We as a country stand united against hate and evil. You are a Nazi. You are America’s enemy. You are an ignorant, uneducated piece of sh it. We defeated the Nazis once; we’ll do it again. Make America great; shoot yourself in the head. Though by your inability to spell or write a proper sentence, I doubt you’re an American. Peace.

Sorry for the length? You should be sorry for a lot more than that. What a friggin’ hate-fuelled lunatic. You don’t know anything about America, do you? My God is Jesus, who was a Joo. Rot it hell, scum bucket. And learn to write and spell if you’re going to pose as an American. Peace.

time for revenge will come all you liberal faggots…