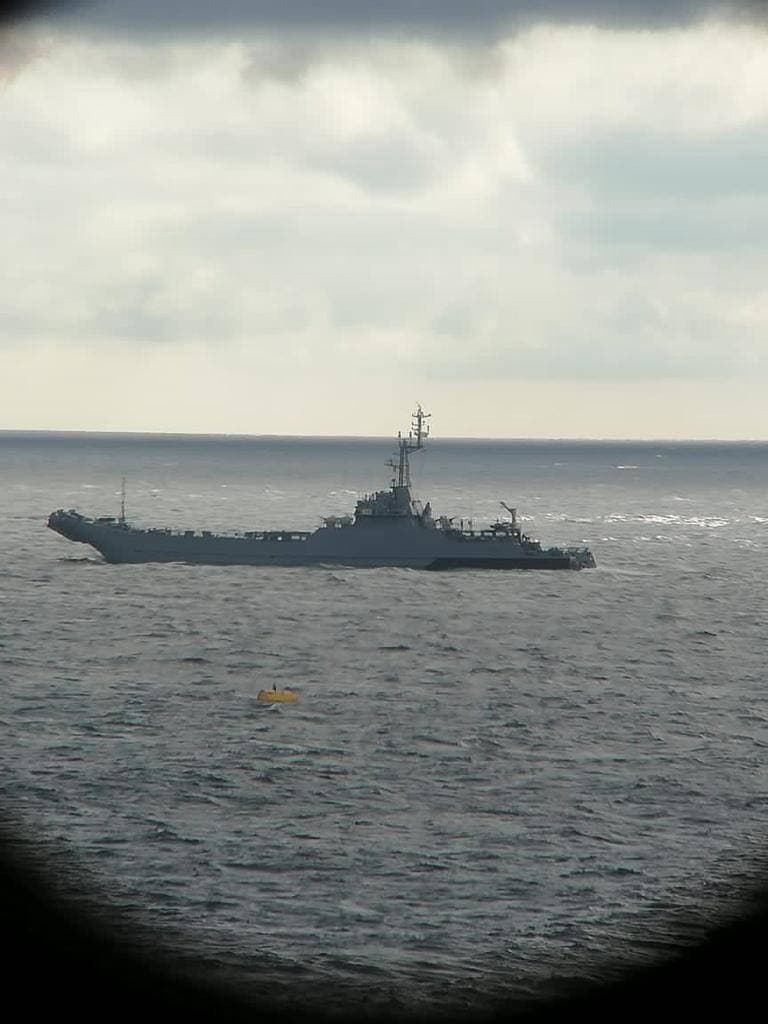 Nord Stream 2 AG, the operating company of the Nord Stream 2 gas pipeline construction, reported provocations of warships and civilian vessels in the security area of the project. According to director of the company’s branch office, such hostile actions may lead to emergency damage to the gas pipeline.

“We are talking about apparently planned and prepared provocations, both with the use of fishing vessels and warships, submarines and aircraft in order to obstruct the implementation of the economic project. This is perhaps the first and unprecedented case of this kind in history. “ 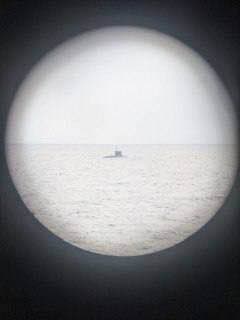 The unidentified submarine that surfaced near the Nord Stream 2. Click to see full-size

On March 28, an unidentified submarine appeared on the surface in the security zone of the pipe-laying vessel “Fortuna” at a distance of less than one mile, while the 1.5-mile security zone was established for the Nord Stream 2 project.

“Given that Fortuna’s anchor lines are located more than one mile away, the submarine’s actions could have disabled the entire pipe-lay barge’s anchor positioning system and lead to accidental damage to the pipeline.”

Warships of foreign states are constantly passing in the vicinity of the technical vessels conducting construction of the pipeline,  and at the Polish anti-submarine aircraft PZL-Mielec М-28В1 Rbi is also regularly spotted at low altitude and at close range.

A video allegedly showing a Polish ship ramming Nord Stream 2 supply vessel emerged online amid the claims of provocations. No exact information on time and place where this video was made was not provided.

The construction of Nord Stream 2 stands pressure from the United States, Poland and Baltic States. Washington claims that the pipeline poses a threat to Europe’s energy security, aiming to conquer European markets for American shale gas. After having imposed numerous sanctions against companies involved in the construction of the pipeline, the U.S. together with Poland demonstrate their reediness to resort to military methods. The U.S. desperation is evident, as they only managed to slow down the pipeline project, but not to stop it. Berlin steadily proclaims its commitment to Nord Stream 2, and the project should be accomplished this year, since the work is 90–92% complete.

About time the Belgorod was sent to check on Atlantic and Pacific communication cable lines then.

Be careful not to drag an anchor over them accidentally, and all that, lol.

Good idea! Will Putin have the guts to act this time?

If it happens you will never know because the who and what will be uncover only the U.S, will whine and bubbler.

Once he slurp Chickenshit Satanyahoo rectum until he drops asleep, he may do it..

Reduced to loitering about.

Sanctions have failed so now its sabotage intended to look like an accident.

Funnily enough I had a discussion with another Southfront reader , about the need for Russian security above and below the pipeline last year.

NATO divers are prone to swimming around in Syrian waters and disrupting pipelines, so its certain that such criminality has been discussed regarding NorthStream 2.

Juden slaves are having a nervous breakdown. They’re in retreat mode everywhere.

Question: When have the Poles ever successfully kept the Germans and Russians from doing anything?

It looked like a German U-boat. Definately not a nuclear sub. Non the less these terrorists pirates should eff off and leave North Stream 2 alone. Russian subs can play games too… Lets not enter full retard mode…

Germany and Britain both rely on Norwegian pipes for energy.

If a “pipe war” breaks out, then the maritime coastal states suffer most. As long as the maritime powers recognise that, things shouldn’t get out of hand. The real problem for them, is they are unable or unwilling to recognise indisputable facts.

I doubt the Germans are behind this, considering they themselves would be profiting from this pipeline, I suspect the Polaks are behind this, and it is Germany’s responsibility to keep them on a leash, if they want that oil and gas from NS2

No it wouldn’t be the Germans, they want the project. It’s probably some dutiful little Yankie cock-holster like Norway or Poland.

Pooland most likely as their antisub aircraft is also involved in flying over… These Poojews love to slurp the US rectum and will do anything for a slurp anytime, until Pootin gets OK from Chickenshit Satanyahoo to blown away the Pooland boat.

According to Tommy, Putin plans to pump Novichok into through this pipeline! A grave security risk!

Yet another act of intimidation in order to make them feel relevant.

Those bastards are asking for it.

A massive Ukrainian attack on the Donbass that threatens Russian-speakers will cause Russia to directly intervene — as the Americans plotted, the EU uproar will lead to the suspension of NordStream 2 … if there is a good side, the Russians would give the Ukrainian army such a massive thrashing that there would be no further threats in the future.

Also, stopping NS2 would be detrimental to the economy of Europe.

It’s a silly fiasco. Attempts to damage the pipeline and construction in place can easily result in severe damage to their surface and subsurface provocateur boats. Colliding with an anchor is never a pleasant experience.

There’s a legal side to the fiasco. One is the activity of these boats is illegal, but I mean something different.

The boats are unclaimed – no flags, no markings. If Russia decides to sink them (which is possible even if unlikely, it depends), then somebody will need to claim them or stay silent. If they claim, they expose themselves and actually such a claim would be quite futile in legal terms.

This means that by setting cowardly unmarked boats to interfere with civil activities, they open themselves to a hunting season, where they are the prey. If it’s a Polish ship but not marked as one, then Poland cannot legally claim that sinking such a ship is an attack against the state of Poland as a legal entity.

That would be a bad move, markings or not.

Yes, and completely unnecessary as well. I’m just posing a mind game, not a practical suggestion (not that anyone in power listens to my suggestions).

Thats what Russsia should do,or maybe board one of those boats with Marines from patrol boats and Choppers ,then they would know who those bastards are.

It is necessary for Russia to control every inch of the country in such a scenario, so that Nato isn’t fast enough to deploy troops there, basically they must directly have a second border with Poland

If Russia fires one shot at Pooland, most of these Poojews will get diarrhoea immediately, running en mass to the loo

I thought Poland was based but I guess I was wrong They are based because they have lgbt-free zones and closed borders, also Soros isn’t allowed to go there

look waht these bastards are trying to do: https://halturnerradioshow.com/index.php/en/news-page/world/west-using-polish-navy-and-submarines-to-intentionally-damage-russia-s-nordstream-2-pipeline-construction

All this activity ……because sanctions are not working. Surely Russia can deploy from the Northern fleet some surface combatants and subs to ensure safety guidelines are maintained.

I’d imagine the offshore windfarms must be connected to the mainland somehow?

Sure. Nothing at all to do with the planned Israeli pipeline to Europe that will be built by U.S. taxpayers. Completely unrelated. Of course, the U.S. will then have to stop shipping our anti-Semitic shale gas. It will be cutting into Israel’s right to profits.

Clearly aggressive action by the pipe-laying vessel. Just how dumb/drunk does a Polish fishing boat captain have to be to even attempt this? He nearly capsized his f’king dinghy. https://uploads.disquscdn.com/images/a3b0186b8c616a2dacfcdea93ebbdeabea9dd5f98815412d9ef78e21cb509a73.png

🤣 🤣 🤣.. Should of capsized…. then he would of been asking the same vessel he rammed for help

The video is quite funny actually.

Polack crew was occupied changing light bulb in the wheelhouse

He was probably high on the Drug of US prostitution.

dumb pollocks remind me of a little toy poodle, lots of yapping/barking but not enough bite

We and our Allies have the right to sail in International waterways of free navigation without being harassed by a dictatorship gas pipe which is sanctioned by the free and civilised world.

Good one Tommy, only the US has sanctions on Nord 2, and I doubt they qualify as the free & civilised world

Are you on Biden’s press team now? :)

Just some food for thought…. I wonder what the outcome would be if Russia just stated that if the NS2 pipeline wasn’t allowed to complete it’s contractual obligations due to interference from others, that the gas contract with Ukraine would either not be renewed or maybe even terminated.

That really would be Europe’s just desert :)