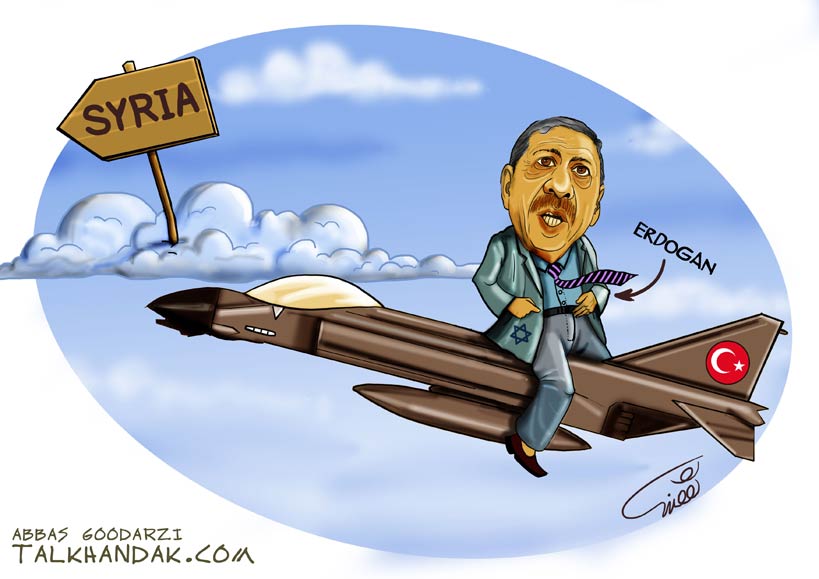 Appeared at A-specto, translated from Bulgarian by Borislav exclusively for SouthFront

The theme for introducing Turkish, and then Saudi troops on the territory of Syria appeared as soon as when on the 3rd to the 4th of February negotiations in Geneva were suddenly suspended. That led some observers to suggest that the whole scenario of the negotiations was only a formality to justify the subsequent course of escalation. However, it is far more likely that the troops will remain in the barracks. This does not mean a peaceful future. There is evidence that Saudi Arabia may seek its own solution to the Syrian problem through Ukraine.

The biggest threat, of course, stems from Turkey. The situation in Syria for Erdogan is not just sad, it’s disastrous. His clients are kicked out of North Latakia and give way to government troops in Aleppo. Moreover, Moscow and Damascus find a common language with the Syrian Kurds (which Turkey and the United States have repelled even more, the Turks strongly protest against Kurdish participation in the Geneva negotiations, the Americans agreed).

In view of the current status of the Russian-Turkish relations, in which Putin does not answer the insistent calls of Erdogan, it’s simply unrealistic for Turkey to negotiate with Moscow about the termination of the government offensive, or about the isolation of the Kurds. Which means that Turkey has two options. The first: to “sit tight” and watch as on it’s borders appears a hostile state with a Kurdish autonomy in its composition. A country that will hold Ankara responsible for all the “good” done by the Turks during the Syrian civil war. The second outcome for Turkey is to take action to prevent the described scenario. Such an action could be a Turkish invasion of northern Syria, the destruction of Kurdish troops and the deployment there of Turkish garrisons “to protect civilians from the Russian-Syrian warmongers.”

As a result of such actions Turkey may not only postpone the solution to the Kurdish problem, but create a buffer zone along the border with Syria. The reasons for such a decision are the Turkish warnings to the Russian military space forces in Syria that supposedly regularly cross the Turkish border. “We once again warn Russia. The damage that Moscow causes to the representatives of the Syrian opposition and the threats to Turkish airspace will not bring Russia any good,” said Turkish Prime Minister Ahmet Davutoglu, adding that Turkey” has taken all necessary security measures along the border with Syria.”

However, the Turks are reluctant to make this decision because they are not sure of the main criterion of success – guarantees for Russian non-interference. Only on condition that Moscow looks the other way to this intervention, does Turkey have any chance of success. Otherwise, the intervention will end with Turkey’s military, political and economic catastrophe, that can not only lead to regime change in the country but also to its disintegration.

And Moscow will respond …

If Turkish troops enter the territory of Syria and start fighting against Russian aircraft, then Moscow has every reason to turn all Turkish armor over the Syrian border, in a pile of scrap metal. There’s no hope for help from NATO. This will not automatically activate the corresponding Article of the Washington Treaty, because there will be no attack on Turkish territory. The question is how will NATO react.

The alliance may still enter the war on the side of Turkey. But such a reaction is unlikely or simply unrealistic. A number of NATO countries will benefit from the optional nature of such a decision (in terms of the statutes of the Alliance) and even under the pressure from the US, they would be unwilling to start a military conflict with Russia over Turkish nonsense. On the other hand, if NATO remains aside, it would be politically incorrect, it would bring a schism in the alliance and would undermine the credibility of it’s political guarantees.

It looks like that options are bad. The conflict between Turkey and Russia is advantageous for the Americans, but only to the extent that it does not develop into full-scale war. It is logical to assume that NATO will select a third, preventive option: to prevent the emergence of such a development and to force Turkey to abandon all plans for intervention.

The above arguments against a Turkish invasion draw on logic, but the personality of the Turkish president should not be overlooked. It is entirely possible for Erdogan to take an illogical decision to put troops simply because he wants to. And if his own generals don’t stop him, much will depend on Moscow. If Russian troops begin to smash Turkish armor, Erdogan’s allies will get him out of Syria, and possibly out of Ankara. However, if Moscow shows weakness, the Turkish president will be a hero, and the Kremlin will have to withdraw early from Syria, and then the post-Soviet space.

For Saudi Arabia (to which defeat in Syria is also extremely painful) everything is much simpler. Early proclamations of the kingdom’s intention to send troops to Syria produced a thunderous effect. But almost immediately they made it clear that they are ready to send troops only as part of an international contingent. i.e. after the introduction of an American or Turkish army. Saudi Arabia will not fight alone, simply because there is no way – it wages war in Yemen which is losing, and it has no extra funds for Syria. Allies will also not give contingents – neither Jordan nor Egypt will go to war against Russia, but also against Iran (whose soldiers act in Syria).

In turn, the Americans also do not need a hot war between the Saudi bloc of Gulf countries and the Islamic Republic of Iran. In this case, Washington will have to take neither side, and that means either crossing out the important for Obama regulating of relations with Tehran, or to violate guarantees to the Gulf.

But the kingdom could find another ally to organize a war against Moscow. True, not in Syria, but much closer to Russia’s borders. Ukrainian media, quoting the Saudi newspaper “Al Watan” wrote of the intention of Riyadh to invest up to $ 10 billion in the agriculture in Ukraine. This news, although peaceful in character is more than alarming. Yes, Ukraine has a rich black earth, but what reasonable people would invest such money into a country with unstable power that is in a state of civil conflict? Tales of how the Saudis do not know their money is already old – Saudi Arabia has a 100 billion budget deficit and has already started to introduce taxes. And if these 10 billion (or rather a smaller amount) are given for a specific task to resume the war in Donbass and to sideline Russia away from Syrian issues, then the investment will probably seem justified.

Turkey, the Saudis and Israel have developed an alternative and it was considered at the Munich Security Conference this month. see: http://www.mintpressnews.com/israels-defense-minister-exposes-israels-divide-and-conquer-regional-strategy/214046/

They propose to partition Iraq, Syria and presumably Turkey into ethnic / religious cantons governed by their respective warlords. John Kerry today announced that as his “plan B” if the ceasefire fails.

Such a move might considerably reduce tensions but I doubt it would work in the long term as it might ferment partition in Saudi Arabia and then other states and the whole middle east would start to resemble Palestine or Yemen.

It would certainly enable the Kurds in Turkey to choose who they might federate with and could well establish peace in Turkey so that it might get on with prosperity again.