NATO believes that the Western Balkans is a region of strategic importance. The summit that was held July 11-12 specifically expressed support for the Euro-Atlantic aspirations of the Balkan countries. Macedonia was officially invited to join the alliance.

On the eve of the summit, Deputy Secretary General of NATO Rose Gottemoeller stressed that NATO supported the process of reform in Kosovo, including the creation of its own regular armed forces. That idea has strong support in Washington, although by establishing its own military, Kosovo would be in gross violation of the existing international agreements. UN Security Council Resolution 1244 states explicitly that no other military presence, with the exception of KFOR and the Serbian army, shall be permitted without the mandate of the UN Security Council. The Florence Agreement (Article IV of the 1996 Dayton Peace Accords) affirms that regional stability should be maintained with the assistance of the OSCE, not NATO. The creation of a Kosovo military would mean that a regular force was being established within the territory of Serbia, which is a party to the Florence agreement. 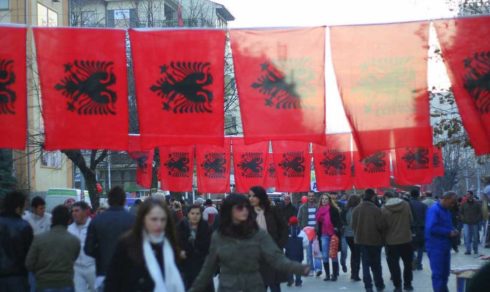 NATO has already allowed Kosovo to set up a professional security force, which is to join the Partnership for Peace (PfP) program and then develop into a regular armed forces that is able to meet NATO standards. This idea is being floated at a time in which the concept of the creation of Greater Albania is gradually taking shape, which would include Kosovo, parts of Macedonia such as Tetovo, the Presevo Valley in Serbia, and parts of Montenegro such as Malesija.

The EU has also gone on the offensive. Croatia joined it in 2013. Albania, Macedonia, Montenegro, and Serbia are EU candidate states. Bosnia and Herzegovina and Kosovo are signatories to Stabilization and Association Agreements with the bloc. In 2016, Bosnia and Herzegovina formally submitted an EU membership application.

Efforts to reduce the region’s energy “dependence” on Russia are underway, as an element of the policy of “squeezing Moscow out.” The Trans-Adriatic Pipeline (TAP) project is in the construction phase and will eventually stretch from the Caspian Sea to Albania and northward to other Western Balkan countries, as well as Italy. The next step is the building of a floating liquefied natural gas (LNG) terminal on Krk, a Croatian island, thus making the countries of the region pay much more for American sea-transported energy than Russia’s natural gas that is supplied by pipeline. The Krk project is to include Slovenia, Hungary, Bosnia, and Serbia.

The NATO-EU Statement on the Implementation of the Joint Declaration envisages close cooperation between the two groups, which will increase Western influence in the region. That’s what Russia opposes. It rejects the wisdom of an approach in which the region is viewed as a battlefield between the West and Russia (which is supposedly vying for influence), forcing the nations of the region to take sides. The truth is, they don’t have to. For instance, Serbia can derive significant benefits by promoting complementary relationships with the EU and the Russian-led EAEU.

The Atlantic Council’s report, titled “Balkans Forward: A New US Strategy for the Region,” which was released in late 2017, attracted a lot of attention. It calls on the West to double down on countering Russia’s influence in the region, including by means of a permanent American military presence in the Balkans that would “anchor the United States’ ability to influence developments.” Camp Bondsteel in Kosovo, which was built on Serbian soil without consulting that country’s own government, is not enough. The Heritage Foundation echoes this view, offering guidelines to spur US diplomatic, economic, and military efforts to drive Russia out while bringing the US in. The think tanks from the National Committee on American Foreign Policy and the East-West Institute chimed in with their joint report, titled “Time for Action in the Western Balkans,” which was published in May.

The think tanks’ recommendations are followed by suggestions from governments. Here is the latest example. On Aug. 4, Albanian Prime Minister Edi Rama announced that NATO plans to build its first air base in the Western Balkans near the municipality of Kucove in south-central Albania. Construction is to start this year. The new facility will be used for air supply, logistic support, air patrolling, and training. The base will also be used by the Albanian air forces. The US Army’s Bondsteel base in Kosovo is used by KFOR but it lacks an airstrip for planes.

On Aug. 2, Kosovo’s President Hashim Thaci said in an interview with VOA’s Albanian Service, “Kosovo’s border with Serbia needs to be redefined, or corrected.” Whatever he meant, no mention was made of any need for Serbia’s consent or United Nations-approved procedures. Mr. Thaci feels free to make such statements because he senses the West’s support behind him.

Meanwhile, tensions in northern Kosovo are rising after the Aug. 4 deadline to establish Serb-majority municipalities in Kosovo with limited autonomous powers was missed. The Kosovo provincial government has not kept its promises. Such a move is necessary in order meet the provisions of the EU-brokered 2013 Brussels Agreement, which is intended to normalize relations between Serbia and Kosovo.

The Kosovo Serbs say they would declare autonomy if Kosovo’s rulers’ fail to produce a draft statute of the Community of Serb Municipalities (ZSO). That agreement provides for the merger of the four Serb municipalities in the north (North Mitrovica, Zvecan, Zubin Potok and Leposavic), which are subject to Kosovo law. This urban district would have powers over economic development, education, healthcare, and town planning.

On Aug. 4, Kosovo PM Ramush Haradinaj warned Serbs in the northern section of the province that their potential “attempt to proclaim autonomy” would be met with a response, obviously meaning the use of force. Serbian President Aleksandar Vucic vowed action to protect his compatriots residing in Kosovo. KFOR is in a state of combat readiness, because NATO has failed to prevent a conflict between Kosovo and Serbia.

KFOR entered Kosovo in 1999. The Albanian government of the Serbian province fully depends on the West. As recent events convincingly illustrate, after all these years, nothing has been done to solve the problems of the Serb minority or even to get closer to a solution. The ethnic divisions in Macedonia and Montenegro remain. Bosnia Herzegovina is still a divided country on the brink of armed conflict. The Western Balkans has not become a second Hong Kong or Singapore, even after some of the regional countries joined the EU. Neither the ethnic nor the religious divisions were successfully addressed after several Balkan nations joined NATO. If there is any outside security threat, it comes from the North Atlantic Alliance, which has proven its readiness to use force to reach its goals in the region. A NATO air force base in Albania will hardly make the life of ordinary people living in the Western Balkans better or more secure, but it will certainly bring the concept of Greater Albania closer to reality.

Typical Yankee policies of turning thriving countries back into The Stone Age. Once again, Yankees are succouring Headchopper Moslems ,proven to be have always been hitmen and drug dealers,to the detriment of the stainchest anti -Takfiris in Europe. Poor Greece and Serbia ,constantky fucked by its allies in WW I and II. Still the writing was on the wall since 1974 ,when the West allowed headchopper Takfiri-Turks-to invade Curprus with nit even a slap on the wrist.

Wont be long Merkelistan and Francistan,your turn will come. Uncle Sam will sell you out within twenty years to pleaseTurkey and Saudi Arabia. That will be your just desserts.

Fuck you Clinton. Should have impeached his sorry ass when we had the chance.

Kosovo now is 100 times worse than it was when it was a serbian majority and under serbian governance. Currently the economy is under the brink of collapse, there is a shortage of clean drinking water (again), people dont have momon because there are no jobs let alone higher education jobs like medicine, science, etc. Serbs are still being squeezed out of their remaining land, war criminals have not been brought to trial, human, organ, and drug trafficking has only increased and the movement of heroin from afganistan has not been reduced by any amount. Mafias rule kosovo whether its illegal gangs or the “legit” government. If these issues dont change serbs will take action and unfortunately revenge. This time it might even be bloodier than the last since memeories are still fresh in the minds of the serbs, both in Bosnia and Kosovo. Unfortunately thats the situation and when another conflict breaks out you can bet anything that Serbs will be portrayed as the enemy once again. I sincerely hope Russia helps the serbs this time because if they help syria this much, id expect much more for their historical and religious orthodox ally in the balkans.

as
Reply to  Cat

Their citizens will suffer heavy or decadent economic and infrastructure due to heavy toll of these “NATO standard” army. Namely buy our shit stuff standard army.

Kosovo Is Serbia. Golan is Syria Crimea is Russia.

and Siberia is China

And Macedonia is Greece!

Macedonia is what Macedonians wants to be

And Macedonians are Greek.

Well, I think they all disagree

Because of the American propaganda.

History amd language matter, not the feelings of some bulgarians.

That Albanian Flag is most Ugly and Disgusting flag that exists on this earth……..!!!!!!!