The annual multination training event organized every year since 2010 is being held across the training areas in Poland, Latvia, Lithuania and Estonia. Non-NATO countries taking part are Finland and Macedonia. Air assault landings are part of the scenario to hone the skills for launching offensive operations.

Sabre Strike is timed with Swift Response airborne drill in Latvia to culminate on June 8. It involves 800 paratroopers from US, Latvia, Lithuania, Israel and Poland.

There will be more exercises held in 2018 near Russia’s borders, including Trident Juncture, a really big one to take place in late October-early November to involve 35,000 troops from 30 nations along with 70 ships and about 130 aircraft and Anakonda organized by Poland in November. The latter will involve 100,000 servicemen, 5,000 vehicles, 150 aircraft and 45 warships. The scale is mind-boggling. One can imagine how much it costs! The Anakonda scenario includes preemptive strikes. If it’s not an open preparation for war than what is? US Army Chief of Staff Gen. Mark Milley believes it is. According to him, “Having large-scale NATO forces in the Baltic States and Poland, as well as the lack of transparency – we see serious preparation for a great war.” He knows what is talking about.

In May, NATO held a large Siil (Hedgehog) exercise in Estonia and northern Latvia involving more than 15 thousand troops. The series of training events are conducted against the background of the proposal put forward by Poland to deploy US troops on its soil with Warsaw shouldering the financial burden of base construction. A NATO annual summit in July will consider the issues related to further reinforcement of forces in Europe, including the eastern flank.

It has been revealed recently that the alliance plans to create an addition to the NATO Response Force (NRF) increasing its strength from 20,000 to about 50,000 by creating a pool of 30,000 troops with organic aviation and ships ready to be operationally deployed within 30 days. The initiative belongs to the US with Germany to take the lead. The bloc’s defense chiefs will discuss the issue at their upcoming meeting on June 8-9 before putting it on the agenda of NATO summit to be held on July 11-12. NATO war preparations against Russia include the new crisis response command center in Ulm, southern Germany, and another one in the US state of Virginia.

This force as well as other units will become part of training events and the soldiers will be deployed on temporary basis but holding regular exercises presupposes the creation of infrastructure to be used by troops upon arrival for launching offensive actions. Correspondingly, logistics are being beefed up.

There is fresh news to hit headlines before the July summit. Discussions are underway to deploy US THAAD air defense system in Germany. The move would plug a radar gap emerged as a result of postponing the deployment of a second Aegis Ashore system in Poland. The Polish government has announced plans to purchase US Patriot PAC-3 MSE air defense systems.

Both the THAAD and Patriot have rather limited capability against sophisticated ICBMs but Aegis Ashore is more effective.

Modernization will take place, advanced missiles and systems will be moved to the already existing sites. The main thing is that the infrastructure, the foundation to build ballistic missile defense and surface targets strike capability on, will be in place. And the only target is Russia. The Aegis Ashore can launch intermediate range surface-to-surface missiles against Russian territory in violation of the INF Treaty. In a couple of years, Poland will host it. The THAAD’s radar can greatly enhance the Aegis Ashore capabilities by relaying data to them. The AN/TPY-2 has an estimated range from 1,500km (932mi) to 3,000km (1,864mi). The maximum instrumented range is 2,000km (1242mi) to enable it to monitor large chunks of Russia’s territory.

The INF Treaty is teetering on the brink of collapse. If torn up, the infrastructure in question would be just the thing the US would need to station intermediate range forces in Europe with the means to protect them already in place. F-35s incorporating B61-12 nuclear precision guided munitions would also be under the umbrella of air defense systems in place formally deployed to counter the non-existent threat coming from Iran.

The NATO summit in July is to focus on “Russia threat”. The extraordinary scale of military exercises conducted so intensively with scenarios that include bringing in reinforcements to advance, not take defensive positions, the creation of infrastructure at Russia’s door and preparing the logistical base to provide for offensive operations will be described as the least the bloc can do while facing the superior enemy. Provoking Russia to take steps it would not take otherwise is the sure way to return Europe to the Cold War days.

NATO could have chosen a different approach of solving the problems at the round table but it did not. The European Security Treaty (2009) and the Agreement on Basic Principles Governing Among NATO-Russia Council Member States in the Security Sphere (2009) proposed by Russia were rejected off the cuff without any attempts to seriously negotiate the proposals. The 2016 German initiative to launch talks on a new European security agreement was greeted to be swept under the rug afterwards. The May 31 NRC meeting was devoted more to the Skripal case than European security and arms control issues. Actually, NATO has not lifted a finger to dissipate tensions. Instead, it is rapidly increasing the tempo of military activities near Russia on unprecedented scale, undermining whatever is left of European security. The alliance has made its choice, giving preference to the policy of provocations.

Russia must be having a good laugh, if shit hits the fan the first strike from Russia would be the US and it’s leaders, the Europeans who are conditional cowards will run for cover. Game over.

The funniest part will be the reaction of the American people, who will not understand why they are getting vapourized.

Now Sinbad, when in the process of being vapourized which takes nano seconds, it would be extremely difficult if not impossible to try to understand anything while you are turning into another form of matter.
Russia has given the West/US plenty of subtle hints without directly threatening them.

Well not everybody will get vapourized, and when 911 went down, I remember this American woman asking, why do they hate us so much.
Maybe it was was the millions of Arabs the US killed?
Same with Vietnam, we killed 5 million of them, but Americans think they are allies?

Americans don’t seem to be able to join the dots.

The whole of the US will be wracked by massive panic just like in Hawaii when they thought a missile was inbound.

There’s a war brewing. You keep pushing some people and they get intimidated and back off, or posture themselves to boost their flagging ego, in an attempt to counter-intimidate the aggressor. With Russia it’s different. They will complain and protest, but keep their cards very close. Then, when pushed too far they will strike back. Everyone reacts differently when under threat and Russia is no exception . .

I took part in a NATO exercise in Germany. It was organised chaos from beginning to end. All bullshit.
NATO realises that any invasion of Russia will see their NATO girls , boys and not sure’s , being vaporised.

It was the same in the 70’s/80’s. The British Army of the Rhine and US etc were expected to have massive losses in any initial attack from the USSR.

Today it will be NATO that are the only prospective attackers and NATO troops will litter the ground in mangled and burned heaps if they do.

I am sure that many will reach the Compensation Tribunals :)

“Not sure’s” Lol, that made made my day.

The UK military is reduced to recruiting on Facebook now :)
All for the New Digital Army that in reality will be akin to a Video Game BUT with real bullets, shit and blood .

You are of course right, but the Europeans want to trade and grow rich with Russia.
Peace and prosperity between Europe and Russia is not in Americas interests, so they invent enemies, it’s the American way.

Remember Granada?
President Raygun was going to lose the election, so he invented Cuban terrorists in Granada and saved the Granada from peace and prosperity. The American people love to see “their guys” killing a bunch of people, and Raygun won the election.
It’s the American way.

Also with Iran and North Korea where there’s no good scenario resulting from it’s simulation.

what year you involved ? what unit you in ?

It was 1969 if I remember with an infantry battalion.

are you civilian observer or in the infantry batallion ?

… and the Russians are training in as if in preparation for war with NATO (with equally exaggerated political effect). Seriously, it’s apart of cold war deterrence. Don’t try to dress it up a ‘provocation,’ whatever that’s supposed to be.

These and all NATO troops need to be fighting abortion banning, ISIS or Taliban, not threatening abortion rights defending Russia!

” Scaring Russia..”
Yeah, ….. and the Russkis look like scared to death , right? They could f*ck that whole NATO-circus with a single Iskander and then go back quick to their lunch, till it doesn’t get cold. 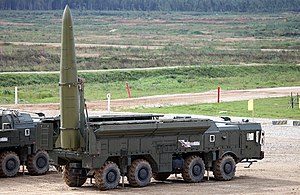 Major Problem for NATO is missing soldiers, besides some rabid Polish or Baltic there are simply no numbers for other than some limited spreading democracy exercise.

Another thing missing is the money, let alone the popular support.

The Poles make me sick! Always licking the boots of the Yanks and in time not only their boots!

These NATO games are probably going to scare the Germans, French and Italians a hell of a lot more than it’s going to scare the Russians. As for the Poles they once again are showing themselves to be the masters of undermining their own national security and it’s just more of the same from the Baltic states. Those nations that have a burning hatred of Russia will forever be mere pawns of Russia’s geopolitical rivals and that is nothing new.

It’s a bit stupid to scare someone who has 4000 nuclear weapons….
It’s a lot more bit stupid to let someone else do it in your own back yard.

the fools in polish govt and baltic nations are the ones that allow their nations to be used as pawns for geopolitic nonsense.. the prime security risk in western europe is internal , radicalization of muslims.. Russian threat is nonsense , the NATO training is just media dog and pony show.. if NATO entered russia they will get blasted by nukes the moment they cross the borders..