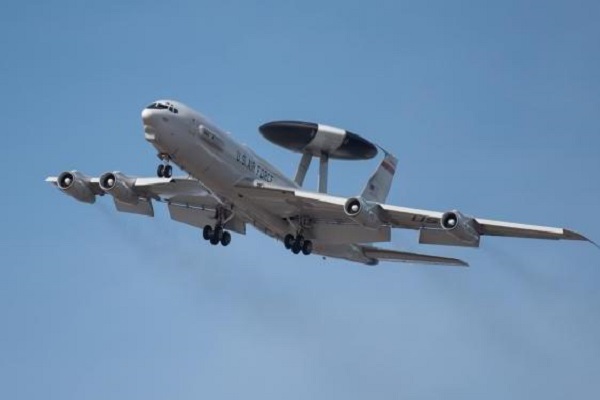 In addition to the militarization of Eastern Europe, NATO partakes in active intelligence operations – be it by land, sea and air.

There are numerous reports of various intelligence (spy) aircraft going and even entering Russian airspace, and the Russian Aerospace Forces intercepting them.

As for February 11th, 2016, “the AWACS aircraft completed the 1,000th mission in support of NATO reassurance measures. These measures are a series of land, sea and air activities in, on and around the territory of NATO Allies in Central and Eastern Europe, designed to reassure their populations and deter potential aggression. They are taken in response to Russia’s aggressive actions to NATO’s east.”

NATO’s E-3 AWACS fleet is predicted to retire around 2035. At the Warsaw Summit in 2016, Allies declared that “by 2035, the Alliance needs to have a follow-on capability to the E-3 AWACS. Based on high6level military requirements, we have decided to collectively start the process of defining options for future NATO surveillance and control capabilities.” This effort has since been carried forward as the Alliance Future Surveillance and Control (AFSC) initiative.

Most spy plane flights are by US aircraft, and not NATO one.

In 2018, the Russian army detected about 3,000 foreign aircraft, including a thousand aircraft and spy drone, near Russia’s maritime and land borders.

In addition, the US frequently attempts to enter Russian airspace with its spy planes. Following are some of the more recent examples:

Similar flights are a constant, most of them focused on the Donbass, the Baltics and the Black sea. That is no surprise, since the Baltics are a hotbed of NATO military build-up and so is the Kaliningrad area. The same goes for Crimea and the Donbass (with the Donbass not by Russian forces, while they’re still blamed for it).

On January 24th, even a NATO partner nation – Sweden – sent a spy plane, which was intercepted by a Russian Su-27 Flanker fighter jet.

On March 7th, a Russian Su-27 Flanker fighter jet approached and shadowed a US RC-135 spy plane over the Baltic Sea.

“After the withdrawal of the foreign aircraft from the Russian state border, the Russian fighter safely returned to the airfield,” the Defense Ministry wrote. Of course, Russia was condemned for its “aggressive” conduct.

Separately, Poseidon P-8 anti-submarine aircraft, with intelligence capabilities frequently patrol the Black Sea and the Baltic Sea, checking Russian submarine activity. It most recently happened on May 21st, it usually flies out of Sigonella, Italy every few days.

On average Russia spots upwards of 20 foreign spy planes along its airspace, while it intercepts only some of them.

In April 2018, US provided $3 million in funding, Latvia would be provided with RQ-20A Puma UAVs from AeroViroment to help enhance their monitoring and reconnaissance capabilities.

US forces deployed in Lithuania would remain there, as per a report from April 4th, 2019.

As part of the agreement, Lithuania’s Defense Ministry will provide all necessary support for the deployment of U.S. forces.

NATO maritime surveillance activity along the Russian border is also not falling far behind.

On April 30th, the HMS Echo surveillance ship arrived in Georgia for the 2nd time within 5 months.

Commanding Officer, Commander Matthew Warren, said he was looking forward to working with the Georgian Coastguard once more, towards their “common aim of peace and stability within the Black Sea.”

The previous time the HMS Echo visited the Black Sea was in December 2018, to reinforce UK and NATO’s support for Ukraine, which was suffering following the incident in which Ukrainian warships were seized by the Russian coastguard in November south of the Kerch Strait.

“The Swedish Armed Forces and the Navy, together with the National Defence Radio Establishment, will receive a qualified and modern signals intelligence vessel that will increase their capacities,” Swedish Defence Materiel Administration (FMV) Director General Göran Mårtensson said.

“Compared with the HMS Orion, which was launched in 1984, its replacement has a great technical edge and also an improved working and living environment on board, increased operational reliability and improved electromagnetic compatibility properties, that is how the equipment in the vessel affects other surrounding electronic equipment and how sensitive the equipment is for external electronic interference”, FMV’s project manager Peter Andersson said.

Separately, NATO member countries attempt to use civilians for intelligence work. A Norwegian national – Frode Berg, 62, was arrested in 2017 by the Russian Security Service – the FSB.

He was accused of involvement in an elaborate spying operation, dating back to 2015, to obtain information about Russia’s nuclear submarine fleet in the far north.

In spring 2018, Berg himself added a new layer of intrigue when he admitted, through his lawyer, that he had actually been working with Norwegian military intelligence. He was unaware of the scope and purpose of the operation, he was simply a courier.

According to scarce details, he was mailing envelopes with cash and spying instructions to a woman called Natalia in Moscow, in return for information about Russia’s nuclear submarines in the Kola Peninsula.

“Norway’s intelligence service is a world leader when it comes to technical intelligence, but we are relatively inexperienced in human intelligence,” Heier said. “[Berg’s] case looks very amateurish to me. It looks like we were caught while trying something outside our core competence.”

Norway further hosts a US radar, located on the tiny Arctic island of Vardo. The shrinking island has one successful business – its electric company, which supplies a US Globus 3 radar overseeing the Kola Peninsula, a Russian territory filled with high-security naval bases and restricted military zones.

“This place is very, very important for America and for the Western world so that they can keep an eye on what the Russians are doing,” said Lasse Haughom, a former mayor of Vardo and a veteran of Norway’s military intelligence service.

“Russia wants to look into our secrets, and the United States and Norway want to look into their business,” Mr. Haughom added. “That is the way the game is played.”

The Russian ambassador in Oslo, Norway’s capital, warned Norway that it should “not be naïve” about Russia’s readiness to respond.

“Norway has to understand that after becoming an outpost of NATO, it will have to face head-on Russia and Russian military might,” the ambassador, Teimuraz Ramishvili, told Norway’s state broadcaster, NRK. “Therefore, there will be no peaceful Arctic anymore.”

The US is actively partaking in combating alleged Russian interference by advanced cyber reconnaissance.

Since, the US fears to become a victim to an attack similar to the 2007 one in Estonia, which was blamed on Russia.

In September 2018, it was announced that the UK would invest £250m to establish a joint cyber task force between the Ministry of Defence and GCHQ.

Developing cyber security skills strategy should be the government’s first priority, the committee said. “It is a pressing matter of national security that it does so,” it added.

Despite those massive investments, accusations that Russian hackers and security service personnel still allegedly continue to successfully carry out cyber-attacks is puzzling.

“In recent years, NATO has stepped up its efforts in Intelligence by creating an Assistant Secretary General position and a NATO Intelligence Division to better understand the security threats. NATO continues to optimise NATO intelligence to facilitate timely and relevant support to Allied decision-making and operations, including through improved warning and intelligence sharing, particularly on terrorism, hybrid, and cyber.”

The NATO Communications and Information Agency, which is responsible for the Joint Intelligence, Surveillance and Reconnaissance (JISR), which is the synchronization and integration of Operations and Intelligence capabilities and activities, geared to providing timely information to support decisions in NATO member and partner states. It has two offices in Norway, one in Poland and none in the Baltic states.

Farting and wasting resources to show yourself powerful, is not preparation for war and in the case of the morons of usa, is more like suicide for themselves and destruction of europe, rather than anything else. They have already destroy their economy and europes, making europe an easy push over victim for china and russia to take it over.

This came out six days ago: ‘KICZ A0015/19-SECURITY..UNITED STATES OF AMERICA ADVISORY FOR OVERWATER AIRSPACE ABOVE THE PERSIAN GULF AND GULF OF OMAN THOSE PERSONS DESCRIBED IN PARAGRAPHA BELOW SHOULD EXERCISE CAUTION WHEN OPERATING IN OVER WATER AIRSPACE ABOVE THE PERSIAN GULF AND THE GULF OF OMAN DUE TO HEIGHTENED MILITARY ACTIVITIES AND INCREASED POLITICAL TENSIONS IN THE REGION, WHICH PRESENT AN INCREASING IN ADVERTENT RISK TO U.S.CIVIL AVIATION OPERATIONS DUE TO THE POTENTIAL FOR MISCALCULATION OR MIS-IDENTIFICATION. ADDITIONALLY, AIRCRAFT OPERATING IN THE ABOVE-NAMED AREA MAY ENCOUNTER INADVERTENT GPS INTERFERENCE AND OTHER COMMUNICATIONS JAMMING, WHICH COULD OCCUR WITH LITTLE TO NO WARNING.’ https://www.faa.gov/air_traffic/publications/us_restrictions/media/KICZ_A0015-19_Advisory_NOTAM_Persian_Gulf.pdf

And yes that’s also no preparation for war, but includes with ‘AIRCRAFT OPERATING IN THE ABOVE-NAMED AREA MAY ENCOUNTER INADVERTENT GPS INTERFERENCE AND OTHER COMMUNICATIONS JAMMING, WHICH COULD OCCUR WITH LITTLE TO NO WARNING.’ a strong possibility for it, regardless of how shitt headed such a move would be…

Lavrov tell you that .

Putin is a nut job , and threatening nukes and invading neighbours has caused these problems , time has come for Russians to be able to speak for themselves .

The only ones invading are the americunts and co, i see they want to prolong an old western tradition, getting their butt kicked by Russia every 100 years.

Who made the US hate the Russians? After all Russia was the biggest helper for American to be born. Our own president John Quincy Adams was the American ambassador to Russia since he was like 15 years old and he later became president. Americans thought the world of Russians until the English infiltrated American media in 1914 and began to warp Americans into being racist against Germans and hating Russians. The UK-empire taught us to hate Russians and Germans.