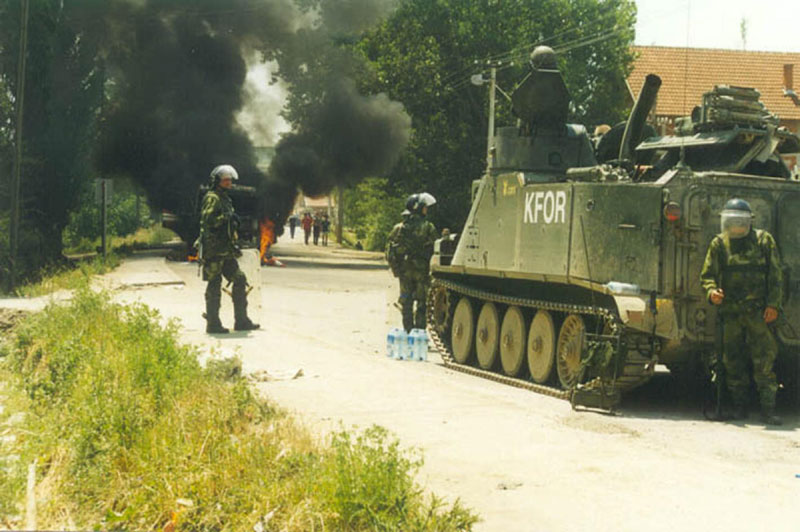 The following text is the third in a series of articles presenting an analysis and evaluation of NATO enlargement in the Balkans, the interests that are driving this policy and the implications this has for Russia. The author is a criminal justice professional and specialist with over a decade of experience within the field of law enforcement, public protection, risk assessment and security analysis and strategy.

The NATO military alliance has sought the consolidation of its command/control structure within the South Eastern Europe sector of the Joint Force Command (JFC) area through the extension of membership status to the former Yugoslav republics of the Western Balkans region. NATO Eastward expansion has followed a series of repeated military interventions in this region that ensued upon the instigation of the Wars of Yugoslav Secession, or Third Balkan War, during the decade of the 1990s. The primary objective of the NATO alliance within this operational theatre has been the suppression, containment and degradation of the designated opponent in accordance with the historical principles of long-term duration, identified by Dr Dragan Petrovic of the Institute for International Relations in Belgrade as the ‘Serbian factor’. Dr Petrovic has explained that from the perspective of the higher echelons of policy planning within the NATO military alliance, the ‘Serbian factor’ is considered to be an intractable ‘pro-Russian element’ which, over the course of longer-term duration, will naturally gravitate toward the Russian sphere of influence. [1] The emergence of a sovereign Serbian national state from the decomposition of the Socialist Federal Republic of Yugoslavia (SFRY) therefore, was considered to be an unacceptable development within South Eastern Europe upon the culmination of the Cold War. NATO intervention in the former Yugoslavia, or Western Balkans then, has been motivated primarily by the geopolitical concerns emanating from immediate post-Cold War priorities, consisting of four principal considerations:

These concerns and considerations have been articulated by George Friedman, the former Chairman of the private analytical agency Strategic Forecasting Inc., commonly referred to as Stratfor, which reportedly operates in close collaboration with the US State Department, leading US intelligence agencies, the military and private corporate sector. [2] Friedman has explained the rationale of this approach in an interview with Russia based news publication Kommersant in December 2014. Geopolitical considerations are, according to Friedman, the primary factor in influencing the contours of US foreign policy and by extension the operations of NATO, and geostrategic objectives are primarily motivated towards the prevention of the emergence of potential regional hegemonic powers. Friedman revealed that from the perspective of the US, such regional hegemonic actors have been identified to include Serbia, Iraq, and Iran. In order to prevent these entities from assuming a regional leadership role therefore, Friedman noted that the US has sought to destabilise these countries through instigation and perpetuation of chaos. The redrawing of national borders has been integral to this process, Friedman revealed, and the former Yugoslavia was the first such test case in which this approach was employed as a post-Cold War strategic practise and subsequent methodological model. [3] NATO intervention or indirect involvement in conflict zones from Syria and Libya, to Georgia and Ukraine, have employed such strategic approaches of perpetuating localised or regional hostilities on the basis of ethno-national and religious based sectarian tendencies. Localised and regional conflict provides the grounds for NATO intervention and by extension, an elevation of its function, as well as its significance and influence in the area of concern.

In the instance of the Western Balkans, it is critical for NATO to consolidate the region as an intervention platform from where power projection into the strategic depths of Eurasia, the Middle East, and Northern Africa, as well as Western Europe presents as permanent operational possibility. This perception has been confirmed by the revelations of Willy Wimmer, a former member of the German Parliament (Bundestag) and Vice President of the Parliamentary Assembly of the OSCE (Organization for Security and Cooperation in Europe). In discussion concerning his attendance at a US State Department organised conference in Bratislava, Slovakia in 2000, Wimmer raised his concerns regarding the conclusions drawn by US political and military policy planners in a letter to the then German Chancellor Gerhard Schroeder. According to Wimmer, it was revealed that NATO intervention in the Western Balkans had been conducted in order to rectify a strategic mistake on the part of the Eisenhower administration in its failure to station a large contingent of US forces in this location at the end of the Second World War. Additionally, a principal objective of NATO intervention had been and continued to be the long-term isolation and containment of Serbia from the remainder of Europe, including permanent exclusion from the European integration process. [4] Wimmer noted that it was made clear that intervention in the former Yugoslavia was an integral component of the strategy of the military alliance to encircle and isolate the Russian Federation. Wimmer stressed that the main conclusion to emerge from the conference he reported on to Schroeder, was the US perception of NATO as a military alliance of an eventual North Atlantic integrated bloc, which in real terms would constitute a contemporary version of the Roman Empire. The breadth of this North Atlantic supranational entity was envisaged to eventually extend from the Pacific Coast of North America across the North Atlantic into the depth of Europe, where a finalised boundary would be established between the Baltic and Black Seas. [5] Willy Wimmer described the planned contours of what would eventually become a North Atlantic supranational entity akin to a super state through the integration of the North American Free Trade Area (NAFTA) and the European Union (EU). [6] The NATO alliance is the military and potentially political expression of this process, the Trans Atlantic Trade and Investment Partnership (TTIP) is envisaged to constitute its economic component. [7 ] In the Western Balkans, Bosnia-Herzegovina and Macedonia, centred around Serbia, remain within a contested area that has not been fully integrated into this burgeoning system due to the incomplete process of reconfiguration. The terrorist attacks in the towns of Zvornik in Republika Srpska (entity of Bosnia-Herzegovina) and Kumanovo in Macedonia in April/May 2015, are indicative of further prospective instability within the region as its future and eventual orientation is determined.