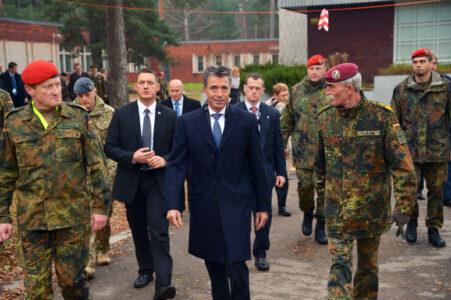 The exercises promote an unnecessary escalation of tensions amidst a complicated context of Russian-NATO relations.

Once again, NATO is conducting a rather dangerous maneuvers in Eastern Europe with the aim of provoking Russia. Latvia is the new military drill arena for the Western Alliance, with the country receiving troops from across the Atlantic for a military event called the Winter Shield. This event is annual and provides the opportunity for forces from Latvia and the rest of NATO to act together, training war tactics for possible combat scenarios. However, as has become tradition in NATO, each year the exercises become more aggressive, bringing together a large number of agents, equipment and resources for the sole purpose of showing strength against Russia.

The Latvian armed forces issued a statement earlier this week in which it is possible to read: “From 21 November to 4 December, Latvia will host international military exercise ‘Winter Shield’ to test and upgrade the combat capabilities of Latvian and allied Armed forces units along with their integration and interoperability within Baltic region’s collective defense system”. Since Sunday, the forces of Latvia and other nations of the Alliance have been conducting maneuvers in the country, with a huge presence of agents and equipment from different countries.

Despite the presence of troops from the most diverse armies, the units that most allocated people to conduct drills were the Land Force Mechanized Infantry Brigade, National Guard, Special Operations Command, NATO Enhanced Forward Presence Battle Group, Baltic Battalion, and the US Special Operations Command Europe. As was to be expected, the Baltic countries sent in the greatest number of troops. It is also notorious the presence of foreign agents in the other Baltic nations during the exercises, with no restriction to the Latvian territory.

The Winter Shield is an annual military event, which is why its occurrence in 2021 was expected by all experts in geopolitics and military matters. However, this year the strength of the event seems to stand out even more. It is known that NATO has been concerned with making its operations in Eastern Europe – especially in the Baltics – more and more severe, significantly increasing the level of aggressiveness in its conduct in the region. With that, there is an effort for the exercises to show progressively more strength. While on previous occasions the maneuvers in Latvia did not receive much attention due to the large number of NATO simultaneous tests in the region, this year the event tends to be emphasized by the experts, both due to its long duration (two weeks) and for its intensity.

Apparently, one of the biggest focuses of the Winter Shield 2021 will be strengthening tactical air-to-land integration operations. In the announcement from the Latvian armed forces it is written: “A significant aspect of the exercise is also air to land integration with various air assets, including ‘AH-64 Apache’ Attack Helicopters from the 101st Combat Aviation Brigade falling under US Army Europe (USAREUR) and Operation ‘Atlantic Resolve’”. The tactical value of this type of operation grows every day, in a military context with great emphasis on the role played by air war vehicles. In the same sense, these exercises complement the air-sea integration, which has been prominent in NATO’s Black Sea maneuvers. It is notorious that the Western alliance is creating a combat strategy focused on land operations in the Baltics and naval operations on the Ukrainian coast, with air warfare as the tactical integration point. The objective is to militarily occupy Eastern Europe in all possible ways, intensifying the encircling strategy against Russia.

Indeed, the main problem with these exercises is that they promote an unnecessary escalation of tensions amidst a complicated context of Russian-NATO relations. Recently, bilateral diplomacy between Moscow and the alliance was broken, after Russian diplomats were expelled from NATO headquarters due to unsubstantiated accusations of “espionage”. The organization has also been conducting increasingly dangerous operations in the Black Sea and progressively encouraging the extremist anti-Russian stance of the Kiev government – which is currently largely shared by the Baltic states.

There is also the issue of Central Asia, where NATO is openly considering allocating dozens of military bases in the coming months, under the excuse of “fighting terrorism”, further expanding its anti-Russia encircling strategy. So, the current moment is problematic and tense. Carrying out events with large military exercises in the current situation is admitting a high possibility of frictions and conflicts.

Unfortunately, for NATO, the possibility of conflict no longer appears to be a problem, but a goal. All recent episodes of aggressive military conduct and diplomatic disrespect have occurred on the part of NATO, which is increasingly violating the Russia-NATO Founding Act (a 1997 bilateral agreement which establish terms for peace between Moscow and NATO). In fact, the organization appears to be intensely seeking to create a conflict situation, which should be reason enough for international sanctions to be imposed as soon as possible on all member countries of the alliance that participate in such provocative maneuvers.

After the vaccinations the Nato sheeple can be managed by remote control via 5G. 100 mio European zombies rolling in over Russia’s borders, and even if Russia shoots all their heads off they will continue marching on Moscow and nobody can do a shet about it. Its over. We won!