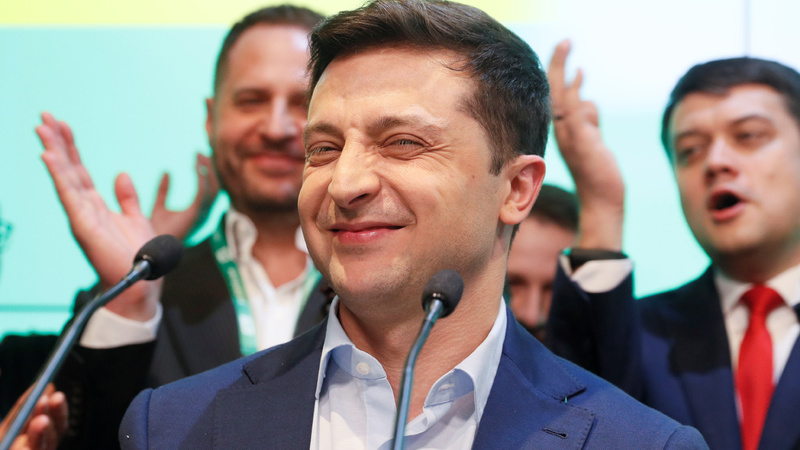 The current state of the Ukrainian state has been the laughingstock of the entire Europe and the tragedy for people living in this territory. Recently, the Kiev government has released a new batch of nationalistic fairy tales.

During an August 24 speech, President Volodymyr Zelensky gat a chance shine a light into the ‘historic truth’ and the role of the modern Ukraine in the world history.

“Thanks to you, we are celebrating the 28th anniversary of Independence Day today.

Although it is not quite correct to say that Ukraine is 28. After all, we have done a lot by the 91st year. Baptism of Kyivan Rus’ took place, Ivan Fedorov published the Apostle in Lviv, the Kyiv-Mohyla Academy was founded, the Cossacks led by Bohdan Khmelnytsky and Ivan Sirko conquered the Dunkirk fortress, the Constitution of Pylyp Orlyk was born. Ukraine was one of the founders of the UN, and Serhiy Koroliov made a significant contribution to the conquest of space by humanity. These are just a few of the highlights of the vibrant history of our centuries-old and at the same time young country,” Zelensky stated.

He further claimed that Ukraine’s ‘struggle for indepence’ was active “in times of the Soviet Union”.

“Because, as Levko Lukyanenko said, the desire for independence is embedded in our [Ukrainian] genetic code,” the Ukrainian President noted.

Zelensky’s speech was surprising. It is interesting to note how the nationalistic propaganda hysteria employs mutually exclusive claims.

Another historical anecdote is the participations of ‘Ukrainians’ in the seizure of the Dunkirk fortress (XVII century). This fairy tale has never been confirmed by the historical science. Nonetheless, the official Ukrainian propaganda continues to employs this myth as a part of the campaign to create and promote the mythical history of ‘Great Ancient Ukraine’. Furthermore, Zelensky used in his speech own invention by claiming that Bohdan Khmelnytsky (Hetman of the Zaporozhian Host) participated in this mysterious event.

‘The Constitution of Pylyp Orlyk’ (1710) is just another myth created by the Ukrainian propaganda to claim that the modern Ukraine had some ‘democratic roots’ and a kind of state before 1991. However, this ‘constitution’ was not a really ‘constitutional document’. It was a deal between then-Hetman of pro-Mazepa forces Orlik and his colonels (including forces led by them). The original name of the document in clearly states about this.

Another interesting fact is the context of the document creation. After the Battle of Poltava, when Charles XII of Sweden’s army and forces of Hetman Ivan Mazepa (that betrayed the Russian Empire) were defeated by Peter I of Russia, Pylyp Orlyk remained with Mazepa. Orlyk and Mazepa fled towards Bessarabia in the Ottoman Empire. This is where the so-called ‘consitution’ was written.

The nonsense of this kind is Zelenky’s attempt to link great Soviet rocket engineer and spacecraft designer Sergei Korolev with the modern Ukraine. Claims in these fields are based on the fact that Korolev was born in Zhytomyr, the capital of Volhynian Governorate of the Russian Empire. This territory is now located in Ukraine thanks to the policies and decisions of the Soviet leadership. The scientific work of Korolev has never been linked with Ukrainian territory. Korolev was not Ukrainian and did not consider himself being Ukrainian.

The most insane claim is the quotation of some Ukrainian nationalist Levko Lukyanenko that claimed that “the desire for independence is embedded in our [Ukrainian] genetic code”. Zelensky appeals to questions of the genetic. So, it would be interesting to know what kind of ‘genetic links’ to the Ukrainian nation does the ethnically Jewish president have?

SF, i do not doubt the claims you make here, but for us mostly non Russian or Ukraine readers, please take your time to go more into detail. All the names etc and historic facts you cite say not much too us. So maybe you could in future make a more extensive article that explains this further, if possible with links to further information.

Thanks in advance, greatly appricieated!

If he starts to refute all the retarded nonsense that is going on in Ukrajine on daily bases – he would do nothing else, it would be full time job..

Seem like many Ukrainians are pretty dumb, and these new facists and nationalists are even dumber.

Which? The kind they “beak” during their “massive offensives” in the Donbass?

We Swedes would prefer to write the name of our great (and stupid) warrior king as Karl or perhaps Carolus, not Charles.

Perhaps not a big deal, but you will feel our Viking anger if you should write about our ancient king Valdemar as Vladimir…

Now all they need to do is just to repeat them 24/7, make a museum in every corner and make it illegal to question these claims…

Success! “Historical facts” are born! Now they can blackmail others to pay them “reparations”.

This is Putin propaganda. I Will never visit this site again.

Come on – the Kievan Rus where always an event which mande clear that Russia and Ukraine hat common historic viking routes. To bent this into an separatist soley Ukrainian event is ridiculous…

Is that a promise?

Thank duck for that.

I knew the President, was meant to be a comedian, but, how I failed to find any humour in his former role; well till I read his words, above.

Does anybody remember Yats, and his version of the history of the 20th Century, with Disney as his adviser?

Fairy Tales, back in the olden days, were tales of caution and very dark and disturbing. Prior, to before them finding a place in the children’s market. I guess the Comedian, mentored by Soros (isn’t he working hard on kick starting trouble, with his ‘Open Society’ over in Albania?) and Kolomoisky, wishes to return to the times when Fairy Tales, were seriously dark and disturbing. I wonder how Disney, would portray the Kiev Nazis and the various Ukraine massacres, from 2014 to present?

AM: There are very strong parallels between the Declaration of Independence of the former 13 colonies in America and the declaration of the 2 Donbass republics regarding their independence.

Thanks Ralph. Interesting, how they misinterpret international law, to suit their own needs, whilst denying the same rights to others.

Already seen, especially in the former YU, an attempt to make a new identity on historical forgeries.

How can he be wrong? Ukraine is the greatest reenactment country in Europe, after Germany. Everything from Neanderthals to Smurfs are re-enacted as celebrated ‘eras’ in EUkrainian history. Their ‘irishmen of Voivodna’ are simply ‘fun’ and the K-lager stabwache are ‘to die for’.

“……..Zelensky appeals to questions of the genetic. So, it would be interesting to know what kind of ‘genetic links’ to the Ukrainian nation does the ethnically Jewish president have?…….”

There is no reason that a Jewish President should be singled out for dual loyalty. Why not Polish Ukrainians, or Crimean Tatars? Ukrainians have been fighting for independence at least since WWI. Russian propagandists love to point out Stepan Bandera as a Nazi yet he was fighting for Ukrainian independence – as did other Ukrainians coming on the heels of the attempted genocide of ethnic Ukrainians by Stalin during the Holodomor in 1933.

Ukrainians have sought independence just like the Lithuanians, Latvians and Estonians when 2,000,000 joined hands in 1989 to protest their loss of independence in 1940 to an ambitious Stalin. The independence movement came to a head after the collapse of the Soviet Union when 15 countries – including Ukraine – declared independence. Even a majority of Crimeans voted for Ukrainian independence in 1991.

The election of a Jewish President by a margin of 75% to 25% completely disproved the myth promoted by pro-Russian propagandists that Ukraine is run by white nationalist neo-Nazis. In addition, the free and fair election was an embarrassment to the Russian government in lieu of the protests in Moscow to allow opposition candidates on the ballot for the coming Moscow elections. As the Russian government becomes more authoritarian under Putin, it’s easy to understand the resentment in the alternate pro-Russian media.

Where were all these “independent states” pre WW1?

The answer is fairly simple. They were no doubt a part of the Russian Empire, but that is an additional reason for their independence. The Russian empire under the Tsar collapsed after WWI which led to the Bolshevik Revolution. Latvia, Estonia and Lithuania gained their independence only to lose it once again to the USSR in 1940.

So they got independence, and immediately installed pro Nazi governments.

Why should any nation have independence, when it uses it to carry out abhorrent racial and ethnic cleansing?

These nations today, deny citizenship to those citizens, who do not support the right of the Baltic states to celebrate SS divisions, and deny the Holocaust.

Will Russian-bots ever stop with the neo-nazi comments? The Baltics and Ukraine do have their share of far right white nationalist – as does Russia. However Ukraine just elected a Jewish President!

Any Eastern European country that does not tow the Russian line automatically must be run by neo-nazis. What BS! Stop with it please.

Latvia, Estonia and Ukraine are Nazi states, they have parades commemorating their Nazi past today. Will p ricks like yourself stop calling people Russian bots, just because they don’t listen to your Nazi propaganda?

Just as many nazis in Moscow and they have parades as well.

How are things going, over in Ukraine?

A Miracle: The OSCE in Donbass Suddenly Regained Its Vision… https://www.stalkerzone.org/a-miracle-the-osce-in-donbass-suddenly-regained-its-vision/

The smm is still useless.