Now, the National Security and Defense Council of Ukraine claims that religious processions are “an effective tool of the Russian hybrid war” and threatened organizers of forums for peace with a criminal liability for such actions.

In a statement of the Secretary of the National Security and Defense Council of Ukraine Oleksiy Danilov said on September 20 that this is due to the increased activity of some “religious structures” ahead of the local elections.

“One of the effective tools of the Russian hybrid war against Ukraine is the use of religious structures in the format of holding ‘conferences’, ’round tables’, ‘international forums’, ‘processions of the cross’, Danilov said. “The purpose of such events is to promote the ideas of the so-called ‘Russian world’, to justify Russian aggression against Ukraine, to promote anti-Ukrainian theses of Russian propaganda.”

According to him, it was “such a long-term activity of the special services of the Russian Federation” that led to the “occupation” of Crimea and parts of Donetsk and Lugansk regions.

On August 17 the Holy Synod of the canonical Ukrainian Orthodox Church (Moscow Patriarchate) decided to hold the peacemaking forum “People of the World”. The organizing committee of the forum, which will be held on September 21 in the Svyatogorsk Lavra, includes famous Ukrainians who support the peacemaking initiatives of the Church. The purpose of the forum is to develop an action program to put an end to the ongoing conflict and restore peaceful life in eastern Ukraine.

However, such actions are seem by the current political regime in Kiev as a threat to its power. Instead, the Ukrainian authorities and security services prefer to promote the policy of ethnic and religious hatred as well as sabotage the real implementation of any peace initiatives (not only the Minsk agreements, but also local political actions aimed at the de-escalation of tensions). To justify this approach, the Kiev government continues accusing any force seeking to support the peaceful solution of the conflict in eastern Ukraine of being ‘Russian agents’ and participants in the ‘hybrid war against Ukraine’.

I love Donbass, support to its people and death to Ukrop nazis.
The Houthis of Eastern Europe ?? 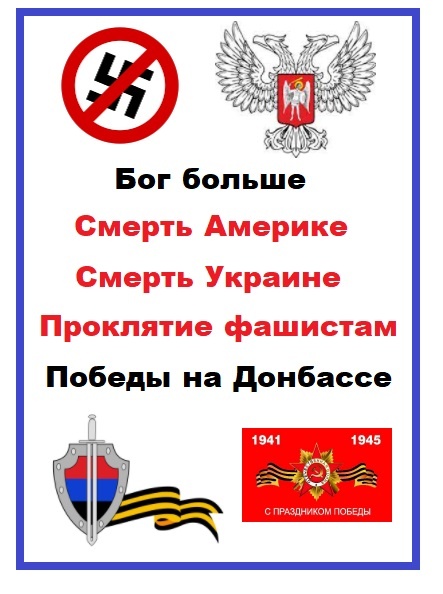