Public opinion has its eyes riveted on USMCA, which is tagged as NAFTA 2.0. It is important at this stage to focus on the murky history of NAFTA 1.0  as well as the transition to NAFTA 2.0.

Was NAFTA 1.0 a legal agreement?

There is evidence that one of the signatories of NAFTA 1.0 had  links to organized crime. The Mexican President Carlos Salinas de Gortiari had pervasive family ties to the Mexican Drug Cartel. In turn, the President of the United States had a long standing personal relationship to the Salinas family.

While this was known and documented prior to the signing of the agreement in 1992, the information was withheld. It was not an object of legislative debate nor was it revealed to the broader public until AFTER the official launching of NAFTA on January 1st 1994.

There was a coverup. Both the George H. W. Bush Senior administration as well as the incoming Clinton administration were fully aware of the links of the Salinas presidency to organized crime. This information was deliberately withheld. Public opinion in the US and Canada was never informed so as not to jeopardize the signing of NAFTA 1.0:

“Other former officials say they were pressured to keep mum because Washington was obsessed with approving NAFTA”.“The intelligence on corruption, especially by drug traffickers, has always been there,” said Phil Jordan, who headed DEA’s Dallas office from 1984 to 1994. But “we were under instructions not to say anything negative about Mexico. It was a no-no since NAFTA was a hot political football.” (Dallas Morning News, 26 February 1997) In a bitter irony, it was only after this historical event, that Carlos Salinas’ family links to the drug trade through his brother Raul Salinas de Gortiari and his father were revealed.

In other words, at the time the NAFTA Agreement was signed, both Bush Senior and Mulroney were aware that one of the signatories of NAFTA, namely president Salinas de Gortiari  had links to the Mexican Drug Cartel.

Moreover, the personal relationship between the Bush and Salinas families was a matter of public record. Former President George Bush — when he worked in the oil business in Texas in the 1970s– had developed close personal ties with Carlos Salinas and his father, Raul Salinas Lozano who was a leading figure in narcotics dealings.

According to Andres Openheimer writing in the Miami Herald (February 17 1997):

“told [US] authorities [in testimony] that Mr. Salinas Lozano was a leading figure in narcotics dealings that also involved his son, Raul Salinas deGortiari, his son-in-law, Jose Francisco Ruiz Massieu, the No. 2 official in the governing Institutional Revolutionary Party, or PRI, and other leading politicians, according to the documents. Mr. Ruiz Massieu was assassinated in 1994.” (Dallas Morning News, 26 February 1997).

According to former DEA Michael Levine, the Mexican Drug Cartel was a “family affair”. Both Carlos and Raul were prominent members of the Cartel. And this was known to then US Attorney General Edward Meese in 1987 one year prior to Carlos Salinas’ inauguration as the country’s president. It is worth recalling that in the 1960s, the Minister of Commerce in charge of trade negotiations was held by Raul Salinas Lozano.

When Carlos Salinas was inaugurated as President, the entire Mexican State apparatus become criminalised with key government positions occupied by members of the Cartel.

And it is precisely during this period that the Salinas government launched a sweeping privatisation program under advice from the IMF.

The privatisation program became a multibillion dollar money laundering operation. Narco-dollars were channelled towards the acquisition of State property and public utilities.

Richard Barnet of the Institute for Policy Studies, testified to the US Congress (April 14, 1994) that

“billions of dollars in state assets have gone to supporters and cronies” (Dallas Morning News, 11 August 1994).

These included the sale of Telefonos de Mexico, valued at $ 3.9 billion and purchased by a Salinas crony for $ 400 million.(Ibid).

Raul Salinas was behind the privatisation programme. He was known as ”Mr. 10 Percent” “for the slice of bid money he allegedly demanded in exchange for helping acquaintances acquire companies, concessions and contracts [under the IMF sponsored privatisation program” (The News, InfoLatina, .Mexico, October 10, 1997).

In 1995 in the wake of the scandal and the arrest of his brother Raul for murder, Carlos Salinas left Mexico to take up residence in Dublin. His alleged links to the Drug Cartel did not prevent him from being appointed to the Board of the Dow Jones Company on Wall Street, a position which he held until 1997:

Salinas, who left Mexico in March 1995 after his brother, Raul, was charged with masterminding the murder of a political opponent, has served on the company’s board for two years. He was questioned last year in Dublin by a Mexican prosecutor investigating the murder in March 1994 of Luis Donaldo Colosio, who wanted to succeed Salinas as president. A Dow Jones spokesman last week denied that Salinas had been forced out of an election for the new board, which will take place at the company’s annual meeting on April 16… Salinas, who negotiated Mexico’s entry into the free trade agreement with the United States and Canada, was appointed to the board because of his international experience. He was unavailable for comment at his Dublin home last week.” (Sunday Times, London, 30 March 1997).

Washington had consistently denied Carlos Salinas’ involvement. “It was his brother Raul”, Carlos Salinas “did not know”, the American media continued to uphold Salinas as a model statesman, architect of free trade in the Americas and a friend of the Bush family.

In October 1998, The Swiss government confirmed that the brother of the former Mexican president had deposited some 100 million dollars in drug money in Swiss banks:

“They [Swiss authorities] are confiscating the money, which they believe was part of a much larger amount paid to Raul Salinas for helping Mexican and Colombian drugs cartels during his brother’s six-year term ending in 1994. Mr Salinas’ lawyers have maintained he was legally heading an investment fund for Mexican businessmen but the Swiss federal prosecutor, Carla del Ponte, described Salinas’ business dealings as unsound, incomprehensible and contrary to customary business usage. (BBC Report)“After [Carlos] Salinas left office in 1994, the Salinas family fell from grace in a swirl of drug-related corruption and crime scandals. Raúl was jailed and convicted on charges of money laundering and of masterminding the assassination of his brother-in-law; after spending 10 years in jail, Raúl was acquitted of both crimes.  …With the scandal unraveling, Jeb’s friendship with Raúl did not go unnoticed. Jeb has never denied his friendship with Raúl, who [now] keeps a low profile in Mexico.Kristy Campbell, spokesperson for Bush, did not respond to a request for comment. The Salinas family’s demise caught the Bushes by surprise. “I have been very disappointed by the allegations about him and his family. I never had the slightest hint of information that President Salinas was anything but totally honest,” Bush senior  told me in the 1997 interview. (Dolia Estevez, Jeb Bush’s Mexican Connections, Forbes, April 7, 2015, emphasis added)

“The Salinas family’s demise caught the Bushes by surprise”? (Forbes, April 2015) The Bushes knew who they were all along.

Former DEA official Michael Levine confirmed that Carlos Salinas’ role in the Mexican drug cartel was known to US officials. US President George H. W. Bush was  regularly briefed by officials from the Department of Justice, the CIA and the DEA.

US authorities waited until after Carlos Salinas finished his presidential term to arrest Mexican drug lord Juan Garcia Abrego, who was a close collaborator of the president’s brother Raul. In turn, Raul Salinas was an “intimo amigo” of Jeb Bush :

Juan Garcia Abrego, a fugitive on the FBI’s most-wanted list, was flown to Houston late Monday, following his arrest by Mexican police …  Garcia Abrego, the reputed head of Mexico’s second most powerful drug cartel, had eluded authorities on both sides of the border for years. His arrest is an enormous victory for the U.S. and Mexican governments. CNN, January 16, 2015

But there is more than meets the eye: while the Bushes and the Salinas had longstanding ties, Wall Street was also involved in the laundering of drug money:

A U.S. official said the Justice Department has made significant advances in its money-laundering investigation against Raul Salinas de Gortari and has identified several people who can testify that the former first brother received protection money from a major narcotics cartel.

If the U.S. were to indict Mr. Salinas, it could have implications for a Justice Department investigation into possible money laundering by Citibank, where Mr. Salinas had some of his accounts. Citibank, a unit of Citicorp , has denied wrongdoing. (WSJ, April 23, 2015)

The involvement of Citbank in the money laundering operation is documented by a Senate Committee on Governmental Affairs Report (US General Accounting Office  “Private Banking: Raul Salinas, Citibank, and Alleged Money Laundering” Washington, 1998).
The 1992 “Free Trade” Agreement (NAFTA) was signed by a head of State with links to organized crime.

Does that make it an illegal agreement?

The legitimacy of NAFTA has so far not been the object of a legal procedure or judicial inquiry. Nor was it an object for debate in the US Congress and Canada’s parliament.

Déjà Vu. The Legality of NAFTA 2.0 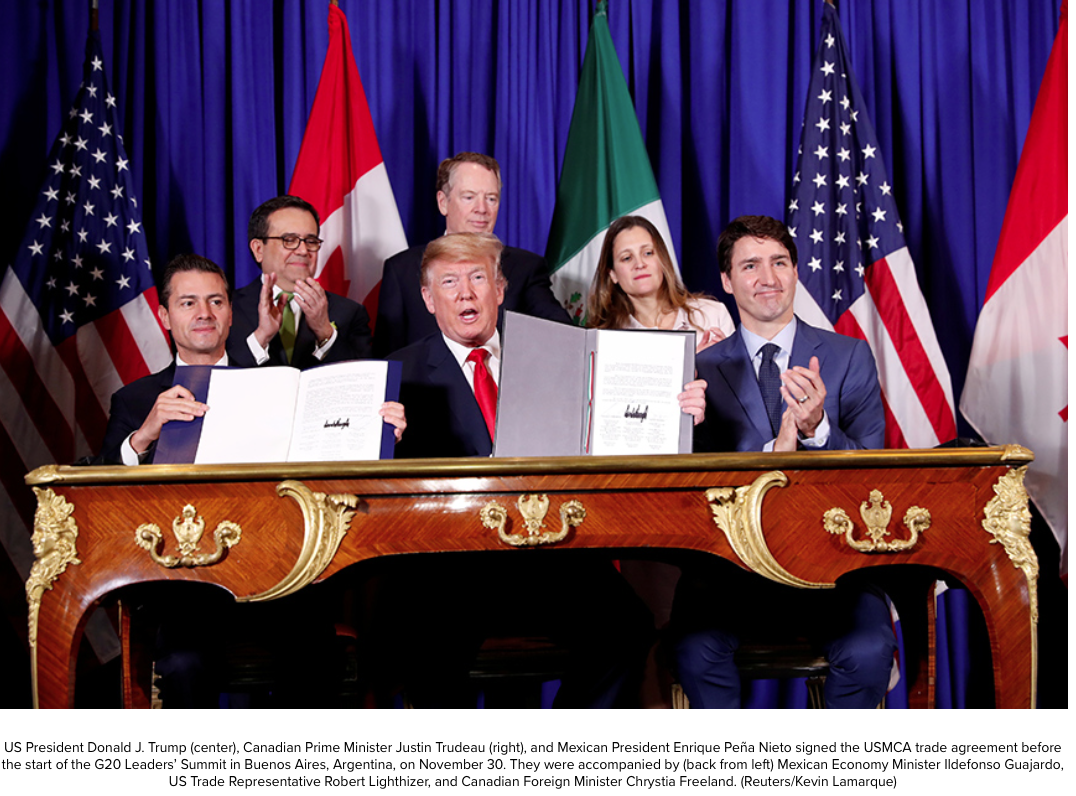 Both NAFTA 1.0 and NAFTA 2.0 (USMCA) were signed under questionable circumstances.

The Mexican president Enrique Peña Nieto (signatory of NAFTA 2.0) also had links to Mexico’s Drug Cartel. But that information which was known to US  officials and the Western media was withheld until after the signing of the November 30, 2018 USMCA agreement.

1. Both NAFTA 1.0 and NAFTA 2.0 were signed by a head of state with links to organized crime.  Both Salinas de Gortiari and Peña Nieto had extensive links to the Mexican Drug Cartel.

2. In a bitter irony, both Enrique Peña Nieto and Salinas de Gortiari had been rewarded 100 million dollars.

3. In both cases, the media failed to address the issue prior to the signing of these two historical agreements. They “spilled the beans” (immediately) following the end of  Salinas de Gortiari and Peña Nieto’s terms of office (respectively) as Mexico’s head of state.

The USMCA (NAFTA 2.0) agreement was signed in Buenos Aires on November 30th 2018, on the sidelines of the G-20 meetings. It was Enrique Peña Nieto’s last day in office.

The NAFTA 2.0 agreement was signed in haste ONE DAY PRIOR to President Lopez Obrador’s inauguration on December 1, 2018.

The timing of this agreement was intended to exclude President Andrés Manuel Lopez Obrador from the process of negotiation and ratification of USMCA.

Moreover, it was understood that the new president (who had no links to organized crime) would not be allowed to question the legitimacy of the agreement signed by his predecessor Enrique Peña Nieto, despite his links to the Mexican Drug Cartel. 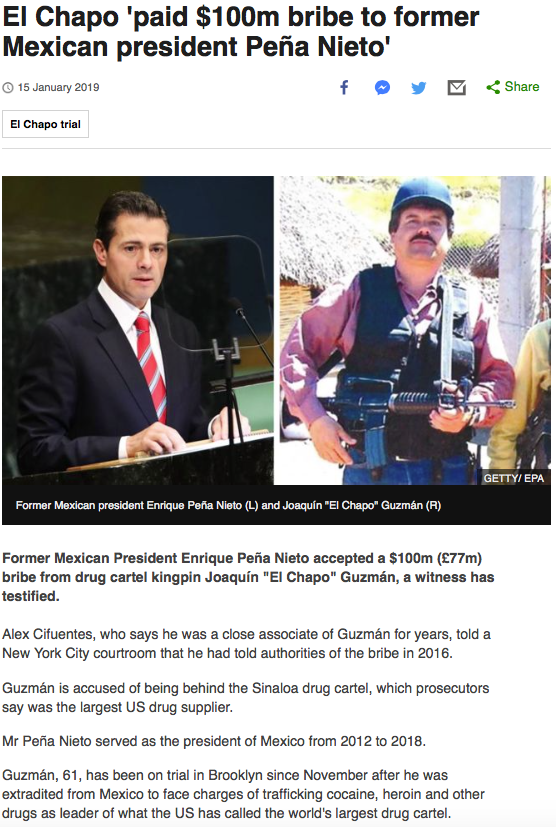 I believe that Enrique Peña Nieto is [2014] trying to make an old-style pact with drug traffickers. The issue is that he won’t be able to because organized crime is so pulverized and there are so many loose criminal cells that don’t take orders from anybody. What I can say is that the Sinaloa cartel is achieving under this administration [Peña Nieto] what it didn’t achieve in its best years under [former presidents] Fox and Calderon.What do you hope to achieve with your investigations? What should Mexico do, put former presidents in prison?What I have learned in nine years of investigation into drug trafficking is that a general, a public security secretary or a governor is more dangerous than Chapo Guzman himself. They are the ones that betray the country, that sell the state to organized crime and they should face exemplary punishments. … If there are no exemplary punishments against the Mexican political and business class who permit people like Chapo Guzman to exist, then nothing is going to change and we are just going to be repeating this story of death, sometimes with more violence, sometimes with less, but always with the Mexican state under control of drug traffickers. We have to break this cycle. (emphasis added)