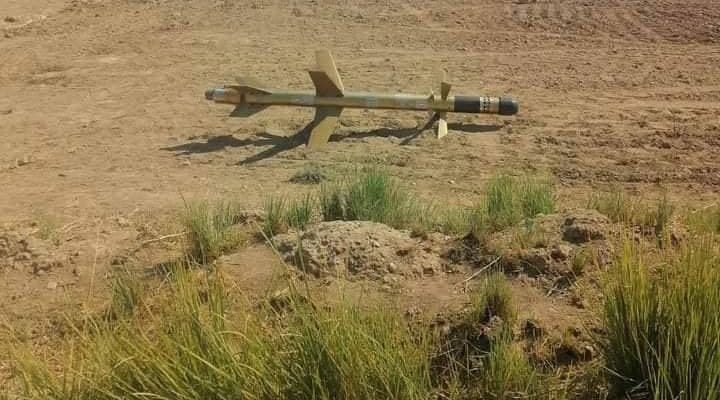 A 358 missile that was found by Iraqi security forces in Saladin on October 21.

On October 24, the Yemeni al-Masdar Online released photos showing the wreckage of a 358 loitering missile that is allegedly made by Iran.

The source who provided the news outlet with the photos claimed that the pro-Saudi wing of the Yemeni military found the missile wreckage in the district of Sirwah in the central Yemeni province of Ma’rib in July.

“The army found the missile wreckage last July, when the Houthis [Ansar Allah] announced the downing of a US MQ-9 drone in Serwah,” the source said.

The source claims don’t add up. The Houthis didn’t make such an announcement in July, they did so in March. Back then, a combat drone was indeed shot down. However, it was not a MQ-9 as the Houthis claimed. The drone was a Chinese-made CASC CH-4В of the Saudi military.

The 358 missile is equipped with an infrared seeker, a laser proximity fuse and a micro-turbojet engine. The loitering missile is reportedly designed to engage low speed aerial targets, such as drones and helicopters. The missile is also thought to be capable of targeting ground targets with high-precision.

Al-Masdar Online source claimed that the missile has a maximum engagement celling of eight kilometers and a range of up to 100 km. These claims may be false.

The mysterious missile was first seen in a weapons shipment the US Navy seized off the shores of Yemen last year. The shipment was allegedly sent from Iran to the Houthis.

Earlier this month, Iraqi security forces uncovered an intact 358 missile near a base of the Iranian-backed Popular Mobilization Units in the northern Iraqi province of Saladin. The missile could soon appear in other parts of the Middle East where Iran allies are active, like in Syria.

Armswatch.com has info on Serbian munitions that transited hundreds of kilometers through Croatia, only to be sent to Qatar via Rijeka airport.

At the same time HDZ pigs like kitarovic and plenkovic were “honouring” the anniversary of the dead and “unknown” in Vukovar. The Croatian SDP party continued the tradition in typical degenerate style. Honour the deceased of a civil war while transporting thousands of tonnes of Serbian munitions.

The Serbs themselves were told the munitions were intended for Bulgaria or Romania. Instead they ended up in Syria being used against the SAA and allies forces, example the Russians.

What do you expect from unhuman crooats-gorats?

From the people I would expect a lot. From the disgusting current government, nothing as they are criminal swine. They bring in “foreign tourists” to kill off the patriots of the nation.

Croats will open you a new asshole in Sarajevo. Just wait.

That is one busy missile, posing in photoshoots all over the globe!

Yo!
Reply to  Garga

If you have a good agent, anything is possible.

Our country has alliance with Egypt, Saudi Arabia and UAE.

Uhh… Good for you…

I don’t agree with Saudi Arabia though. Najdis are uncultured. But the Turkey-Iran-Pakistan axis should be stopped.

I envy you. You live in a very interesting world, where there are funny things like “Turkic-Iranian nations”, “Turkey-Iran-Pakistan axis” and magical genes exported by dialects.

That must be one helluwa good $#it!

This axis was told by Iakovos Alhadeff in our time. But it exists.

Bro I would give you my Facebook but one crazy American girlfriend hacked it.