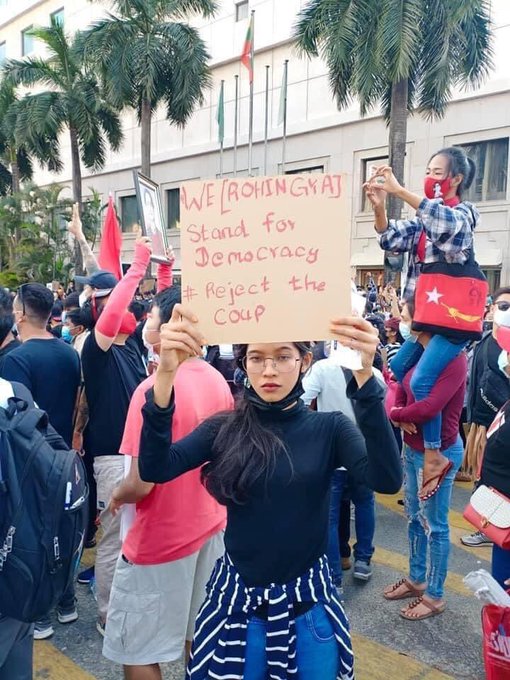 Demonstrating for the third week their determination to force the country’s military to return to its barracks, protesters in Myanmar appear to be learning lessons from a decade of protest in the Middle East and North Africa.

By the same token, Myanmar’s protesters, in stark contrast to public silence about the military’s brutal repression of the Rohingya minority in recent years, seem to want to forge a national identity that supersedes past emphasis on ethnicity and/or religion.

In doing so, they, like their counterparts in Lebanon and Iraq, reject sectarian policies that allowed elites to divide and rule and distract attention from economic and social grievances held by all segments of the population.

As they resist the military’s February 1 coup that nullified a democratic election won in November in a landslide by Aung San Suu Kyi’s National League for Democracy (NLD) because of alleged electoral fraud, protesters confront many of the same obstacles that demonstrators in  Thailand, Turkey, Sudan, and Algeria face.

The ability to address desperately needed reforms with a buy-in from the military will shape a return to democracy and the sustainability of the transition. Taking military concerns into account reforms will have to include civilian control of the military, defining the military’s mission in national defence rather than ideological terms, and regulating the armed forces’ vast economic interests.

The Middle East and North Africa provide cautionary tales like Egypt that eight years after a coup has become a brutal dictatorship and Libya, Syria and Yemen that are wracked by war, as well as potential models, that would serve Myanmar’s democratization well.

Tunisia, the one Arab country to have pushed political transition relatively successful, was able to do so because Zine El Abidine Ben Ali, the Tunisian autocrat who was overthrown in 2011, had ensured that the military had no vested interest in the country’s political system.

Mr. Ben Ali decimated the military leadership, severely cut the budget of the armed forces early on in his 24-year rule and sidelined the military, relying instead on security forces and law enforcement. As a result, the military effectively stood aside when protesters staged mass anti-government demonstrations.

The positioning of Tunisia’s armed forces may not offer Myanmar immediate options, but it highlights the need for a military that understands itself as a national institution rather than a party with vested political and economic interests.

Of more immediate importance to Myanmar is the fact that Mr. Ben Ali as well as the leaders of Egypt, Libya and Yemen were toppled by an informal alliance between civil society and either factions of the military or the armed forces as a whole. They shared a short-term interest in removing the incumbent from power.

The same is true for Southeast Asia’s people power revolts in the Philippines and Indonesia in the 1980s and 1990s. In Myanmar, it was the military that opted for a degree of political liberalization following decades of intermittent mass protest.

It took Tunisian civil society’s engagement with the security forces as well as other segments of society and the existing power structure to nurture the democratization process. By contrast, the process was derailed in much of the Middle East by a post-revolt breakdown of the alliance, often aggravated and/or manipulated by external forces.

The Tunisian approach enabled all parties to manage the inevitable divergence of interests once Mr. Ben Ali had been toppled, juxtaposing civil society’s quest for wholesale political and economic reform with the security forces’ insistence on the preservation of their economic and political interests and rescue of as much of the ancien regime as possible.

In Tunisia, like in other post-revolt countries, the divergence kicked in the moment the incumbent was removed. The Middle East and Southeast Asia’s experience demonstrates that the pitfalls are embedded in the compromises made to establish a transitionary government.

Inevitably, the military and/or security forces either constitute the transition government or are a powerful part of it. Their track record is one of taking liberties in protecting their interests.

Like in Myanmar this month, the military crosses red lines when the transition endangers those prerogatives. Learning how to counter the pitfalls of perilous but inevitable cooperation with at least segments of the military and/or security forces is a work in progress.

Turkey provides a different set of lessons. President Recep Tayyip Erdogan’s turn towards repression and authoritarianism in the wake of a failed military coup in 2016 suggests that civilian control does not offer a magic wand even if the takeover was foiled by protesters who set aside their social, ideological, and political differences.

If this is a cautionary tale, Turkey also offers solutions to at least one of the issues: the military’s economic interests. Turkey’s military, even before the imposition of civilian control, put its economic house in order by creating a conglomerate, one of the country’s largest, that is owned by the military pension fund and subject to regulation, civic and commercial law, and markets like any other privately held institution.

As civil obedience in Myanmar persists, protesters have certain advantages.

Rather than being on their own, the protesters benefit from being at the forefront of a wave of defiance and dissent that for the past decade and no doubt the next is fueled by a breakdown in confidence in political systems and leadership.

With the pandemic, the widespread mismanagement of public health responses, the global economic downturn and dislocation, and technological change, the coming decade promises to be perhaps even more turbulent.

In addition, Myanmar protesters’ may be beneficiaries of the electoral defeat of US President Donald Trump and the rise of Joe Biden, who has pledged to make human rights a central plank of his foreign policy.

Granted, US adherence in its foreign policy to its human rights values has at the best of times been checkered.

Nonetheless, Mr. Biden’s approach, even if imperfectly applied, erases the permissive environment that autocrats enjoyed during the Trump years.

There is, moreover, a reason to believe that Mr. Biden will be truer to his pledge because it is key to US efforts to repair the credibility and reputational damage suffered by the United States because of Mr. Trump’s America First policy; disdain for multilateralism, international institutions, and international law; empathy with autocrats; and disregard for human rights.

Playing into Mr. Biden’s emphasis on human rights is the fact that the protests, like in Lebanon and Iraq, appear to have broken down ethnic and religious fault lines.

Burmese who in recent years used Twitter to attack and threaten Rohingya activists living in exile have apologized since the February coup, recognizing that military rule poses a threat to all.

Political transition, like reconciliation, is a long-drawn-out process that can take up to half a century to play out. It is a process of two steps forward and steps backwards as Myanmar is discovering now.

The Myanmar military understands that tacit Russian and Chinese support may not be as much of a lifesaver as it was in the past. That may explain the military’s reluctance to crush the protests even if the likelihood of an imminent crackdown is high.

If the experience of Egypt is anything to go by, the military can brutally suppress and keep a lid on unrest for a period of time. It may preserve the military’s interests for a while, but it cannot provide sustainable economic solutions or ensure stability.

In contrast to Egypt, protesters in Myanmar have the advantage that they are demanding recognition of a current election outcome that could put a new government in a position to redefine the role of the military and regulate its economic interests.

Based on the experience of Egypt, one core bone that the government would likely have to throw the military is immunity against prosecution for past crimes. That may be a bitter pill to swallow and violate principles of truth and accountability as an important pillar of transition.

As Egypt demonstrates, it offers no guarantee of keeping the military in its barracks. But it may be the carrot that helps entice the military to make the concessions needed for a democratic transition.

For now, Myanmar cries out for non-partisan independents capable of helping the military and the protesters to back away from a zero-sum game that seems destined to result in bloodshed.

That is likely to prove a gargantuan task as Indonesian Foreign Minister Retno Marsudi spearheads efforts by the Association of Southeast Asian Nations (ASEAN) to mediate a way back from the brink.

In the words of former International Crisis Group Myanmar analyst Morten B. Pedersen “when a military obsessed with order and stability…confronts an essentially leaderless popular movement driven by youthful anger and shattered hopes, compromise is perhaps the hardest thing of all.”

Democracy and human rights in the Western version only mean plunder, privatization, hunger and misery, and above all prevent the autonomous development of the targeted nations, the Western lifestyle is already dead for the peoples of the West and has no future for the rest of the world, each people must follow their own path, mimicking Western imperialism is not the way.

it happened here in the philippines after the coup in 1986, most government owned company become private, prices skyrocketed, standard of living are decreasing and a long term planned for development has been stop. before the coup, philippines is top highest gdp among asian 2nd to japan

There is no democracy in what was once the west. They are all slaves of the racist supremacist global Jewish satanic slave empire dictatorship.

Unlike yours. Are you jealous?

The “Rohingya” fake tribe joined the protests….what a nice surprise

You couldn’t recognise a Rohingya to save your life. Stick to things you know about.

The racist fascist Buddhist genocidaire Myanmarese have “apologised” to the Rohingya, have they, while they were massacring them just the other day? What a laugh.

You mean The proto- jihadi Islamist trespassers ? The ungrateful guests ala Kurd style ? Even Indians are getting sick of them.

They’ve lived in Myanmar so many centuries that they developed their own language.

As for Indians, I’m one, so I know exactly what I’m talking about.

And putting a link from Voice of Amerikastan is so credible. You aren’t only an ignorant racist, you’re a propaganda monger.