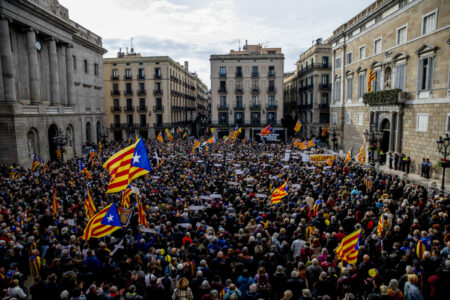 On December 6, Day of the Spanish Constitution, a massive demonstration was held in Barcelona to reject the future reform of the penal code. The Spanish State has an improper crime in Europe, the crime of sedition with which the politicians who organized, in 2017, the Catalan independence referendum were convicted.

This crime, created in 1822, condemns with very high penalties mass demonstrations that prevent the enforcement of laws even if no violence is used. In Europe it would be considered an anti-democratic law because it can impede the right to demonstrate. That is why the justice in Belgium, Germany and Italy, not observing violence in the investigated facts, rejected the delivery to Spain of the Catalan president Carles Puigdemont for sedition.

For all this and by request of the Council of Europe, Spain was forced to eliminate this crime, but wants to replace it with a new crime of “aggravated disorder” which aims, according to the members of the Spanish Government, to be able to continue condemning any type of large non-violent demonstration made by the Catalan independence movement.

Apparently the maximum penalties for this new crime would be lower than the previous one, but ultimately the same sentences could be reached for the organizers of the 2017 referendum (from 9 to 13 years in prison). Moreover, in this new interpretation, a mass demonstration would be a crime if it is considered to “obstruct the public road”, to “intimidate” (a very ambiguous term), to “occupy a building or facility” without violence, or if “a crowd suitable to seriously affect public order” (very ambiguous) is summoned or attended. To make matters worse, the minimum sentence for this crime (which could involve participating in a non-violent demonstration) is increased to 3 years in prison!

Also the Spanish government have justified this new crime because it will allow to extradite from Belgium the president Puigdemont, as if they had written this law ad hoc to lock up in prison the “number one enemy” of Spain.

The pro-independence movement rejects this change of one crime for another, because a crime that had its days numbered is repealed, but is replaced by another crime that is designed to prevent the Catalan pro-independence project, without caring about violating fundamental rights. And all this for the simple fact that the ultra-nationalist Spain, which emerged from the Franco dictatorship, does not accept what this legitimate political movement proposes and thinks that anything goes to maintain the unity of Spain. But that is not so, democracy and the right of self-determination of peoples are superior values that must be respected.

This is bad actually. Why should Catalonia secede? Every part has to make reforms. Secession will in fact be in the interest of globalist banksters in order to break up states into smaller ones controlled by them.

Bankers? You may have a point in theory — the problem is that it needs to be backed by concrete examples from recent history. Otherwise, with this excuse any central government could get away with anything.

Even if the so called central government is bad, secession may bring more problems.

This piece is utterly misleading.

Sedition is a crime across Europe, it revised latest in 2015, Puigdemont ceased to be the president of Catalonia after he abused legal powers by declaring unilateral independence.

But most importantly, even if the pro-independence movement claimed falsely that after independence a newly formed Catalan republic would still be part of the European Union (a claim dismissed by the EU itself), or bizarrely that FC Barcelona would still play on Spain’s La Liga, polls show that support for independence remains lower in Catalonia than support for continued membership of Spain.

So it is not only being able to muster a crowd that counts: you need a majority, and you need to respect the law.

Publishing this sort of badly misleading information hurts trust in Southfront. If the website seeks to compete with more established sources, a minimum of filtering of the news it publishes must be applied.