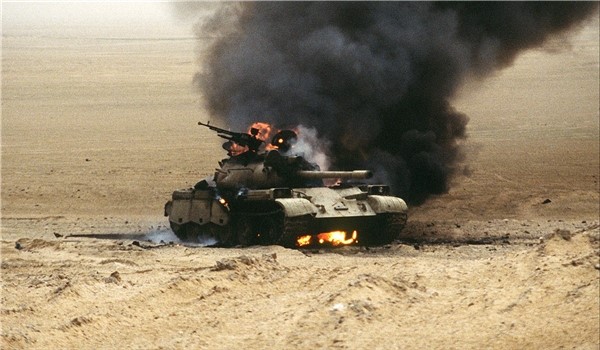 Clashes between Syrian army troops and ISIS terrorists intensified in the area of the Tharda Mountain and the cemetery in the city of Deir Ezzor.

Government forces actions against ISIS units were supported by multiple airstrikes by Syrian and Russian warplanes.

According to local media activists, over 20 airstrikes hit ISIS targets in the areas of the Tharda Mountain and the cemetery as well as Bgheliya, Hamideya and Hweika.

Last weekend, ISIS increased its attacks against the Syrian army in the Deir Ezzor Airport and the nearby areas, using a number of suicide bombers to break government defenses but the terrorist group failed to achieve a significant progress.

Daesh nuts roasting on an open fire, more pictures of this please. What about using some thermobarics and white phosphorous at night so ISUS can see better!

I thought that an advance on the Deir-ezzor capital would soon follow after Palmyra was successful captured but today SAA and Russian Special Force are still stuck around the amphitheater.

That along with regaining full control of the region’s oil & gas fields which supply the refineries and electrical generation stations in Western Syria. ISIS is desperate to hold those fields since Assad was forced to buy oil and gas from them to keep the lights on and motors running. I believe there’s a few to the NW that were just discovered before hostilities broke out so only have a few operational discovery wells which aren’t on-line yet.

wow thats a shame he had to do that :( yea i hope they take all of them with minimal to zero losses

It appears that Israel-ISIS and Al Cia da are retreating from the kurdish forces and concentrating their forces against the Syrian government alone. They have surrendered almost all the territory around Rakka rapidly, with no major battles at all. ISIS is showing its true Israeli color, as Israel only opposes Assad like its ISIS puppet.