The aftermath of the Trump-Putin meeting in the headlines of US media can be summed up by former CIA Director John Brennan’s comment on twitter: “Nothing short of treasonous”, while Senator John McCain angrily stated, “Today’s press conference in Helsinki was one of the most disgraceful performances by an American president in memory.”

Surprisingly even Fox News, who seldom criticize the President over “throwing his people under the bus” and openly siding with Russian intelligence community and law enforcement agencies.

Neil Cavuto of Fox Business calls Trump’s press conference “disgusting” and something that has set the US “back a lot”. Fox was the only network given interviews with Trump. Sean Hannity and Tucker Carlson both did not criticize, rather sided with the president and partook in conspiracy theories regarding Peter Strzok, the FBI agent at the center of the Russia investigation, and the “13 angry Democrats” in the special counsel probe.

In their article regarding the summit, Fox News states that President Trump made several critical errors. Firstly, the visual – while Putin seemed totally in control, Trump lacked focus and authority, avoiding questions and praising Putin, instead of condemning him for allegedly meddling in the elections and annexing Crimea. Secondly, rather than confront the Russian leader on the allegations of meddling in the elections he openly supported him and called the allegations false. Third, Trump made an error in assuming that the relationship between Russia and the US was due to equal and mutual responsibility. Accepting that the US mistakes in international politics were equal to those of Russia in the face of annexing Crimea, the alleged shooting down of a civil airliner, the “aggressive” behavior towards NATO allies and the alleged poisoning of Sergei Skripal. However, his fourth, and according to Fox, biggest mistake is that Trump was unwilling to support his intelligence agencies and also offered to cooperate with Russia on cybersecurity – something Fox News call “the foreign policy equivalent of inviting the fox into the hen house to safeguard the eggs.”

CNN have dubbed their article “Putin’s Poodle”, after The Mirror’s headline of the day after the July 16th summit. They review global newspapers all of which announce Putin’s resounding political victory over the confused Trump. He, according to Rep. Adam Schiff, the ranking member of the House Intelligence Committee, quoted by CNN, sounded like he was “a hostage forced to read something.”

CBS review on the summit presents the shock and disgust at Trump’s conduct at the press conference. Quoting Arizona Senator Jeff Flake “I never thought I would see the day when our American President would stand on the stage with the Russian President and place blame on the United States for Russian aggression. This is shameful.” The entire article quotes various political allies and enemies criticize Trump of how, at least, visually fails to “understand” that Putin is not his friend, nor his ally. They also mention that the one-on-one meeting had no resolution to tensions between Russia and the US. What Trump seems to find important, according to CBS, is that Putin was “strong” in his denial of the US election meddling. On the most important questions such as the denuclearization Trump was vague, Ukraine was not even mentioned. The biggest criticism CBS has for President Donald Trump is that most of the criticisms he had were saved for America itself.

The Guardian reiterates what other medias have also said, it confirms the condemnation from all political sides, media and citizens. Furthermore, quoting Republican senator Lindsay Graham after Putin’s gift of a World Cup to Trump, who said he would give it to his son, Baron. Her exact words were “I’d check the soccer ball for listening devices and never allow it in the White House,” which also carries the entire notion of US media and political figures that Russia is not a friend, it is not an ally, despite what Trump allegedly thinks.

The New York Times, reviews opinions on the Left and Right, by quoting various authors. While some of them are in support of the idea to improve relationships with Russia, all of them agree that Trump approached it entirely incorrectly and has most likely caused much more harm than good.

The Huffington Post, however, has one of the more interesting articles on the subject of the summit. They quote Democratic Senator Jeanne Shaheen who calls for a hearing with the US Interpreter who was present in the meeting. The reason behind the request is that Congress needs to know what Trump “promised to Putin on our behalf.”

All major US headliners are condemning Trump’s conduct at the press conference and the meeting, while foreign editions are openly mocking the President of the US.

Peace is definitely not part of the combined Pentagon and Neo-Con nexus-agenda, the first want a long term major foreign bogey-man to boost annual security budgets and expenditures, and the second want regional wars in middle east to reconfigure the map and resources to benefit of Israel. The US corporate MSM is merely the diluted mouth-piece for these combined self serving agendas.

“The US corporate MSM is merely the diluted mouth-piece for these combined agendas.”

…..together with the intelligence (oxymoron) community, corporate sponsors and lobbyists, otherwise known as the Deep State or (lately) the swamp.

Ya but the reason it works is because the US populace is so ignorant and disconnected from the rest of the world. Should the situation be reversed and the Russian MSM is calling Putin a oentagon agent and what not, the Russian people would laugh and disregard that nonsense as just that, utter nonsense. Russians think for themselves, they are taught to think. Americans and most of the West are taught to follow and to not question shit.

The lying Jew world order media and their bribed and coerced swamp slaves are diametrically opposed to what most Americans want and what America First is all about. So it shouldn’t be surprising that they reject the President of the United States when he rejects them in favor of what the overwhelming majority of the people on this planet and most Americans want. Which is an end to the Jew world order criminal insanity of endless fabricated wars to force Jew world order hegemony and slavery on our planet.

The US needs to be dejudified. Judaism should be outlawed in the US and worldwide.

The UN should conduct an investigation of the Jew mass rape of 1,000 of their cult babies worldwide every week, infecting them with venereal disease, brain damaging and murdering them. As part of outlawing Judaism and dejudifying our planet. In NYC alone:

“Oral copulation is defined as any contact—no matter how slight—between the mouth of one person, and the sexual organ or anus of another. Neither penetration nor ejaculation/orgasm is required. …

Oral copulation with a minor is necessarily a felony if both of the following are true:

– Oral Copulation with a Minor –

As a result, several groups have been made into recognized criminal organizations. … These cults have generally been involved with activities like murder, abduction, statutory rape, or other serious crimes. Often, they hold an illegal activity to be a primary focus of their religious teachings, making adherence to the group’s beliefs a virtual guarantee of grossly illegal activity directly harming others.”

Who is the author of this tripe? There is nothing at all about where this article came from. Southfront, please provide information on the author or authors of this peice. Thank you.

I will assume there is an author of course. The author, whoever they are, makes no attempt to hide the pervasive bias that runs from the beginning to the end of the article. The one time attention is given to those with a different view they are discredited:

The author undermines the two media personalities that did not go with the herd – labeling them as conspiracy theorists, which indirectly also reveals the author’s attitude toward alternative media which for this article, do not exist.

The article is mostly a ramblingnarrative quoting MSM criticism without any real analysis. Worse, the article fails to convey the seriousness of what is taking place. We have the Former head of the CIA accusing the President of the United States of treason. This is unprecedented but the author gives it no more heed than other banal criticisms about the damage Trump has done, without any explanation of what or how.

Does it not seem odd to the author the sheer hysteria and unanimity coming from the media?

There is a purpose to this of course. Setting the stage for impeachment. The author knows this because he/she is doing their part in the charade by writing psyop articles such as this and how the article begins and ends is very telling.

The Huffington Post article cited at the end is implying Trump made a secret deal with Putin that is harmful to the interests of the US – in other words treasonous. And it just so happens the article begins with the accusation of treason.

I know how psyop works. This is classic psyop.

“…The Guardian reiterates what other medias have also said, it confirms the condemnation from all political sides, media and citizens…”

First of all, Guardian ‘confirms’? Well, thanks for that laugh. Second, the Guardian/western MSM narrative of ‘Evil Russia’ should not be confused with the overall failure of that propaganda on what citizens actually think or are worried about. The attached monthly opinion poll is from the U.S. – “The situation with Russia” worries less than 1% of those polled. Judging by the MSM hyperbole alone, an outsider would think half of Americans are pacing back and forth frantically obsessed with ‘the Russian threat’. Note that ‘the Iranian threat’ doesn’t even make it on the response list – sorry, Israel.

ZeroHedge: Gallup Shows How Much Americans Really Care About The “Situation With Russia” 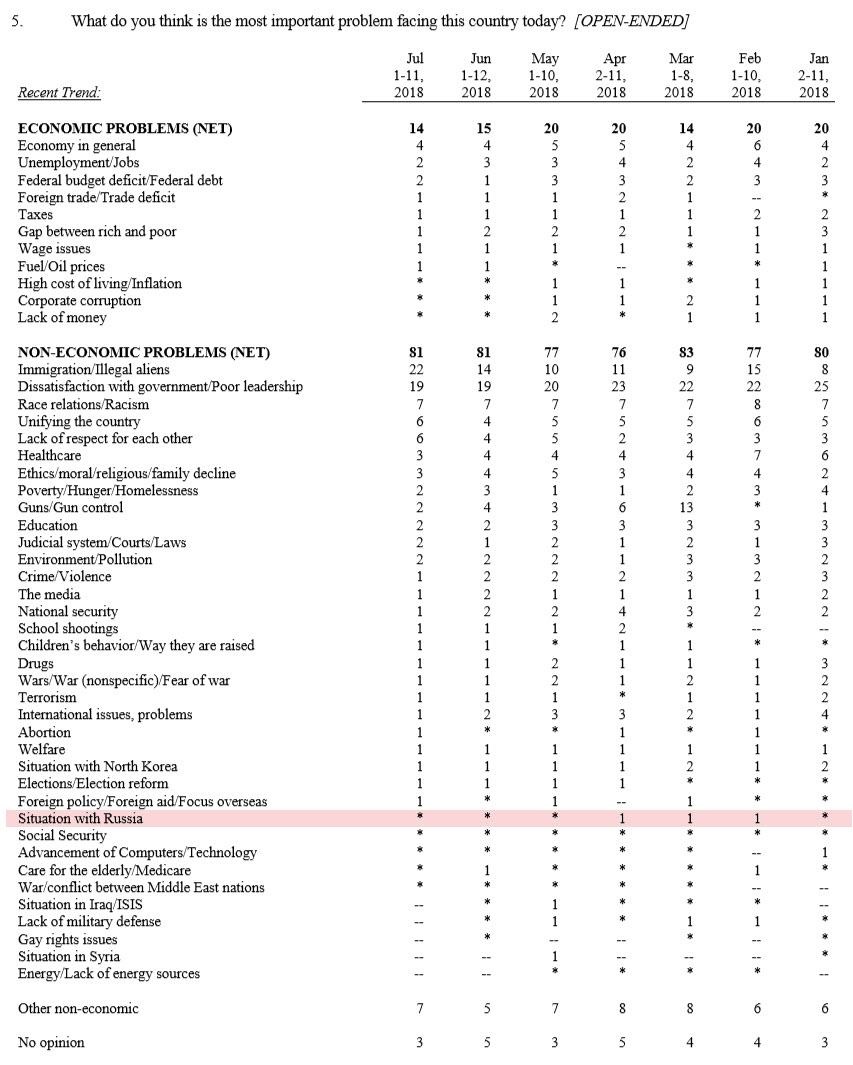