US F-22 Raptor stealth fighter jets deterred 587 “enemy aircraft” during their first “combat surge” in operations over Syria, the Pentagon reported on October 10.

According to the released statement, during the 6-month deployment, the 94th Fighter Squadron “logged over 590 sorties and more than 4,600 flight hours, dropping 4,250 pounds of ordnance and deterring 587 enemy aircraft. The squadron also accomplished the first-ever F-22 Raptor combat surge, which maximized combat sorties over a 3-day period.“

F-22 jets of the 94th Fighter Squadron als escorted F/A-18 Hornet warplanes of the US Navy in the framework of their operation.

“The squadron also flew Offensive Counter Air missions deep into Syrian territory, facing both enemy fighters and surface-to-air missile systems, as the United States and Coalition forces launched deliberate attacks in response to the Syrian regime’s illegal use of chemical weapons. On several occasions, the Raptors provided armed over watch for U.S. Navy aircraft as they transited through the Straits of Hormuz,” the Pentagon said.

Besides this, it’s intersting to note that some media went so far in their war-style rhetorics amid the US-Iranian tensions and reproted that F-22 jets even intercepted Iranian warplanes. For example, Business Insider reported:

“Russian, Syrian, and Iranian combat aircraft all operate in the skies above Syria, and US air assets have frequently deterred or defeated air attacks against US troops there.

US F-22 Raptor stealth fighter jets just completed their first “combat surge” in operations over Syria, and in doing so deterred almost 600 enemy aircraft in the crowded skies there that see Syria, Iranian, and Russian combat aircraft on a regular basis, the Pentagon said.”

The only problem with these claims is that Iran does not use fighter jets in its military operation to support the Syrian government. The only offensive air component of Iranian forces in the war-torn country is unmanned combat aerial vehicles, which can hardly be “deterred” because they pose no threat to warplanes of the US-led coalition flying over Syria.

Any story that plugs up US Air capabilities is a good one to benefit the Pentagon, true or untrue is an irrelevant considerscon, what we have here is a time warp, Civilization is back in the 19th. Century.

Put there by Christianity and their misuse of the Holy Ghost, don’t be sucked into the Christian damnation, worship only Allah and join me and Brother Erdogan dish it up to the PKK / YPG terrorists in Iraq and Syria, the US supports them with air cover but Iraq is abandoning poxy US hegemony, so pretty soon the F22’s will have no place to land, if Allah is willing.

ah! The propagandists got their tinsel in a twist again. I wish that they were exposed more often.

This lead balloon of a story should have been reported bon and mocked more widely. 587 planes deterred????

Iran is also building an airbase on Mars. And those flights were also intercepted by F-22 on the dark side of the moon. True story from MSM archives :)

Scientists at the Russian Space Research Institute, meanwhile, recently
confirmed that the nation has the means to set up the first lunar module
around that time.

You must mean you shat 4250lbs of missile when su35 locked on you?

Why do you got to get all factual and ruin a good story?

Another US Fairy Tale story Russ ,in my opinion :)

Like the Hollywood narrative on “Israel” and so-called “persecution” of 6 million “Jews” when barley 2.7 million lived in Europe :)

Those numbers of Yours are highly incorrect. Your numbers might be for western Europe, but the high numbers of jews were in Austria/Hungary, Poland, Lituania and Russia.

All Jew numbers were made up by Hollywood circa 1945. No one knows how many of the vermin existed or exist. Most of the Khazars are not Jews anyway, but western welfare Jews for the occupation of Palestine circa 1948.

Sorry to inform you there were 14.2 million Jews accounted for on mainland Europe in 1938. Their number increased to 14.7 million by 1947. That is an increase of 3.5%. The population of Germany over the same period was 69.3 million in 1938 and in 1947 W-Germany 47.8 million with E-Germany 10.1 million with an estimated 1.5 million stranded in E-Prussia and Silesia which shows a drop of 10.1 million a percentage drop of 14.6% while the USSR had a 19.8%. The French over the same time frame suffered a 1% drop from 41.5 million to 41.1 million. So, the Jews were the only “nation” to buck the trend. Had they fared as badly as the USSR over 3 million would have died or as badly as Germany over 2 million would be absent….

Hahaha all Jew math is false. Jews are like cockroaches and hard to census as they crawl from woodwork to woodwork.

Actually they landed at the Eufrat to be cool.

It’s been recently reported that the F-22 has been taken out of the Middle East.

What we can say that MSM have done too much progress in fake news.

US and UK forces have trespassed into other countries around the world and are joking with the international law. They have been known for doing these crimes for the very long time and butchering people there on the name of peace etc. which is totally bullshit.

The nation of each country are struggling for very long time to kick out these trespassers from their lands. Now this is a clear responsibility of the whole world to come together and clear this cancer from the whole world for the benefit of the world population and claim damage from them that they have caused to them.

Pandora, anyone? Russia plans to set up moon base inhabited by ‘avatar robots’

hahahaha US loonies are going to go more nuts as the fat orange lardass lost control of Congress and Americunts head towards a civil war. MSM must have access to F-22 faulty data and now Nutter Yahoo is threatening to attack Russians In Syria if the S-300 down Zionist flying junk F-35.

And Iranian stupid ajatollahu regime claimed it has fighter jets like this one: 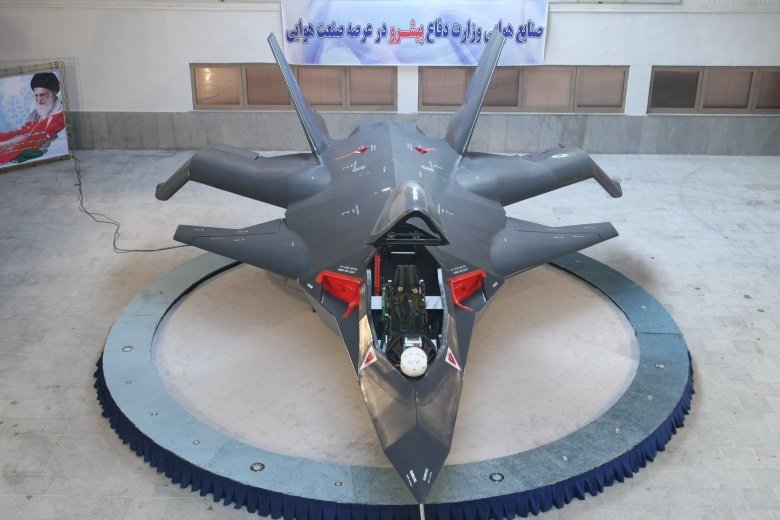 ?itok=jqfLi-v9
but alas, they don’t have any (now confirmed) :D.

The only fighter jet Iran has is F-5 which was light fighter and reconnaissance US jet used in Vietnam War 50 years ago.
Iranian military equipment would be nice for any museum exhibition, but it is laughable for any modern fight, especially against US-Israel air force.
Iranian jets are probably on pair with North Korea ones, but North Korea has at least nuclear deterrent.

Any fighter jet how much modern or how much stealthy or from which country is that cannot save from S-300 which Iran and Syria both have. Right.

For your information upgraded F-5s are still being used by Switzerland, Taiwan, S. Korea, Singapore ….etc.
Don’t underestimate what the Iranians did with the F5 derivatives.
According to unofficial reports F20 Tigershark which was an F5 upgrade did quite well against F15s.

Ehm, I really don’t need to get any information about US jets as I’m quite expert in the area. You could mention even that US army is still using them as training jets but they are hopelessly obsolete anyway.
They should be scrapped 20 years ago already. That’s why even in the USA they have contract ongoing for new military trainers and the hot candidate is superb Russian Yak130 design, which was already sold to Italy and China because of stupid Russian policy to sell their best weapon blueprints to anybody who pays , but it is quite different story.

Russian weapons exports are not identical to the ones for domestic use, and US is not going to buy any Russian weapons, they would rather buy Trophy instead of Arena or Afghanit.
Singapore, S. Korea, Taiwan, Switzerland do not agree with your assesment that upgraded F5’s are junk.

587? Sounds like they just plucked a number out of their asses. Who was counting? Trump? “1…2…3…ummmm what comes after 3 guys?”. Business insider? Whats US air sorties got to do with business? Trying to make the publication sound legit with a name like that. Should be renamed “Propagandist Insider”. I check their FB page. Not many people comment and most sound like the typical dumbed down sheeple.

MSM CLAIMS hah well I claim that tomorrow I will be the President of Russia or the US believe me.

The Pentagon and their utter bullshit would be funny if they weren’t so laughable. My buddies 6 Y/O granddaughter tells better stories.

Anymore hurricanes and the U.S. might have fewer than 100 F-22’s left to lose.

This is usual US utter nonsense. Iran has no combat aircraft in Syria or any other country. However, the fact is that Zionist criminals have stopped flying close to Northern Occupied Palestine and Lebanese borders after the deployment of S-300.

Fricken Yanks.. patrolling someone elses airpsace like it was their own..

Love to see them get blasted out of the sky.. and land on NutterYahoos head..

It is time Russia and SAA move some S-300 and other SAM systems to the Euphrates Valley and start shooting down all intruders. Also ground support for Syrian tribes fighting against US and its ISIS pals should be increased.

It puzzels me why they don’t confront these voilations of their airspace with their existing defence systems.
The Taliban don’t hesitate and have managed to give the Yanks hell with just second hand kalishnikovs.

You’re assuming the story is true.

Its in the nationalistic Holy Choran of his.

Its because You are lied about all facts about it, and are learned by birth to eat it too.

I don’t have a Choran.. and you know you should really get out of your parents basement. All you do is hang around here all day long posting inane dumbass comments that are really tedious to reply to.

Finally we found a new definition of the ‘American Dream’ … !

Thor’s hammer don’t got anything on our god machine, F-22. Be afraid and kneel before our machines of death………………cue maniacal laughter.

Most training has fictive enemies or none.

Three days is all they could manage, and it will mean all of those aircraft will be out of action for a month.

No, they wont. Fx they also could regain in the SDF zone.

The US President has lost control of the congress. His extraordinarily abrasive foreign policy in favor of the Jews was probably a contributing factor. This is probably going to lead to further instability in the US and internationally.