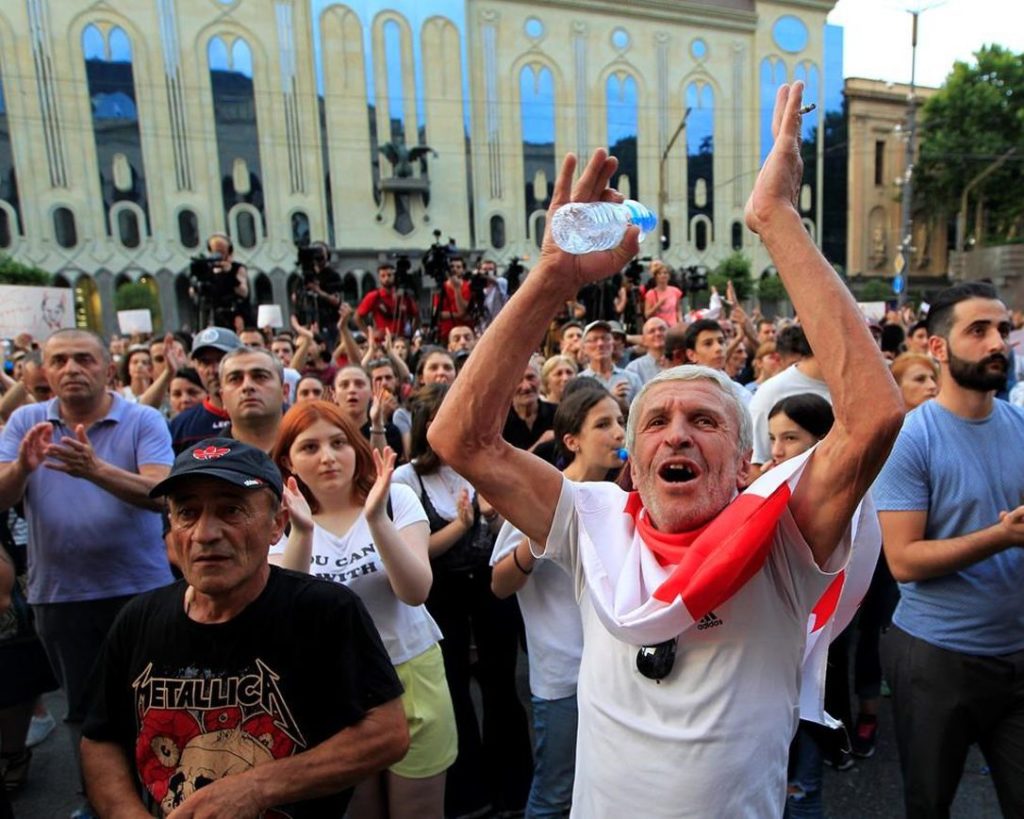 On June 30th, anti-government and anti-Russian protests in Georgian capital Tbilisi continued for the 11th day.

Very little has been achieved since the protests began, all sides – the government, opposition and protesters themselves are fueling the constant anti-Russian hysteria that appears to actually lead to nothing conclusive.

Starting from midday on July 1st, protesters are gathered in front of the Sheraton Metechi Palace Hotel, where the presentation of the constitutional initiative of the ruling Georgian Dream-Democratic Georgia – 2020 Proportional Elections is being held.

The protesters demand resignation of the Minister of Internal Affairs Giorgi Gakharia.

According to the participants of the rally, the government should start working on the electoral changes only after their demand is met.

The US Embassy in Georgia said that political dialogue must ensue between all political actors in the time of Georgian crisis.

“The U.S. Embassy is following closely developments in Georgia after the June 20 protests in Tbilisi.  Although it is important that acts of violence, as well as incidents of excessive use of force against demonstrators, be investigated, we urge the Georgian authorities to proceed with balance and restraint.  What is most needed at this time is a dialogue among all political actors that will strengthen Georgia’s democracy”, – the statement published by the US Embassy reads.

The government, in the face of President Salome Zurabishvili and Prime Minister Mamuka Bakhtadze both said that there was no police violence against protesters, despite the claims by the opposition, and that even the policemen were actually subject to violence.

Despite the entire unclarity of the Georgian crisis, with both politicians showing no willingness to instate any changes and protesters not really knowing what they’re protesting for or against, MSM, as well as liberal Russian media are using every chance they get to reinforce their “support” of Georgia.

A notable example is CNN, with its article “To spite Putin, come visit Georgia.”

“In reaction to these #TbilisiProtests, Putin is trying to punish, subdue, and bankrupt the Georgian people for speaking truth to power, for exercising their right to assemble and for ultimately sacking their speaker of Parliament, who resigned after protesters demanded it. Controversy arose after a Russian member of Parliament delivered a speech to Georgian parliamentarians in Russian, the BBC reported. If Putin has his way, the Georgian economy will lose up to $300 million, according to one estimate cited by Russia’s state-run TASS news agency.”

So, the anti-Russian hysteria, aggression against journalists, in addition to the continuous calls of “Russian occupiers,” MSM aside, even liberal Russian media said nothing.

But Russian President Vladimir Putin is, according to the current narrative, unilaterally and without any provocation “starve the Georgian economy.”

Of course, CNN even has an explanation for Putin’s “evil actions”:

“Why is Putin doing this? For two reasons: First, he is terrified that the Russian people will see protests in Georgia and do the same. Second, Putin wants to twist the narrative to make the Russian people think that the protest this weekend was a Russophobic demonstration (pro-Kremlin media outlets, according to the Georgian site civil.ge, portrayed the protests as undermining Russian-Georgian relations).”

The request simply asks Moscow to close its eyes to reality and act as if there is anti-Russian hysteria going on.

“Unfortunately, some politicians holding responsible posts are incompetent, they do not solve problems, but create them. I consider completely inappropriate and thoughtless statements that Russia is the organizer of the protests and no public contacts with Russia, even purely cultural ones, are possible. I am confident that the leaders of Russia and Georgia must finally sit down at the negotiating table and find a way out of the problems that have accumulated over the years.”

Notably, Nino Katamadze a famous Georgian singer, that had a concert in Moscow on June 22nd was scrutinized by protesters for entertaining the “occupiers.”

In a Facebook statement, Katamadze addressed her listeners, as well as the entire Georgian public, offered them apologies for not being with the protestors on the night of June 20 and stating that all the healthy criticism of the public about her address is absolutely fair. In addition, she spoke about the reasons for her performance in the Russian capital on June 22.

“June 20 was the most difficult day and the concert on June 22 the hardest in my life. The only reason I did not cancel it was a sight impaired 9-year old girl, who had dreamed of coming on stage with me. However, I stated this at the concert and want to also tell you, it was my last concert in Russia!” reads Katamadze’s post.

On June 30th, she joined the protests and said that she wouldn’t set foot in Russia again. Despite that, tickets for her March 27th, 2020 concert in Moscow are still on sale. She also had no issue organizing numerous concerts, which were attended by thousands for more than 10 years.

He noted that the people of Georgia are very talented and are respected in Russia.

Georgian singer Nino Katamadze is also very talented, but apparently, she doesn’t know much in terms of politics, stressed Peskov. “If she has questions, we will always be ready to explain everything to her,” he added.

Peskov also warned Russian artists from visiting Georgia and that it could prove dangerous.

“Our artists now have to take into account that this could be dangerous. We didn’t hear from representatives of Georgia condemnation of those thugs who tried to break into parliament and attack people’s deputies of another country, we didn’t hear a word of condemnation of these actions, therefore our artists simply need to understand that it may not be safe yet,” Peskov told reporters.

Finally, he reinforced that Georgia’s rhetoric and actions cannot be accepted positively by the Russian government and that no normalization of relations is possible, until Georgia changes its policy.

In a further response, Russia limited imports of foreign-made wines. Georgia exports most of its wine to Russia, and Tbilisi is unmentioned in the decision, but it’s likely related to the developments.

The statement claims that the country has decided it wants to support Russian winemakers.

“The main thing is that the government agencies that purchase foreign wines for their own needs will understand that Russia has enough good wine, with which you can present yourself at events for which they are making these purchases. This is the first. And the second: this is a signal to the Russian business, that the state is generally ready, where it is possible, to help in the implementation of Russian wine production, “Leonid Popovich, president of the Union of Winegrowers and Winemakers, told RIA Novosti.

What is a currency note? It is like a bond an official proof of a deal.

Each saving bond has a value from 1000 to 50,000 or more depends up on the currency value. If that work so it means that a new currency will also work.

State bank also allow other banks and traders to check the validity of the currency otherwise fake currency would be introduced. Its much safer than US dollar because for US dollars they would have no ability to check its validity.

This was left from CIA and MOSSAD. Finally they hit Georgia as well. In which country there is US embassy there would be problem.

Russian and Georgian economies are better off without each other. For Georgians it mean less Russian influence, for Russia hmmmm well Russians wouldn’t want to use Rusophob products.:)))

I wonder how long it’s going to take for Georgians to realize that they are more brainwashed than even Americans? They want to attack Russians for speaking Russian, dump movies subbed in Russian, riot and bad mouth Russia…then get pissed because the Russian gov advises people not go there because it’s not safe? Sure, Russians, go vacation in Georgia, maybe you’ll have the time of your life. You too can be the subject of a riot. The government must have quite the noose on the media, even moreso than US MSM. All this time I thought it was only the US that would shoot itself in the foot to spite another country. At the rate Georgia is going, even the infamous IMF won’t be able to keep them afloat. They damn sure can’t rely on the west, look at 2008 and read the writing on the wall. They started shit and the west watched, when it all went south, the west watched. What else were they going to do, their plans were for naught? It looks to me like the only real goal of the west is to destroy old soviet states so they can eventually be run by madmen. Ukraine 2.0? Hell, maybe they can even be part of the US LNG bullshit initiative…then their economy can really take a dump. Fools.

How many of the “protesters” are paid, and what percentage of the paid are backed by George Soros?