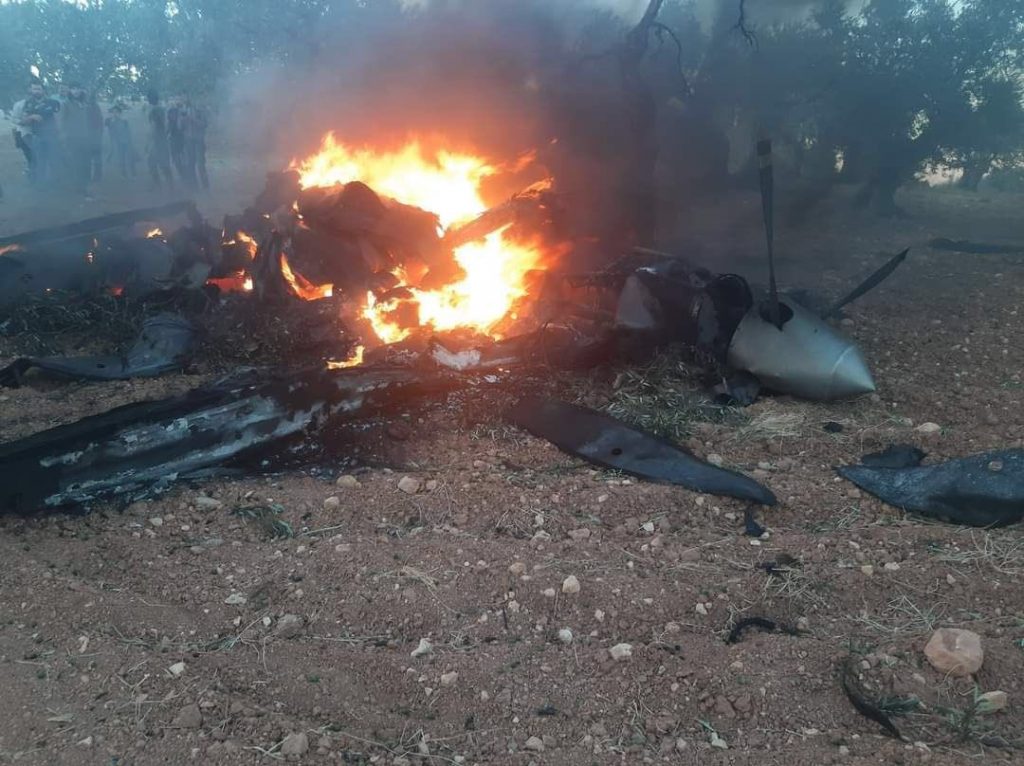 UPDATE: US military media outlets are now claiming that two US drones collided over Idlib.

Images of burning aircraft crashing to the ground were posted on twitter Tuesday. There was speculation that the aircraft were MQ-9 Reapers — a remotely piloted aircraft used predominately an armed hunter-killer drone but also capable of surveillance and intelligence collection — and were shot down.

However, the defense official could not confirm the type of drone involved,” militarytimes.com wrote.

On August 18, the MQ-9 Reaper combat drone of the US military was shot down over the Syrian province of Idlib.

Pro-militant sources initially claimed that the shot down drone was something belonging to the Russian Aerospace Forces. Nonetheless, photos and videos from the ground clearly demonstrated that it was the MQ-9 Reaper.

#Syria: photo showing the drone shortly after if was blown up by a MANPADS today in N. #Idlib CS. pic.twitter.com/MyCKznK0Es

It looks like the Turks ‘accidentially’ shot down the combat drone of its NATO partner state. It may be that Ankara has been angered by regular US drone strikes that target its lovely al-Qaeda proxies in northwestern and northern Syria.

It is interesting to note that the incdient happened near the area previously targeted by Russian airstrikes in respnose to the recent IED attack on the joint Russian-Turkish patrol in southern Idlib.

Reports also appeared about some second drone that supposedly crashed in the countryside of Idlib.

Some sources even claim that there may have been a launch of surface-to-air missile (possibly a Russian one). If the speculations about the Russian missile are confirmed, it may appear that the MQ-9 Reaper was shot down by the Russian military or its Syrian allies.

7:35 PM #Warning ? #US drone flying towards direction of the crash side now! pic.twitter.com/RNT0c48g9d

Turkey needs to look east. US is wasted.

Good for the Turks for taking advantage of being a necessary NATO asset that the US global Ziocorporate terrorists can’t afford to let go just like that given their current world “ordering” machinations going on at the moment.

Syria can’t do the same in Idlib because the Kremlin’s too worried about trade and partnership with their Western partners.

Only Germany plays a role. No other Nato country. Italy is coming closer to Russia too. Kremlin isn’t worried a bit because of that, they just have more experienced administration. KGB is working full time.

I wish, but KGB against MOSSAD? MOSSAD are the most cold blooded calculating demons in the world. They did OK City and they did 9/11 and they probably did Beirut.

And right now they are digging green cheese at the backside of the moon and next sell us very expensive flashlights.

Really? How interesting that you would believe such a thing.

So ZioAmerican just fly all over Syria anytime they want and no one sees them except the militants ? Seems odd.

Just shoot that murderous Apache chopper down and blame it on Isis.

Exactly, however you seem to be smarter then Russia, Iran, or Russia.

Told you. Revenge is coming. That was only the forplay…

Dead russian general and then this happens? Obviously it wasn’t Turkey.

US/ISIS just killed Syrian soldiers and a Russian general, a drone doesn’t seem like a fair trade there, unless it’s only an opening shot. This time I hope you’re right and it wasn’t Turkey.

It was SAA. I have no onfo on that Russian general whatsoever. Any info.

He was in charge of humanitarian effort in dier ezzor.. Remember the town is mostly destroyed and being rebuilt slowely but the US stole the oil and wont allow the people to work there or benefit from it and there are no other jobs in the middle of the desert..

I seem to recall Turkler Bashi-Bazouk elements downing a Turkler military drone earlier this year and jubilantly dancing around the wreckage as if they all just came in for the Big Win.

it may have been a surface-to-air missile (possibly a Russian one). If the speculations about the Russian missile are confirmed, it may appear that the MQ-9 Reaper was shot down by the Russian military or its Syrian allies.

It would be nice that Ameruicunts now send more “Reapers” to zoom on Russian missile system and “verify” what has happened.

This is tit for tat because of that helicopter attack.

It means absolutely nothing. We got a 1000 of them in stock and we can make another 1000 in no time.

BTW, what ever happened to the ISIS caliph and caliphate? I haven’t heard too much from them lately.

That’s when you really need to worry. S.B.D.

Production appears to be in the hundreds however, so there are many presumably, maybe several hundred by now (cf. 200 in 2016) but not many many thousands. Vulnerability issues here are important to note, however. It was not shot down by anything particularly sophisticated.

But our annual military budget is

But you are bankrupt (eye watering govt budget deficit for the year) and about to go into The Great (D)(R)epression of the 21st Century.

You really can’t afford to lose anything anymore!

Your debt (like you currency) is going to sink your boat.

You can only keep printing for so long, until you run out of ink… And confidence.

You are an indiot understanding nothing about anything.

You probatly support Iran. Lebanon and Syria, which not even has a rating or Russiahaving BBB minus.

Jens stick to your Carlsberg not economics.

He has been sucking on his Hookah too much .

Lol as they say its not the ones who vote but who does the counting that matters, and so it is with the ratings scam all run by the U.S. it wasen’t that long ago that I believe it was Fitch that came out with a rating that they didn’t like, and for all intent and purpose the government almost destroyed them.Its like all those so called polls where the count is by the way that they are taken, Regan proved how easy it was to cook the polls and the rating game is no different…

Its not a central anything. Its a private bank thats owned by a bunch of banksters and the queen of england.. The US owns no part of it other than borrowing so called money from it and paying them interest on top.

Only because it is the worlds reserve currency which has to be used for all international trade. Wait until more countries trade in their own currencies without having to buy USD and the USD will be worth less than the toilet paper it is printing on. Try living the high life when the true value hits.

more amerikan stupidity by anti-liberty—dollar is being divested by all central banks—Russia China, India,etc trade in national currencies, as do European nations—never heard of the Euro? duh

Lol being a troll is such a lonely job as the Fed buys most of those T Bills themselves because of the lack of buyers,foundations,investment groups and billionair’s wouldn’t touch them with a ten foot pole,no the Fed buys them up they are holding a few trillion with more to come….

And cars here drive with no wheels as well.

Russians and Arabistanis not even has a language for, what western Economics are and can.

They also has decided parlamentarisme is anarchy and more then one oppinion about things are not allowed.

since u rank educationally below all European nations (far below Russia)and believe sild is freedom, why would anyone believe a racist danish girl like you?…your languaf=ge is so impoverished u have no great poets or novelists—the best u can claim is Ibsen—modernist trash (sexual repression as Adorno demonstrated)

A question as stated also of vulnerability…it does not take 16 million dollar missile system to shoot down, rather something in the 16 K range…think in terms of asymmetric military logistics…another example…even more extreme are the 25 dollar katyusha type rockets that put multi-million dollar bases in Iraq on lock-down….extend the equation through time and space by multiple order of magnitude and that is the long term situation for these types of deployments….

Keep on printing the ZOGbux, twenty years from now a loaf of bread will cost $50.

If the country doesnt fall into Civil War 2.0 before then, in which case ZOGbux arent worth a wooden nickel and all the ‘power projection’ across the globe has done nothing but make enemies of most of the world, who then begin adding fuel to the fire and laughing at Americans slaughtering one another, not unlike how American patriotards thought it was a good thing about middle-easterners butchering one another in the aftermath of neocon-driven regime-change…

Not for long as the economy comes crashing down and they are busy burning America down,with some $29 trillion in the hole we are looking more like the Ukraine all the time…

and your military so incompetent, obese, stupefied, u lose all wars and produce trash—f35, osprey, Abrams tank, Thaad, etc…LOL

We lose all the wars but yet we have 1000 installations in non American counties as you said, how is that possible?

Good easy to shoot down. Hope they shoot them all down!!!

You haven’t heard much about ISIS as Russia , Iran , Hezbollah and Syria dealt to them but if you want to know how the rest are going , best phone the base camp at Al Tanf where they are in re training by their instructors.

ISIS became a wholly owned US military contractor… Before they were only a proxy and paid by 3rd party, Now they are paid with kidneys and children and human trafficking directly.. Cuts down on the paperwork..

they don’t teach your own language in your trailer park? u hear and see nothing…..

“BTW, what ever happened to the ISIS caliph and caliphate?”

Russian planes destroyed 87 thousand terrorists and 122 thousand objects for 4 years to support liberation of Syria by its army and allies. https://www.kommersant.ru/doc/4104276 Survived terrorists joined to “Hayat Tahrir ash-Sham” and other gangs. Re-branding as it was done with “Al-Qaeda” – AQ –> ISIS –> HTS.

Maybe it happened that the operator was injecting himself with the substance and the UAV crashed, no big deal, it can happen with the army of cheap losers they put up.

This is why you can’t give stupid, infantile spoiled children expensive toys.

Americans are RICH puckers… They lost over 10,000 aircraft in Vietnam and can lose another 10,000 in Syria…

Obviously 50,000 is the minimum number to lose before turning tail and running to mommey..

I paid bounties for these 2 drones—1 Honduran lempira each

Turks stroke pro-yank kurds, yanks fired back – skirmish between two gangs, as I see it.