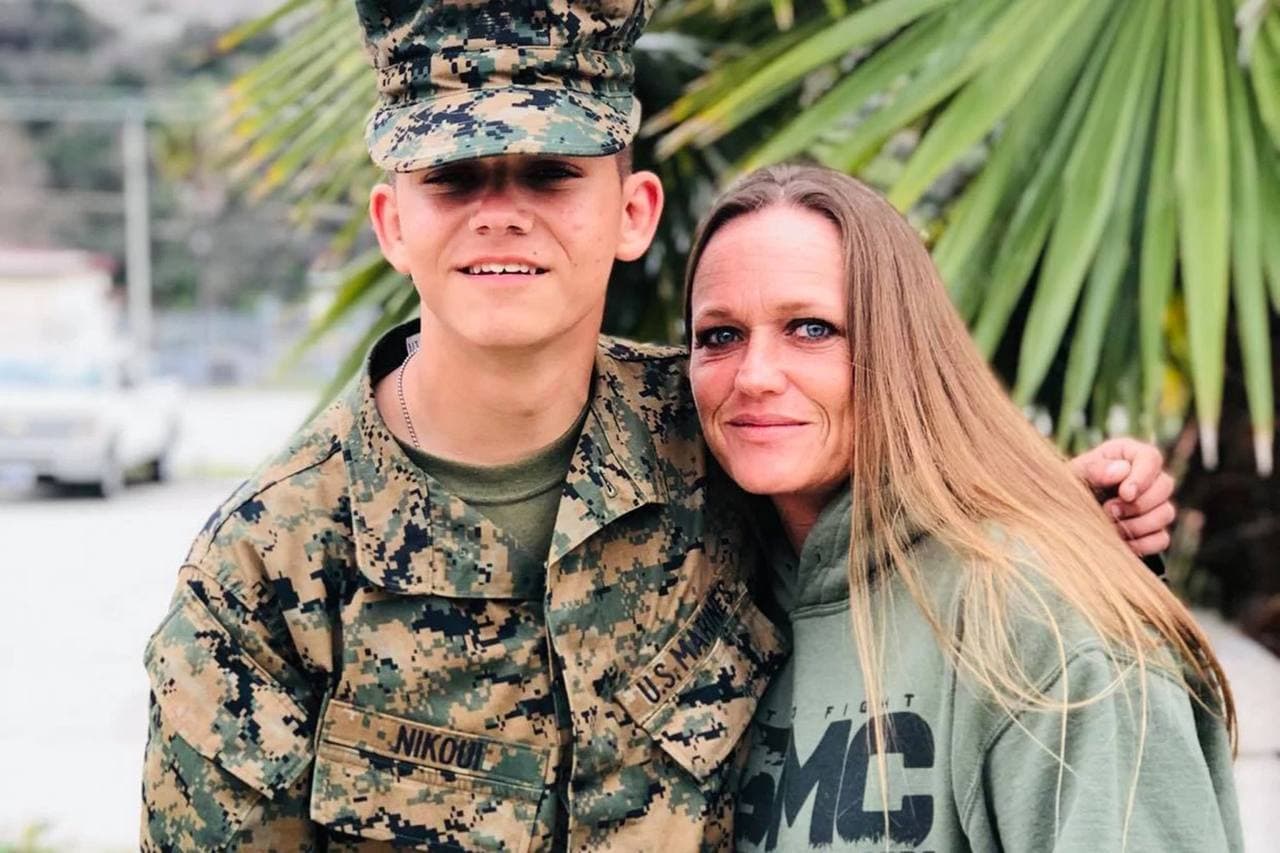 Mother of a Norco Marine killed in ISIS attack in Kabul, Afghanistan, has blasted U.S. President Joe Biden on social media. As soon as her publication gained popularity, her account was “incorrectly” deleted.

Shana Chappell is mother of Lance Cpl. Kareem M. Nikoui, 20, who died in the August 26 terrorist attack in Kabul airport. His body and the bodies of 12 other U.S. servicemen have already been delivered to the United States.

Shana’s post about the Kabul tragedy got viral on Instagram and even caught the attention of former President Donald Trump. Criticizing Biden in her post, she later claimed that her Instagram account had been deleted, “because i gained so many followers over my (son’s) death due to Biden’s negligence, ignorance and him being a traitor!”

Facebook that is notorious for its political censorship campaigns owns Instagram. The company later explained in an emailed statement that Chappell’s “tribute to her heroic son does not violate any of our policies. While the post was not removed, her account was incorrectly deleted and we have since restored it.”

On August 30, Chappell lamented Biden in Facebook, blaming the president for rolling his eyes when meeting with families of slain service members and claiming that her son’s blood is on his hands. 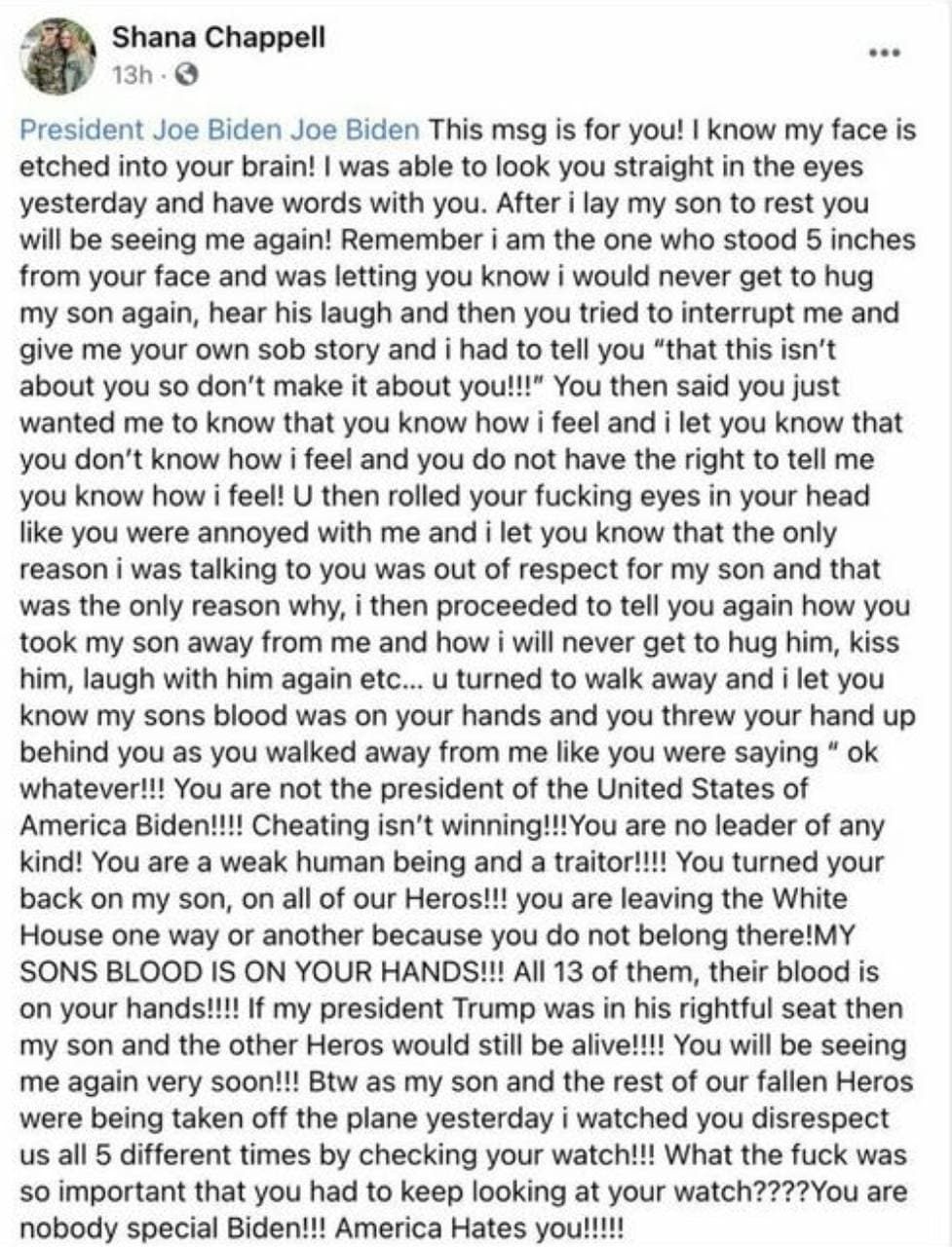 Chappell was supported by Former U.S. President Donald Trump, who wrote in his email to supporters:

“(She is) 100% correct. If I were President, your wonderful and beautiful son Kareem would be with you now, and so would the sons and daughters of others, including all of those who died in the vicious Kabul airport attack”.

“Civilians should have been brought out first, along with our $85 billion of equipment, with the Military coming out very safely after all was clear,” Trump added. “I love you, and I love Kareem.”

Biden’s Press Secretary Jen Psaki could nor avoid the question on the criticism from the grieving families.

“(Biden) is grateful to their sons and daughters, the sacrifice they made to the country. He knows firsthand what it’s like to lose a child and … no one can tell you anything or say anything (that’s) going to fill that hole that is left by that. … I will tell you, from spending a lot of time with him over the past couple of days, that he was deeply impacted by these family members who he met just two days ago. He talks about them frequently in meetings and the incredible service and sacrifice of their sons and daughters.” – Psaki claimed at the White House press briefing on August 31.

The Chappell case is another sign of the deepening social split and mounting anger in the U.S., as well as of the ineffectiveness of brazed censorship in hidding it.

AI is more intelligent than Zuckerberg

He was just a child. I hope his and the other victims’ loved ones -American or Afghanistani- find solace, although nothing in this world can make the pain of losing a child go away or ease the hardship of losing a family’s supporter.

Why should these children be there in the first place? So much death and destruction would be avoided if they weren’t there. I hope by some miracle we witness justice for perpetrators of all these needless endless wars and creators/supporters of terror groups.

I doubt if someone so young understands the impact of their actions on the world correctly and even knows that they are tools of oppression, sent to make life a living hell for people of other countries. I’ll pray for this mother, though I do not share her view that his son was a hero. In my opinion nobody in the US armed forces can claim to be a hero while they are attacking and invading the faraway lands.

Disgusting piggyback by the orange man while it is clear that he cares more about the value of the “transferred” equipment than the lives of the blast and shooting victims. Disgusting behaviour by Biden and the ZuckCorp. All of them can go to hell and make the world a better place.

What’s more is there was nothing to be gained fighting in Afghanistan, only a select handful benefitted.

Shame on you, Zuckerberg, meaning sugar hill. You are toxic pile, landfill.

There sure are a lot of Bergs with a certain hooknose lineage, they are often known for their intensive hand rubbing and beady eyes.

Psaki is a real piece of work – she actually pulled the cancer card on this one, ‘He [Biden] knows firsthand what it’s like to lose a child…’ Biden’s son died after a long period of illness and series of treatments. In contrast, this young man died abruptly, and unexpectedly for his family, aged twenty, entirely due to incompetent political decisions. And it happened as they were packing and leaving for good, making the sacrifice completely unnecessary. Context, is everything.

This is yet another nail of indictment in the deep state’s coffin.

Biden: ‘That happened days ago, days ago I said, forget about it, I already have.’