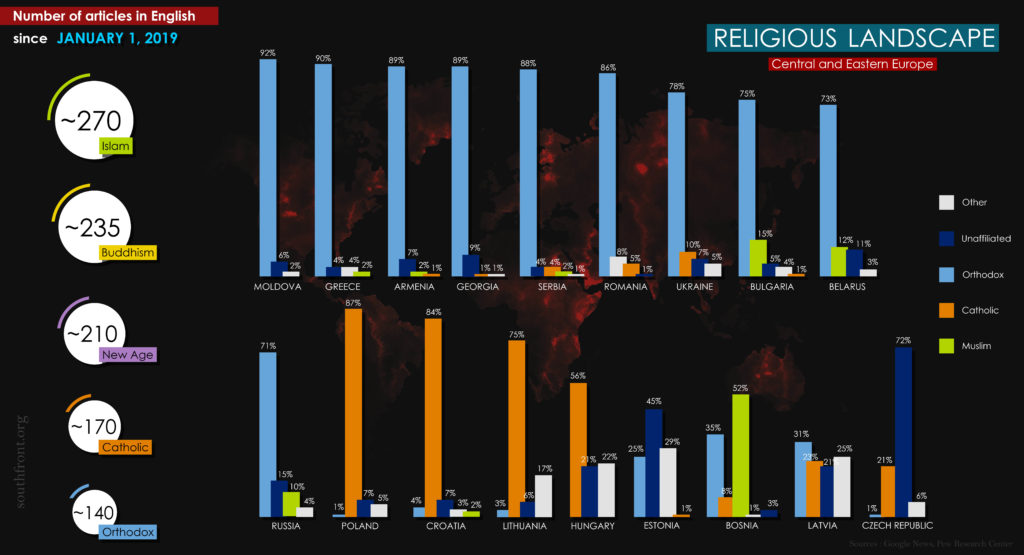 The provided infographics provides a general look at the religious landscape in Central and Eastern Europe. It’s interesting to note that exotic sects, new-age-style beliefs and other “neo-liberal” constructs especially actively challenge traditional religious systems in the states that had purportedly sold parts or all of its sovereignity to the Euro-Atlantic elites. This can be seen by especially high % of supporters of ‘other’ religions in states like Lithuania, Estonia, Latvia, Hungary, the Czech Republic, Romania and Ukraine.

The case of Ukraine is also interesting because this predominantly-Orthodox country is now turned into a hotbed of various radicals, organized crime networks, sects and sectarian-style believes. The Kiev government and its Western backers are contributing efforts against the canonical Ukrainian Orthodox Church through various non-canonical entities.

Czech Republic is nice. 3/4 of population atheists. Soviet communists were weak in Russia and Belarus.

You can call me Al
Reply to  vaderfater

I was going to slam you for your remark, but you are right. Who would have thought it ?.

but we are more and more unaffiliated than atheists, less and less space for psychopatic/pedophile religions :)

What about the Jews? They make a lot of noise and seem to be unrepresented :)

among them is the greatest number of homosexuals, pedophiles and psychopaths = the reason they are so loud :)

Greetings, the Armenian Apostolic Church is a aprt of Oriental Orthodoxy. The infographics provides a general picture. It does not divide Orthodox communions; Shia and Sunni Islam; as well as does not provide a detailed look at various believes in “others”. Sincerely yours, SF Team

Thanks for the reply.

“Despite the similar name, they are therefore a different branch of Christianity from the Eastern Orthodox.”

Not making a difference between Protestants, Jews and anything else makes no sense.

But I understand the “info-graph” did not worth the time since you had to put all your creativity in this brilliant piece:

“The case of Ukraine is also interesting because this predominantly-Orthodox country is now turned into a hotbed of various radicals, organized crime networks, sects and sectarian-style believes.”