The national intelligence agency of Israel, Mossad, has allegedly created an account it the Russian social network VKontakte in order to recruit new agents.

According to the reports, this is the only official web page of the Israeli intelligence service on the Russian social network.

We can neither confirm nor deny that this is our first tweet.

According to information on the social media account anybody who wants to “say something” is able to contact Mossad.

There is also an online form available for volunteers who want to become agents of Mossad. 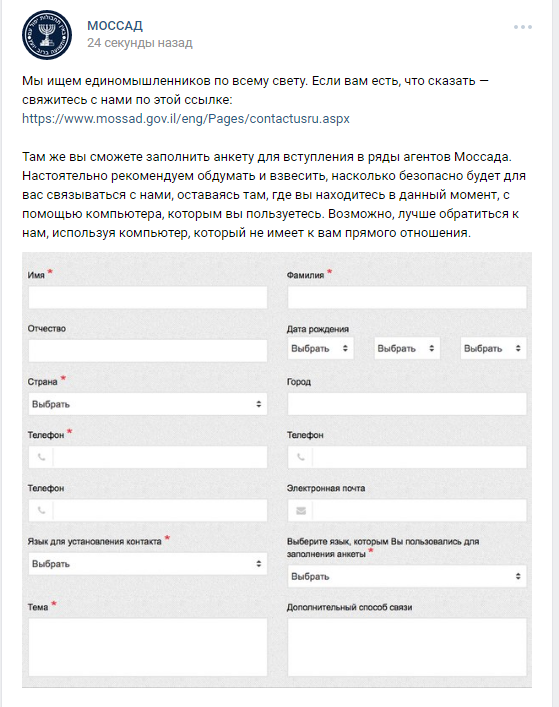 Russia should respond in kind and “urge” Hezbolah to open an account on the Israeli equivalent of Vkontakte.

Hezbollah is not an inteligence service.

No it isn’t but it will have a great inpact nevertheless.

Actually, they are a civilian volunteer militia, with a very professional intelligence wing within their department. They have good relations with allies, and are known even by Israelis to be good on their word.

You must be kidding. Mossad is specialized on TERRORISM.

Jews exterminated the Royal Family of Russia. Jews exterminated 45,000,000 indigenous Russians during the Jewish created Holodomor: https://holodomorinfo.com/ And now Jews are trying to create another World War against Russians to punish them for not being submissive Goyim and abandon Christianity in favor of the Jewish-faults-Christ coming on scene to carve out a Jewish led One World Empire in the liking’s of the UK-Empire. http://www.dailystormer.com/

The Holocaust ™ didn’t happen, but it should have.

I know that. Also, I did not say anything about the Holohoax. I said “Holodomor” go look at the website: https://holodomorinfo.com/

I know what you said, I was just getting that of my chest.

I hear Russia has a bounty on SOROS, so the Jew need only apply.

I hear Russia has a bounty on Soros, so only Zionist, Jew , Mammon worshippers need to apply.

Isn’t that what AIPAC is, hiding in plain sight. I mean really, a pledge to Israel of US citizens representatives in US goverment? What could possibly be wrong with that!