The Russian destroyer completed its tasks at the Mediterranean as part of the offensive against the Islamic State. 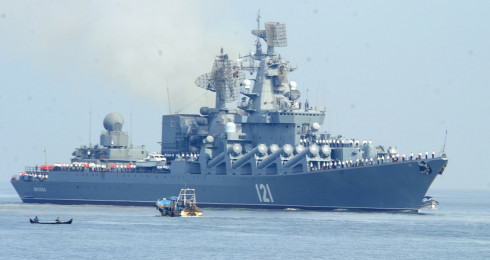 After having completed its operations on providing security for Russian Aerospace Forces in Syria, the Russian missile cruiser returned to Sevastopol, according to information released by the Russian Defense Ministry’s head of Black Sea Fleet’s Information Department on Saturday.

The cited vessel was armed with the Fort air defense system to protect the Russian aviation group taking part in the sorties against Daesh in Syria. In addition to this, Russian aircrafts were also protected with Pantsir-S1 air defense missiles and Krasukha-4 electronic warfare systems. Also S-400 Triunf air defense systems were deployed in Latakia not only to protect the airliners but also the Hmeymim base and its surrounding 600 km of airspace.

Russia started its participation in the armed conflict to fight the spread of the terrorist group in the Islamic nation since the end of last September by request of the Syrian president Bashar Al Assad.

Russian effectiveness in its sorties has been shown in its fullness by means of the deployment of a series of advanced military equipment that include Su-24M and Su-25M jets, Tu-160 and Su-34 bombers, Mi-8 and Mi-24 attack helicopters, B-237 Rostov-on- Don submarine and its Kalibr-PL missiles among others.

Ammo and fuel depots of the Islamic State have been pounded by Russian airstrikes since the beginning of the operations in Syria.

Syrian Army has launched, for the first time, a large-scale offensive against the terrorist group in more than four years of armed conflict thanks to the cooperation of Russian Forces.

It’s been reported that about 80 towns and villages have been liberated by the army of the Islamic nation and over 500 sq km of territory have been regained by the cited forces since Russian operations took place.