Russia will transfer intelligence information that will help Ankara during the Euphrates Shield operation, to Turkish military. 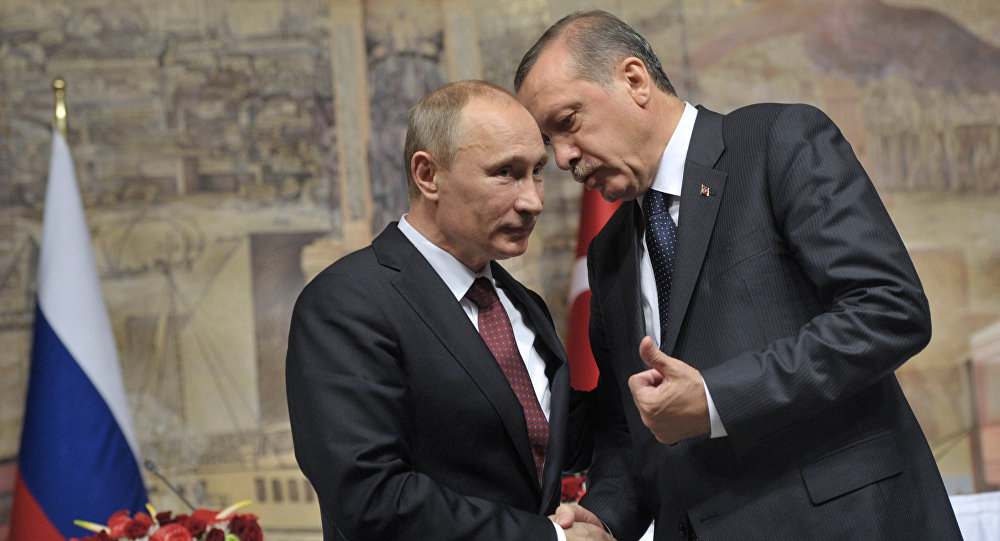 Russia has already started to transfer intelligence information, necessary for the Euphrates Shield operation, to Turkey, the Izvestiya newspaper reported, citing First Deputy Chairman of the Council of the Federation Committee on Defense and Security, Franz Klintsevich. According to the newspaper, a relevant agreement was reached during negotiations between Russian President Vladimir Putin and his Turkish counterpart Recep Tayyip Erdogan last week. Experts believe that the cooperation with Turkey on Syrian issue can bring Russia greater benefit than cooperation with the US.

According to Klintsevich, Turkey has secretly joined to the pool of intelligence sharing, created by Russia, Syria, Iraq and Iran.

“We transfer the Turkish side data of communications intelligence, electronic intelligence and imagery intelligence that may be of interest to it,” Klintsevich said. “In response, they also share information. Turks have very effective intelligence agencies and very good agents in Syria.”

As Izvestiya reported, citing its own unnamed informed military-diplomatic source, the agreement on the transfer of intelligence information was reached during the recent visit of Russian President Vladimir Putin to Turkey.

“The Russian delegation included Chief of the General Staff of the Russian Armed Forces, Viktor Gerasimov, who held talks with his Turkish counterpart Hulusi Akar,” the source said. “The sides discussed, what information, how and in what format will be provided.”

According to Klintsevich, the fact that the Turkish side has reconsidered priorities of its foreign policy after the failed coup attempt in the summer of this year promotes the cooperation between Russian and Turkish military.

“Although Turkey is a NATO country, it is very offended by the coup attempt, in which, according to some data, some of the Western powers may be indirectly involved,” Klintsevich said. “President Erdogan and the Turkish leadership have understood that they can deal with Russia.”

Still more prostitution. Has Putin been initiated into Muslim Brotherhood? I mean why not. It’s worthy of southern stream. Read this http://en.farsnews.com/newstext.aspx?nn=13950804001568. Look folks it seems Russia is behaving like a patron of Syria treating Syria as a vassal state. Putin does things even without prior consultation with Syrian military brass. That’s how it appears to be.

Well as an outsider it looks strange to me, but there is the old saying politics makes strange bedfellows! No matter what deals are cut in the end I still see only Sunni versus Shea. No matter how they slice it. I dont think this divide is bridged. Nor do the Kurds stand down from Rojava ambitions. In the end I think these will surface to win out. But then again I am just a casual observer. Its like a bad reality TV show!

the syrian war is not a simple one. it has many agendas from different interests. turkey is very important for both sides. erdogan doesn’t want to risk too much so he is playing safe by holding hands with both sides. but you have to remember that the coup was backed by the US so erdogan is and will be closer to russia. russia can’t provide turkey the economic stability that’s is being provided with the EU, nato and the US. so erdogan has to play along with the US untill they find an alternative. chosing a side would mean, erdogan will have to confront EU, nato and the US as an enemy not a partner.

I wish Putin could change Erdogan’s attitude though it is the most difficult thing to do. I personally believe only God can do it and even Him can’t do it without person’s cooperation. What worries me is Muslim Brotherhood ideology in which Erdogan has been steeped completely. It’s pretty obvious to me that he is aiming at Turkey becoming a major regional power and a patron of Islam according to Sunni tradition. Since demise of Iraq Iran has become a main contender for the same role though according to shia tradition. I see neither of them as a winner in the contest. My understanding of the outcome of the current conflict is based on Bible prophecy and I see only two powers that will dominate the world ultimately and that’s US and Vatican though for short while. The main weapon in warfare is of psychological nature and military adventures are only there to enhance it. In other words the war is to be won by deception and military is only here to facilitate it in order to make it look like a viable option. Remember neither side is able to secure victory in the conflict militarily. So what option is left?

moslems and christians are praying to the same god. they just don’t see jesus as the same god (Trinity) because god was obsessed with the idea that he is the only god. you are worshiping the same GOD !! jesus is being seen as a great prophet in islam. they don’t curse jesus and mary by saying he was a bastard and she was a whore. it is the jewish view.

so how come there is a hate between christans and moslems. was it artificially created? i would say YES !

a very good option would be to convince erdogan start talking with the kurds. not only starting it but also leading it. this could give a chance to resolve the strongest and most dangerous US proxi in that region the kurdish threat, without violence.

you should also look at other religions which are related with christianity.

“President Erdogan and the Turkish leadership have understood that they can deal with Russia” , if Putin has indeed brought Turkey over to alliance with Russia , it is a huge win for Russia and Turkey . Sharing intel is not usually a small thing . Big thing is to watch and see !