The Russian Foreign Ministry has announced that Moscow cut back the number of personnel in US diplomatic and consular missions to 455 people from September 1 and suspended the 1 US embassy’s use of property in Moscow from August 1.

“We suggest the American side should equal the number of diplomatic and technical staff working in the US Embassy to Moscow and the consulates general in St. Petersburg, Yekaterinburg and Vladivostok to the exact number of Russian diplomats and technical staff members working in the US before September 1,” the foreign ministry said in a statement at its website. “This means that the total number of the staff engaged in US diplomatic and consular establishments will be reduced to 455 people.”

Russia also suspended the use of all the warehouses and the property in Moscow by the US Embassy as of August 1.

Deputy Foreign Minister Sergei Ryabkov that Russia is not ruling out any steps in retaliation to US sanctions. Ryabkov added that Russia’s measures are not limited to the reduced number of US diplomatic staff and the seizure of US diplomatic property in Moscow.

Aaaaa… the old, white haired, racist and stuck in the 60s mccain and friends trying soooooo hard to derail trumps attempt to work with russia… but mccain will die of a horrible brain tumor very soon and i hope its slow and very painful. Also his old buddies will follow suit. This country needs fresh young minds in congress and senate not all these old warmongering mummies running the show creating havic atound the world

Perhaps someone will emerge who will offer you hope and change.

The trouble is, to qualify for congress you have to be an old warmongering mummy, take Israel first oaths and generally be a despicable person. The situation is so far beyond hope it’s not funny any more. Change will not come from congress.

Yeah, that will be vsry difficult as there is another, more powerful government running the show behind the placeholder that is the president. ANY president…

Yep!!! that government is the COUNCIL ON FOREIGN RELATIONS.

Tit-for-Tat… Hate this kind of “kitchen scandals” in diplomatic relations but there was no choice. Russia basically gave US all the time on Earth to rethink their actions but those guys are hopeless.

And the most funny thing is that instead of 35 diplomats (which will be tit-for-tat), Russians are booting out around of 600 diplomatic workers from United States of North America.

Agree that 35 vs 600 is not really tit-for-tat :) but do you agree that Russians were not on a hurry with retaliation measures? Do you think that Russia’s answer is too harsh and not fair?

Nah, they waited a long time and gave it a try. The US is so wide open to getting kicked where it doesn´t want that now and running around so blindly making edicts and wrecking stuff, it is going to go hard for us in the US. A very big shock is OTW. My take on it Tudor.

Thanks for sharing. May I ask… what is OTW?

Hi Tudor. OTW is a computer gamer term, it equals ‘on the way’. For instance, in one conversation in public chat I was watching in Battle Pirates, one player threatened another player, advising him his fleet was otw to his base, to adminster a butt kicking. A more common expression which means exactly the same is ‘ it’s coming ‘. A great weekend to you.

Thanks John,
I see now – this is similar to BTW, I should have guessed :) Sorry for my self tought English.
I will tell you one thing… It’s actually not about US. US is ruled just the same as its sphere of influence. Its just US is used as power center but there are rumors that gp is about to shift it to new location and Tramp is there to reformat US. Its actually not about Russia nor USA or any other country. It’s about us Humans vs GP.
How’s that for a crazy Russian theory? :)

Have a great day on your side of this beautiful planet.

US stop being crazy! 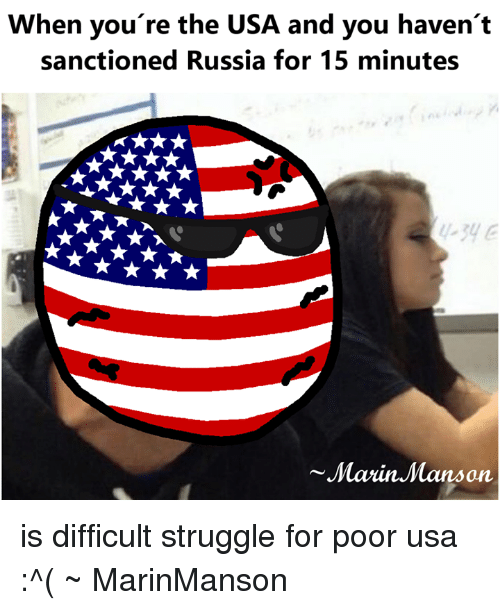 Definition of Congress: The exact opposite of Progress…

455 diplomats seems like a lot to me. What exactly do they do? My answer
is that they are up to no good. Do you have a better answer ?

Most of the are spies

What wit will happen if the US has no more spies on Russia they will need to start asking their allies whom they also are alienating. The US Congress is where the ignorant arrogant flagrant belligerent people meet regularly to discuss matters most know very little about. The swamp is Congress and US citizens are the only ones capable of dealing with it. The so called house of sober thought has been drinking the spiked Kool Aid and some are being like high school kids by spiking it even more .

I wish i could think like grand admiral thrawn from star wars all the time, in situations like this, where getting angry or emotional doesnt do much to defeat or outsmart your opponent, but rather, his calculating and brilliant tactics :)))