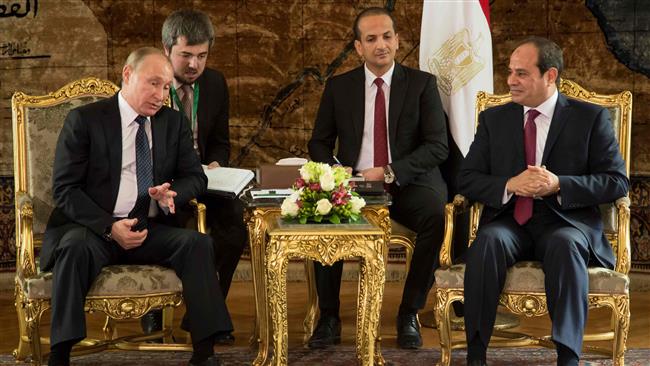 Russian President Vladimir Putin (L) speaks with his Egyptian counterpart Abdel Fattah el-Sisi prior to their meeting in Cairo on December 11, 2017. (Photo by AFP)

On December 11, Moscow and Cairo signed a deal to build the first ever nuclear power plant in Egypt. The deal was made during a visit of Russia’s Vladimir Putin to Cairo where the Russian president met with Egyptian President Abdel Fattah el-Sisi.

The nuclear power plant will be located in the city of Dabaa, on the Mediterranean coast, in about 130 km northwest of Cairo. The plant will include four 1,200-megawatt nuclear reactors. It is due to be completed in 2022 and possibly generate power in 2024. According to media reports, the construction cost will be about 30 billion USD.

The deal was signed by Alexei Likhachev, the head of Russian state nuclear company Rosatom, and Electricity and Renewable Energy Minister of Egypt Mohamed Shaker.

They need it for cheap desalinated water, especially since their neighbours are building a dam that will cut the currently available.

That’s a very good investment for Russia. I hear they financed it by %85 of whole as state loan with a repayment period of 13 years with annual interest of %3.

It’s also beneficial for Egypt, as they cannot build more hydro electric plants. Perhaps if they invested in their natural gas it would be cheaper but I think Egypt needs to export it and not burn it themselves. Let’s hope solar power gets more efficient and cheaper for countries like Egypt with their vast amount of empty sunny deserts. We started to build a few, I’ll let you know if they turned out to be OK! ;)

It’s not so much about energy as it’s about providing living space for the population. Dabaa is surrounded by desert and it’s far from the Nile, but once they finally get NPP it will become a blooming oasis of affordable power, housing and WATER. Solar/gas generators just wouldn’t pull it off.

Is Israel preparing to bomb this nuclear plant ? That would be a very big mistake ! Russia will not think twice to attack Israel DIMONA.

The carrot usually works better than the stick.

Fission / fusion reactors. the best in the world, much more efficient than USA which is why everyone is going to Russia for these plants! Russia has a higher Fusion rate than USA by ore than 12% which makes them so much more economical! It means it needs much less nuclear fuel. Nuclear power plants are much smaller these days too!

if yoz have fusion reactor, you are great! :))

fision/ fusion hybrid! look it up!

READ! they are far more efficient and have almost no nuclear waste!

they can create fusion now, but it does not output enough energy! only enough to run itself! But using fusion to create fuel for fusion reactor! This means u can use ANY uranium! it does not have to be enriched! Means more energy, less nuclear waste, low radiation and much, much smaller reactors!

Russia makes the best!Even better than the USA! Russia tends to lead in both Rocket engine and Nuclear technology!

You should post a picture of urself on ur knees bowing to the Russian flag! that will allow u to be forgiven!

Once again, Putin is outmanoeuvering the AngloZionist Empire that is in decline & rapidly losing influence in the region & around the world. It is Trump’s way of making Merica great again.