Saudi aerial assaults caused most of casualties, according to medical officers.

It is reported that more than 57 people are killed today, as pro-Saudi militants battle Houthi fighters and Yemeni army forces to capture Yemen’s third biggest city of Ta’izz.

According to military sources, in Friday clashes which involved airstrikes by Saudi warplanes, 37 members of the Yemeni army and their allied Houthi fighters and six civilians were killed. Sources also said that fourteen militants loyal to former president Abd Rabbuh Mansur Hadi were also killed.

Saudi aerial assaults caused most of casualties, according to medical officers.

It is also reported that Ta’izz governor Ali al-Maamari said pro-Hadi forces captured areas in the western and southern suburbs of Ta’izz, including the al-Misrakh district.

However, Ta’izz- widely known as Yemen’s cultural center, has been under the control of Houthi fighters and allied army forces for over a year now. 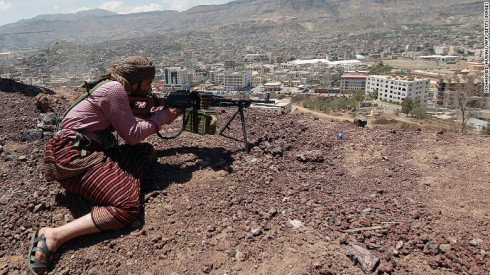