Militants in six more Syrian towns laid down their arms and signed a peace agreement with the Syrian government during the last 24 hours. 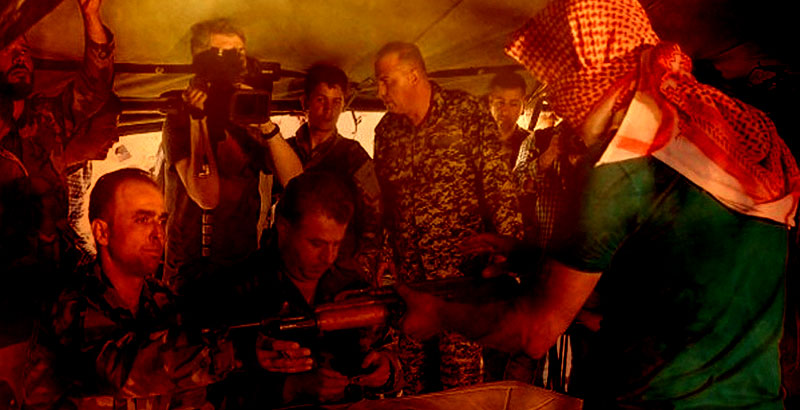 During the last 24 hours, militants in six more Syrian towns laid down their arms and signed a peace agreement with the country’s government, the Russian centre for reconciliation of opposing sides in Syria reported on Saturday.

“Representatives of militants in six more towns have inked the nationwide peace agreement with the Syrian army in the last 24 hours,” a statement of the centre reads. “The total number of cities, towns and villages that have thus far joined the national reconciliation plan now stands at 1018.”

On Friday, the Russian centre for reconciliation of opposing sides in Syria also announced that about 2,000 terrorists laid down their arms in Khan al-Shih town, located 15 kilometers from Damascus.

According to reports, the town of Khan al-Shih was surrendered by terrorists of the Jabhat Fateh al-Sham (previously known as the al-Nusra Front), Ahrar al-Sham and Saif Al-Sham groups. They went to talks and handed over to the government forces two tanks, two infantry combat vehicles, four anti-aircraft guns, three Dragon anti-tank missile systems and more than 400 pieces of small arms.

Reportedly, 3,010 people were transferred from Khan al-Shih to Idlib by busses, including 1,846 terrorists and 1,164 members of their families.

Not only Khan al-Shih came under the full control of the Syrian authorities, but also 13 settlements in its surrounding area in the south-west of Damascus.

I doubt that this number of 1018 settlements is true. If you number the settlements said to have joined to the reconciliation in Latakia Governorate only, you should conclude that all the Latakia Governorate is liberated already, but it is not, there isn’t even a little change on the map for months. And I bet that tomorrow they’ll say that some more settlements from Latakia have joined the reconciliation plan, and the day after again, and again and again… How many villages and towns are there in the little most northern part of Latakia, which is under terrorists control? Millions? Someone would think that Latakia is some big country! And I don’t understand why the Russians are telling such no sense informations? I don’t get it, what’s the point??? Or maybe reconciliated doesn’t mean liberated? But in that case what does it mean? Even in that case, even if it is not supposed to be noticeable on the map, there are too often (almost every day) reports that some settlements from Latakia have joined the reconciliation plan. One can hardly make a sense out of this. If somebody can help me with this I would be very grateful to him/her.

My read is the 1018 is for the entire country. Why do you feel the number is only for the Latakia governorate?

The best and most likely original version is found on TASS’s website. The Russian military updates the list daily.

Yes, you’re right, here it is: http://tass.com/world/916563 Like I said, 2 of the 6 towns which have signed reconciliation agreements are from Latakia, and like I guessed, in the latest report there are two more towns from Latakia: http://tass.com/politics/916658 So it is 4 towns for only 2 days from the province of Latakia. You can check the previous reports, almost all of them include one or two newly signed reconciliation agreements with some (unfortunately unknown) towns from Latakia. If you count them all I bet that at least a quarter of the total 1018 (~250) will be found to be from Latakia (and the number is still rising), and there are no more than 50 towns and villages in the Latakia Governorate under terrorists control, for sure. And don’t forget that there are towns from Latakia which for sure aren’t reconciliated and are witness of constant fighting, for example Kobane, and also not all the towns (which are no more than 50) are on the frontline, but are deeper in the terrorist controlled territory. Does it makes sense to you? It does not to me. That’s why I’m asking for an explanation, if there is any.

You know something…I don’t believe any numbers or take them literally or bother to research them… numbers are meaningless. The only number that counts is the date on which all of Syria is with the legit government again. Officially, and no more warfare. Until then its all propaganda from every side…

Not sure I can explain the numbers but here is the Russian official website: http://syria.mil.ru/en/index/syria/news/more.htm?id=12079277@egNews

You can look up the daily bulletins here: http://syria.mil.ru/en/index/syria/reconciliation_bulletin.htm

A month ago, (Nov. 3) it was reported that there were 900 towns that had signed a reconciliation agreement.

If you figure it out please post your findings.