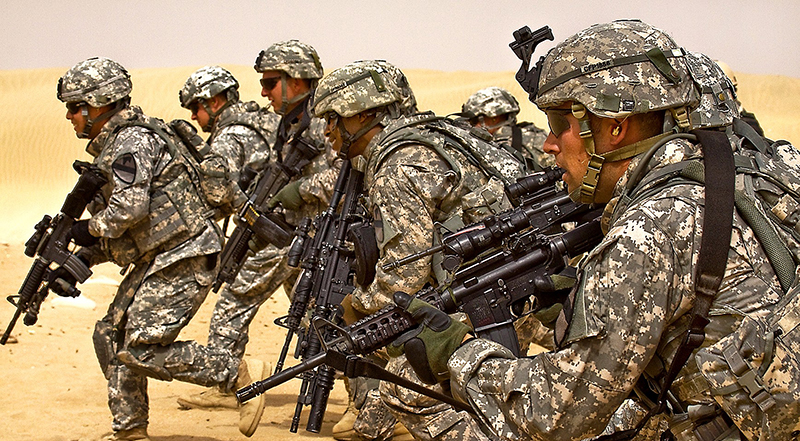 WASHINGTON — As American intelligence agencies grapple with the expansion of the Islamic State beyond its headquarters in Syria, the Pentagon has proposed a new plan to the White House to build up a string of military bases in Africa, Southwest Asia and the Middle East.

The bases could be used for collecting intelligence and carrying out strikes against the terrorist group’s far-flung affiliates.

The growth of the Islamic State’s franchises — at least eight militant groups have pledged loyalty to the network’s leaders so far — has forced a debate within the Obama administration about how to distinguish between the affiliates that pose the most immediate threat to the United States and Europe and others that are more regionally focused. The regional groups, some officials say, may have opportunistically adopted the Islamic State’s brand to bolster their local clout and global stature.

In the midst of that debate, senior military officials have told the White House that the network of bases would serve as hubs for Special Operations troops and intelligence operatives who would conduct counterterrorism missions for the foreseeable future. The plan would all but ensure what Pentagon officials call an “enduring” American military presence in some of the world’s most volatile regions.

Administration officials said that the proposal for the new basing system, presented to the White House this fall by Gen. Martin E. Dempsey during his final days as chairman of the Joint Chiefs of Staff, was not intended to be a specific Pentagon proposal to combat the affiliates of the Islamic State, also known as ISIS or ISIL. The officials said that it was meant primarily as a re-examination of how the military positions itself for future counterterrorism missions, but that the growing concern about a metastasizing Islamic State threat has lent new urgency to the discussions.

The White House declined to comment about continuing internal deliberations. The plan has met with some resistance from State Department officials concerned about a more permanent military presence across Africa and the Middle East, according to American officials familiar with the discussion. Career diplomats have long warned about the creeping militarization of American foreign policy as the Pentagon has forged new relationships with foreign governments eager for military aid.

Officials said the proposal has been under discussion for some time, including this week during a White House meeting with some members of President Obama’s cabinet. Shortly after General Dempsey retired in September, Defense Secretary Ashton B. Carter referred to the plan in a little-noticed speech in Washington. “Because we cannot predict the future, these regional nodes — from Morón, Spain, to Jalalabad, Afghanistan — will provide forward presence to respond to a range of crises, terrorist and other kinds,” Mr. Carter said. “These will enable unilateral crisis response, counterterror operations, or strikes on high-value targets.”

Pentagon planners do not see the new approach as particularly costly by military standards. One official estimated it could be in the “low millions of dollars,” mainly to pay for military personnel, equipment and some base improvements.

For the approach to have any chance of success, analysts said, regional American commanders, diplomats and spies will have to work closely together and with Washington — something that does not always happen now — to combat threats that honor no borders. “You can’t just leave this on cruise control,” said Vikram J. Singh, a former official at the Pentagon and State Department who is now vice president for national security and international policy at the Center for American Progress.

Officials said that the Pentagon’s proposed new architecture of bases would include four “hubs” — including expanding existing bases in Djibouti and Afghanistan — and smaller “spokes,” or more basic installations, in countries that could include Niger and Cameroon, where the United States now carries out unarmed surveillance drone missions, or will soon.

The hubs would range in size from about 500 American troops to 5,000 personnel, and the likely cost would be “several million dollars” a year, mostly in personnel expenses, Pentagon officials said. They would also require the approval of the host nation.

The military already has much of the basing in place to carry out an expansion. Over the past dozen years, the Pentagon has turned what was once a decrepit French Foreign Legion base in Djibouti, in the Horn of Africa, into a sprawling headquarters housing 2,000 American troops for military operations in East Africa and Yemen.

Similarly, the American military has been using a constellation of airstrips in Africa, including Ethiopia and Burkina Faso, for surveillance missions flown by drones or turboprop planes designed to look like civilian aircraft, to collect intelligence about militant groups across the northern part of the continent.

The Pentagon plan also calls for a hub in the Middle East, possibly Erbil, in northern Iraq, where many of the 3,500 American troops in Iraq are based.

The new approach would try to bring an ad hoc series of existing bases into one coherent system that would be able to confront regional threats from the Islamic State, Al Qaeda or other terrorist groups — including possible attacks against American embassies, like the assault on the diplomatic compound in Benghazi, Libya, in 2012. It would also ensure that the bases would receive regular financing in the annual Pentagon budget and it could lengthen — and make more predictable — troop deployments, especially among Special Operations forces who often rotate assignments every several months.

A senior Pentagon official said the proposal was still very much in its early stages, with some officials advocating a larger string of new bases in West Africa, and others, mindful of African fears about a large American military footprint on the continent, saying the main hub for West Africa would actually be located in southern Europe. Any American bases in Africa, American officials said, might have approximately 500 soldiers.

The size of the bases will most likely depend on the regional threat. American officials said intelligence was still murky on how the various affiliates are tied to the Islamic State leadership, and there are some disagreements between spy agencies.

For instance, American officials said that the intelligence agencies were generally unanimous in their view that the Islamic State affiliate in Libya and some of the other franchises had strong ties to the group’s leaders in the Islamic State’s self-declared caliphate in Syria and Iraq, and that they had a desire to carry out its agenda of attacking the West.

But there is greater uncertainty about groups like Boko Haram, a Nigerian-based Islamic militancy responsible for years of destruction in north-central Africa. The group announced its allegiance to the Islamic State this year, but American officials have given conflicting statements about the strength of Boko Haram’s bonds to the Islamic State’s top leadership.

Gen. Joseph E. Dunford Jr., who took over in October from General Dempsey as chairman of the Joint Chiefs, told Congress this month that he saw little to distinguish among the Islamic State affiliates. He said that the Islamic State’s inclusion of Boko Haram and other militant groups into its fold was part of a “global dynamic.”

“These threats are difficult to confine to one place,” he said, adding that was why the United States needed to strike at the Islamic State not only in Iraq and Syria but also in “other places where it is.”

But Gen. David M. Rodriguez, commander of the Pentagon’s Africa Command, said around the same time that he did not see strong ties between the Islamic State and Boko Haram, which he indicated still saw itself as a regionally focused group.

One American intelligence official, speaking on condition of anonymity because he was discussing classified assessments about the various groups, said that the Islamic State “does not vet the new affiliates” with the same scrutiny that Al Qaeda does, and generally welcomes any opportunities to build its global brand.

The affiliates, the official said, are a mélange of different identities and agendas — and some might not be “completely subsumed” into the Islamic State.

While he said that some groups were the result of active efforts by the Islamic State to expand its global presence, others like Boko Haram and the Islamic State branch in the Sinai Peninsula were products of local circumstances and were seeking to exploit the group’s resources and prominence.

They are flying the Islamic State flag, he said, “in an attempt to elevate their cause.”

The US want to be in Africa only because China is investing heavily there.

very good. 5000 troops means 5*10^8 usd annually only for salaries. and the same operating costs. this will stretch the US budget. in 5 years they go bust (unless they steal oil somewhere) and their enemy must not fire a single shot.