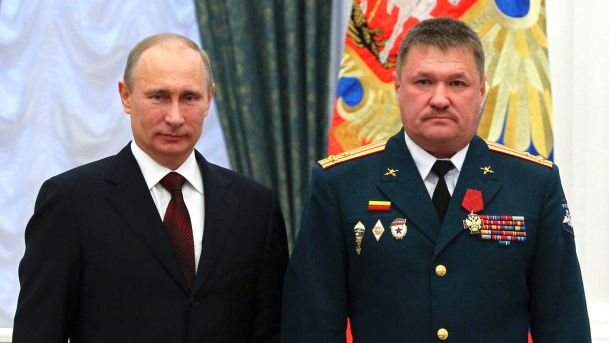 FILE PHOTO: Valery Asapov, right, who was killed in Syria, poses for a photo with Russian President Vladimir Putin in Moscow, Russia in 2013. Source: Mikhail Klimentyev/AP

Russian Lieutenant General Valery Asapov died as a result of ISIS shelling near Deir Ezzor on Septermber 23. He was 51 years old.

Asapov was at the Syrian checkpoint when it was bombarded by ISIS forces. Ministry of Defence of the Russian Federation reports that Lieutenant General Asapov was helping the Syrian forces command the Deir ez-Zor liberation campaign, when he had been lethally wounded in a sudden ISIS attack.

During the 1990s, Asapov took part in restoring order in Chechnya. In 1995 he was an executive officer of a battalion at Grozny, where he was wounded in the leg. Later in Abkhazia he served in the peacekeeping troops, and after that back in Russia commanded a motorized rifle brigade in Eastern Military District.

The Ministry of Defence of Ukraine argues that in March 2016 he allegedly commanded the 1st Army Corps of the Donetsk People’s Republic (DPR) in eastern Ukraine. However, no proofs have been provided so far. 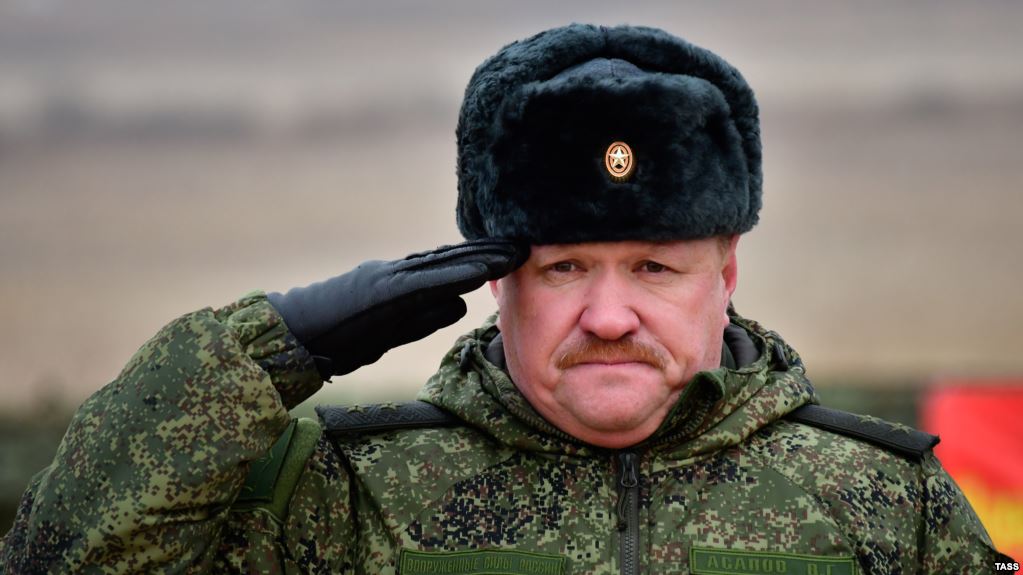 In Syria, he worked with the 5th Assault Corps of the Syrian Army. It’s one the main strike units of pro-government forces in Deir Ezzor city. It participated in clearing the road to the city, and then crossed the Euphrates River to its eastern bank where the majority of oil and gas infrastructure is situated.

“High prestige combined with care were outstanding features of his work,” Russia’s chief of general staff Valery Gerasimov said on Wednesday. “He worked as the chief of staff of the group of our forces and then was in command of the Fifth Corps of volunteers … A treacherous shell cut short his life.”

The Russian pro-opposition media outlet RBC allegedly reached a “close friend” of Asapov. According to him, the Lieutenant General was known to always try minimizing the amount of casualties of government forces troops during his service in Syria. The report also blamed the Syrian Intelligence Service for a low quality of the work on the ground that could create preconditions for Asapov’s death.

RBC also reached the Arm Export magazine editor-in-chief Andrei Frolov . Frolov believes that the casualties are growing because of a high speed of the operation in Deir Ezzor.

“The volume and intensity of firefights increase”, Frolov told to RBC. “Apart from Russian Aerospace Forces in the air, Russian military personnel help and consult the Syrian troops on the ground. Hence more general officers in the region, and consequently the chance of them dying increases,” he added.

According to the Russian Ministry of Defence, Lieutenant General Asapov is the 38th Russian soldier to die in Syria. They estimate that Deir Ezzor city will be liberated soon. Now the city is 85% under Syrian control.

Stop believing yankee fairytales: War is a bitch and real soldiers (not Murican officers) die in them. The Russian generals have the balls to go to the battlefield. It’s great to lead by example and know the terrain, death is just a risk you take. Respect to this great soldier. RIP

If you work in a bakery you get covered in flour.

Our press is trying to make it sound like Mattis got in a gun battle w/the Taliban because they shelled the airport hours after he arrived and they are saying ‘he escaped’. No one died in the airport, just one civilian because his home near the airport was hit, presumably by accident.

Let’s not forget the civilians who were killed in the ‘counter-attack’.

We are buffoons. We play into the hands of the Taliban launching a revenge attack and Mattis makes a speech about the sanctity of International airports while endorsing Israel’s regular attacks on Damascus. U.S. loses in Afghanistan. This settles it for me unless giving it to the Taliban is our goal.

Yes there are going to be losses no matter what, RIP.

Just a bit more of a “Bitch” if the US is supplying information to ISIL on where and when to shell. . .

I too initially thought the coordinates were passed on, but in light of the revelations that US operatives seem completely comfortable in daesh held areas, my money is now on the bet that it was actually US SO forces directly operating form daesh territory. Perfect deniability, if their “comfort” is not know about.

Google is paying 97$ per hour,with weekly payouts.You can also avail this. On tuesday I got a brand new Land Rover Range Rover from having earned $11752 this last four weeks..with-out any doubt it’s the most-comfortable job I have ever done .. It sounds unbelievable but you wont forgive yourself if you don’t check it !si290d: ➽➽ ➽➽;➽➽ http://GoogleLegitimateProductsJobsFromHomeJobs/get/hourly… ★✫★★✫★✫★★✫★✫★★✫★✫★★✫★✫★★✫★✫★★✫★✫★★✫★✫★★✫★✫★★✫★✫★★✫★✫:::::!sv120l..,….

Hi Petrus….Your point is understood, however 3 star generals do not grow on trees, (except of course, US, Pentagon-based, desk job ones). Just recently, in that same area, we saw the death of Syria’s Brig. Gen. Zahreddine who led in the fight to retake Deir Ezzor. There have been other Syrian, high level deaths there as well, which leaves one to think that at least some of these people were specifically targeted. Their ‘needless’ exposure to danger does not serve the greater interest of the military.

Rest in peace general… Condolences to the family. With respect, from Iran.

The IRGC also puts its officers on the front line, don’t want to talk about my country’s military. We used to be a nice, little country.

I’ve visited (never in the military) to West Point where our officers are trained, a beautiful place, on a bend in the Hudson River, it was an operational fort during the Revolutionary War used to block the British navy (that’s why it was on a bend). Success plants the seeds of destruction.

It was also a British Fort and intended to keep the french from coming upriver.

Sun re O ! (Rest in perfect peace). General Valer, you are my hero. With love from Nigeria.

Didn’t the US have the GPS location of where the Russian General was?

And doesn’t the US have GPS guided shells for artilliary? (or Saudi Arabia for that matter. . .)

And doesn’t the US back the Kurds who were within firing range of where that General was killed?

And. Given that the US keeps on evacuating ISIL commanders from areas close to Dier Azor, is it possible that the US (or Saudi Arabia) supplied a couple of those GPS guided munitions to ISIL? Like all those ATGM’s that they have provided to ISIL over the years. . .

Definitely a a target because of his invaluable leadership which is rarely seen today among Western Generals.

This is not going to end well for any American that helped with the murder. . .

RIP to a brave man. Russian’s fight like real men, this general was at the frontlines and not hiding behind a NATO desk and sponsoring terrorists.

I think SAA has traitors in their officers they give info and Americans give tactics to ISS ,so on.

Probably looking at the guy who failed to shake Issam Zahredine as a likely suspect.