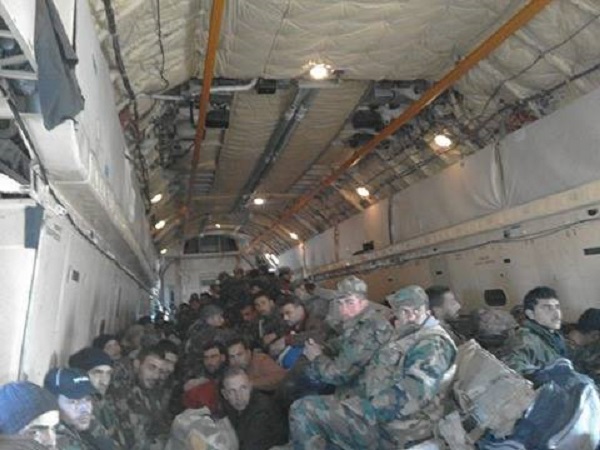 Syrian troops are heading to Deir Ezzor via plane

By Valentin Vasilescu; Translated by Alice Decker; Submited via Algora Blog following this article at SF

On December 9, 2016, columns of Islamic State armored cars left the city of Mosul and crossed the border into Syria.IS fighters launched a fierce offensive on the Syrian army garrison in Palmyra and conquered the city.The IS had 4,000 fighters in this operation, who came via Toyota pickup trucks equipped with machine guns, armored vehicles, artillery and tanks.On January 14, 2017, part of the IS group in the area of Palmyra traveled 100 km east to join the Islamic State group attacking the city of Deir ez-Zor.In a few days, the 7,000 IS fighters managed to break in two the defensive formation of the Syrian army at Deir ez-Zor. 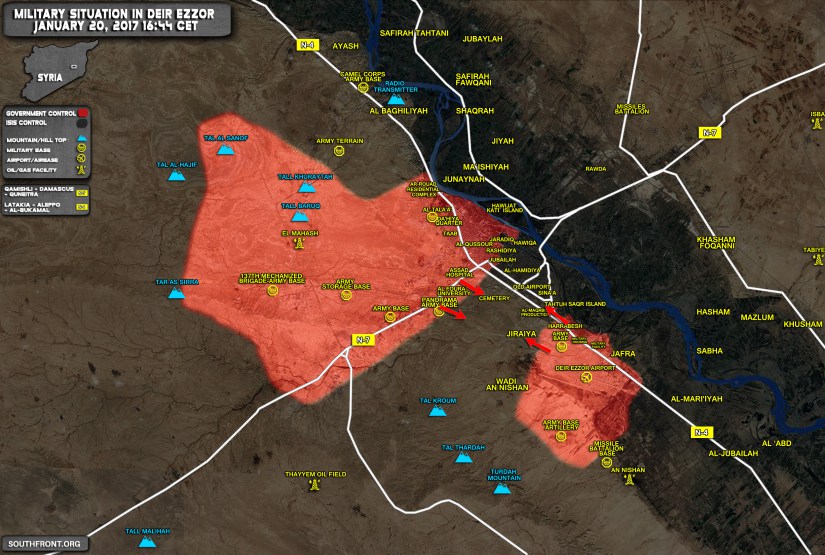 The situation became critical for the defenders of Deir ez-Zor and Russian aircraft operating from the Hmeymim base executed 80–100 missions a day to stop the Islamic State attacks.Even so, the Syrian army headquarters decided it was necessary to supplement the military contingent fighting in the Deir ez-Zor encirclement. It was not possible to land Syrian transport planes at the Deir ez-Zor airport, as they would be vulnerable to MANPADS (Man-portable air-defense system)and to machine-gun fire from the terrorists, especially during take-off and landing, and while taxiing.Therefore it was decided to send only soldiers, without arms and munitions, by transport helicopters.

The first group of Syrian soldiers was delivered on January 23 to Qamishli in Hasakeh governorate (in northeastern Syria), using four Il-76 military aircraft. Qamishli Airport, with its runway of 3,615 x 46m and its aerial navigation protection systems, is guarded by members of Regiment 154 of the Syrian army. One risk factor was the fact that Hasakeh governorate is controlled almost entirely by the armed wing of the Kurdish Democratic Union Party (YPG), supervised by US military instructors. Qamishli Airport is 50 km northwest of Rmelan, where three security platoons (100 men) of the US 101st Airborne were deployed on January 19, 2016. The US military has set up a 700m-long runway and a platform that is occasionally used by several MH-60 helicopters and MV-22 tilt-rotor aircraft. These US aircraft are used in the fight against IS in Syria’s Raqaa governorate and in the siege against Mosul in Iraq.

On the night of 23/24 January, at Qamishli Airport, the Syrian military group was transferred aboard 20 Russian-made Syrian Mi-8/17 helicopters.TwootherMi-8/17 helicopters were held in reserve and took off after the first 20 to execute search and rescue missions, if necessary.Many of the helicopters had experienced Russian crews. The helicopters took off four or five at a time, in formation, and maintained a distance of 4 km between formations.Flying over territory occupied by the Islamic State, their flight path bypassed all locations under terrorist control. The 250km flight path included several changes of direction to avoid giving away what was the final destination. En route Qamishli–Deir ez-Zor, none of the helicopters used its position lights and they did not descend below the altitude of 2,500 m.The formations of Mi-8/17 helicopters were tracked by Russian military air traffic controllers and were displayed on the Syrian army’s radar screens.It is assumed that an Il-20M1 ELINT may also have been flying in the airspace over eastern Syria, monitoring these formations and other aircraft in the area. TheIlyushin-20M1 is equipped with Kvalat-2 radar, which can spot aircraft and land vehicles up to a distance of 300 km.Since the Mi-8/17 helicopters’ flight path was intersected by the bombing routes used by the anti-Islamic State terrorist coalition led by the US, twoRussianSu-35 fighters gave them air cover.

One of defensive measures used to secure the landing area was, again, the Russian Su-25 close air support jet. Located in the service area above Deir ez-Zor, their primary mission was to strike Islamic State terrorists approaching the landing zone.In the event that one of theMi-8 transport helicopters was shot down or damaged,the mission of the Russian bombers was to provide air cover to the two reserve helicopters that would conduct the search and rescue operation.Other support missions over the Deir ez-Zor air base were executed by Russian reconnaissance drones.They monitored the landing procedure of all the helicopters from a high altitude.Through images transmitted in real time, the mission coordinator at the headquarters of the Hmeymim air base had a complete picture, and so was ready to intervene in case of any special situation.

The Mi-8/17 helicopters made a steep descent from 2,500 m, flying in close circles above Deir ez-Zor airbase, covered by Syrian soldiers. The helicopter crews had night vision equipment and the Deir ez-Zor air base had Russian laser equipment.They marked rectangles to indicate the landing sites for the Russian helicopters.The laser beam was invisible to the IS terrorists but was visible from the air, using the crews’ night vision equipment on the Mi-8/17 helicopters.The helicopters were on the ground for 30–50 seconds to land the ground troops.

The detachment that was thus transported by the Mi-8/17 helicopters was made up of about 500 Syrian soldiers, in other words a tank battalion from Brigade153 / Division 1 Tanks (minus their tanks) and two companies of special ops forces (minus weapons and ammunition). The defense formation at Deir ez-Zor comprises 4,000 to 5,000 soldiers.They belong to the T137 Mechanized Brigade (BMP-1 IFV, T-72, T-55 tanks, and the ZSU-23-4 Shilka — a lightly armored self-propelled weapons system), the 104 Airborne Brigade, 121 Artillery Regiment (M-46 Field Gun, D-30 howitzers, BM-21 Grad MRLS-multiple rocket launchers) and reservists from the national defense forces.

Those defending Deir ez-Zor had the advantage of large stocks of arms and ammunition. Deir ez-Zor was the headquarters of the 17 Mechanized Division that was just formed for this war and was meant to defend northeastern Syria. The 93 Tank Brigade (100 T-55 tanks and 40 BMP-1 IFV) and Special Operations Forces Brigade 154 had battle equipment stored in depots in Deir ez-Zor but not the men to use it.

As a result of this move to increase the fighting forces, Syrian soldiers were able to execute a successful counter-attack and restore the connection between the two formations to the north and to the south of the city of Deir Ez-Zor. [SF editor: This is NOT confirmed. However, the Syrian military is now able to provide some supplies to the Deir Ezzor Airport.]

Impressive logistics , with the desired result , Deir Azzor is standing strong . And Damascus has its water supply back , a beautiful week of wins for the SAA .

Sounds like something from the Vietnam War. Hope Russians & Co make a better result.

All this work to make sure it was successful, further shows that telling everyone of the operation before it happened was a mistake.

Cool shit, let’s have more of these reports. Like the one you had of the Tiger soldier documenting the entire fall of Palmyra (the 2nd time), keep giving us this stuff.