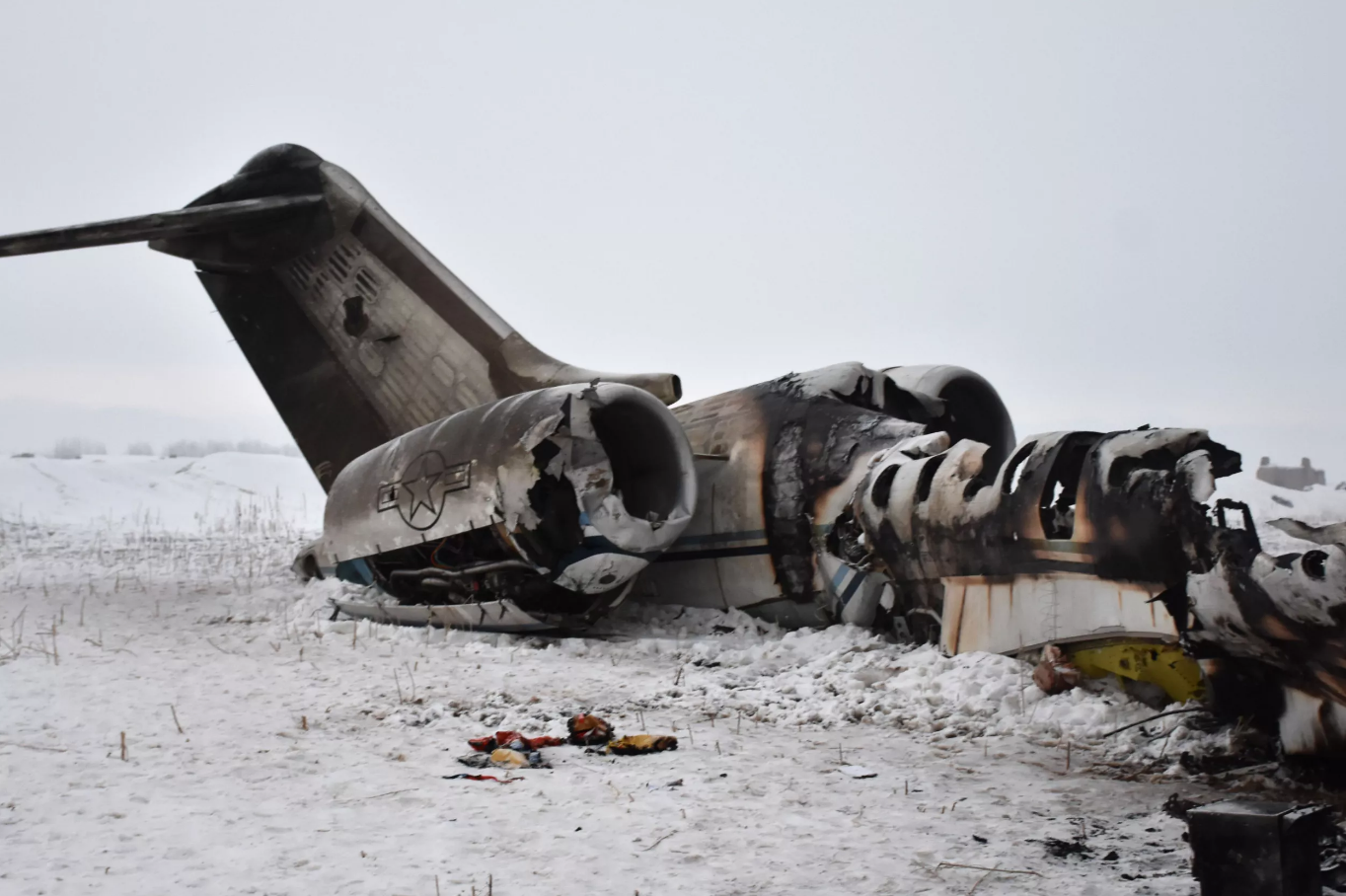 US Navy Seals, reinforced by Afghan Security Forces recovered the remains of the crew who died when a US Air Force Bombardier E-11A crashed in the Taliban-controlled Ghazni province. The plane crashed on January 27th, and the US troops allegedly went there on January 28th, but the timeline is suspect.

The Bombardier E-11A is a electronic surveillance aircraft and is likely from the 430th Expeditionary Electronic Combat Squadron based out of Kandahar Airfield, which is located approximately 286 kilometers away from where it crashed. The Bombardier E-11A typically carries a Battlefield Airborne Communications Node (BACN), which is a communications relay and gateway system that enables real-time information flow across the battlespace between similar and dissimilar tactical data link and voice systems through relay, bridging, and data translation in line-of-sight and beyond-line-of-sight situations.

Ghazni police chief Khaled Wardak said US choppers landed at the site in the late afternoon on January 28th.

“Following the removal of the bodies, our forces have moved back to their bases. We don’t know where the foreigners have taken the bodies,” added Wardak.

Nasir Ahmad Faqiri, the head of the provincial council in Ghazni, confirmed the operation, saying the Americans took at least two bodies from the scene.

The US Forces in Afghanistan spokesperson Col. Sonny Leggett confirmed the operation, saying that the remains of two individuals were recovered, not revealing their identities.

“The remains were found near the crash site, treated with dignity and respect by the local Afghan community, in accordance with their culture,” said the statement from U.S. Forces-Afghanistan.

The Taliban were first to report the crash and have not claimed responsibility for crashing it. Media attributed it to them, but the US said that there was no indication of it being downed by enemy fire.

“The crash is under investigation, there are no indications the crash was caused by enemy fire. We will provide additional information as it becomes available,” said U.S. Army Colonel Sonny Leggett, a spokesman for U.S. Forces-Afghanistan on Twitter. “Taliban claims that additional aircraft have crashed are false.”

It is unclear, however, how the US forces entered the Taliban-controlled area unimpeded, after there were numerous photographs and footage of the group being deployed to the location of the crash. The US allegedly recovered the remains with helicopters, and it is also unclear how that happened, since the Taliban have, more than once, proven more than capable of dealing with enemy helicopters.

There are videos showing numerous military vehicles, and aircraft circling above en route to the crash site, as early as on January 27th, thus it is questionable that the Taliban simply packed up and left, allowing the US to recover the remains and black box.

After all, the Taliban have had the upper hand in the conflict in Afghanistan for a while now, and it is questionable that they simply abandoned an enemy military plane.

Since, according to the statement the black box was also recovered, and it is suspect that the Taliban were unaware of there being a black box on the Bombardier E-11A, similarly to there being one on most, if not all, manned aircraft.

“The force also recovered what is assessed to be the aircraft flight data recorder. The cause of the crash remains under investigation, however there are no indications the crash was caused by enemy fire. The remains were found near the crash site, treated with dignity and respect by the local Afghan community, in accordance with their culture. U.S. forces destroyed the remnants of the aircraft.” the statement added.

According to the statement, the entire crew of the plane was just the two whose remains were recovered.

Videos and photographs suggest that there have been victims, as there were charred remains, but most footage simply shows one corpse.

Furthermore, there are media reports that the downed plane was the mobile CIA command for Michael D’Andrea, head of The Central Intelligence Agency’s Iran Mission Center. And all of the equipment and documents were now allegedly in Taliban hands.

D’Andrea was a major figure in the search for Osama bin Laden, as well as the American drone strike targeted killing campaign. He was allegedly the one behind the drone strike that killed Iranian General Qassem Soleimani and was the most prominent figure of the CIA intelligence in the Middle East.

There is yet no confirmation, and it is likely that the names of the victims will be released at one point or another, after their families have been notified.

NEW video surfaces from #Ghazni plane crash site. This video was clearly filmed before than the ones that earlier emerged. The plane is still on fire. #Afghanistan pic.twitter.com/syupVU6gzE

There is no mystery, the Americunt murdering arseholes got whacked, pure and simple!

Is there now a suggestion that the crew bailed out and thats the reason for the blackout of information. This plane does not operate with a crew of 2 …. EVER!

If only 2 bodies were recovered it means the rest bailed out in Taliban controlled area and are now on a hide and survival mission. Even if this plane is being shuttled from one destination to another it carries a minimum compliment of 6

Wait for reports of mild concussions among the ‘survivors’ …

and the rest are recovering at a beach on the gulf of Afghanistan :) since Afghanistan has so many wonderful beach resorts.

The other survivors are “singing” just now.

As I said from get go, this is a 700 series Bombardier and its civilian version the RJ can configure upto 76 passengers. The dumbass Americunts think we all fell off the back of turnip trucks in Alabama. Stupid liar motherfuckers.

They were already dead in ain asad iraq

Lol, the Anglo-Zionist Terrorist Camp has lost on every front, Iran is a Superpower, the power of the people who back the play of the Clerics and Government. The Iranian people under the Shah were Slaves to the Imperial System from England to the [USG]. The Iranian people had no were to go or trust but there Clerics. Here is a true story, once the Shah walked into a School in the Holy City of Qum, An Islamic Seminary, all the Kiss ass Ayatollahs and sacred Students were sitting down studying, Well when the Shah walked in with his team of Hitmen the Savak they all stood up to greed him “BUT-ONE”… When the revolution came down on the Shah he asked his secret Police the Savak, who is this Ayatollah who all the people Of Iran are behind him in overthrowing me, well one of his top men said, remember when we went to Qum to the Seminary and all stood up tp greet you, remember the one who did not get up-? The Shah said I remember, well that’s him the Honorable Sayeed Ruhollah Khomeini-! The Imam took over the country by the wave of his Hand-! F.A.C.T.S-! https://uploads.disquscdn.com/images/99e7441d75f05daf6021b50dc862952d1bccaa0f0d45530d0c349785712ebc18.jpg https://uploads.disquscdn.com/images/99e7441d75f05daf6021b50dc862952d1bccaa0f0d45530d0c349785712ebc18.jpg

Is that a pic of rusty iron dick. No wonder he is only in the reserves for the IDF where his main job is to guard the canteen and swab the floors.

The Islamic Jihadist Republic of Iran is a Superpower in fake news, empty threats and hot air.

More hot air from the jihadists in Iran. You only know how to kill unarmed Iranian protesters, Iranian passengers on civilian aircraft, etc. You are afraid to kill “infidels”.

Fake [BS] News bring your fact Idiot-! Like I just did, no one believes the [BS] out of jew owned [MSM] Trump set that right The [US] and ISISraHELL are now “Paper-Tigers’ Never for get how the [IDF] ran, & ran, & Ran in the 2006 war with Hezbollah, proof is the on the Battlefield The [IDF] was “Humiliated the So-Called “Merkava Tanks” are collecting rust & dust still to this day left on the Battlefield, hot air, lol,lol,lol The [IDF] has the highest Suicide rate in all the armies in the world, plus the most Desertion. you are self deceived, and confused-! all you AngloZionist fake jews are not the Biblical Israelites, [DNA] IS PROOF

One thing is for sure all of ISISraHELL and [US] MILITARY Bases and ships are sitting “Ducks” now that the mighty Iran showed the world they can pin-point any base, and hit it with ease. Don’t be sacred.

ISISraHELL in next, you can bet your little jew ass-!

American planes never get shot down they just crash. This the BS that they sell to the stupid Americans.

Very likely the take down was electronic by the modern Iranian electronic weaponry. This would be the reason for the purposeful (western) confusion of speculations on every last part of this event. Not supposed to be possible by western beliefs in Iran’s abilities. Call it another piece of Iran’s publicly stated revenge. Such events will not stop until the U.S. military LEAVES the Mideast.

Something tells me the U.S. public won’t be mourning the loss of D’Andrea, (a senior terrorist leader in the CIA) in the same way the vast majority of the Iranian public did over the murder of general Soleimani.

Difference between honourable and shameful..!

But if it was downed, how and who?? I mean Taliban don’t have system that can bring down bird from 5+km, probably 3km at the best.

IF it was a missile, its a bloody good shot whomsoever it was :)

There are rumors that another plane is downed in Iraq.

Divine intervention I would think if its a US plane.

Mild concussions all round …

“We will provide additional information as it becomes available,”…sure you will, as soon as you get your story straight, that is.

Something called happened to these zio cowards boys hahahahaha

Anybody got solid intel on this rumour of a C-27 Spartan going down in Iraq yesterday?