On November 17, an ISIS official revealed to the ISIS-linked newspaper al-Naba’a that 8 suicide bombers and a VBIED of ISIS attacked the Deir Ezzor Airport south of the city of Deir Ezzor on November 12. According to the official, the ISIS fighters clashed with the airport guards and stormed the airport, before blowing up themselves, and their VBIED inside it. 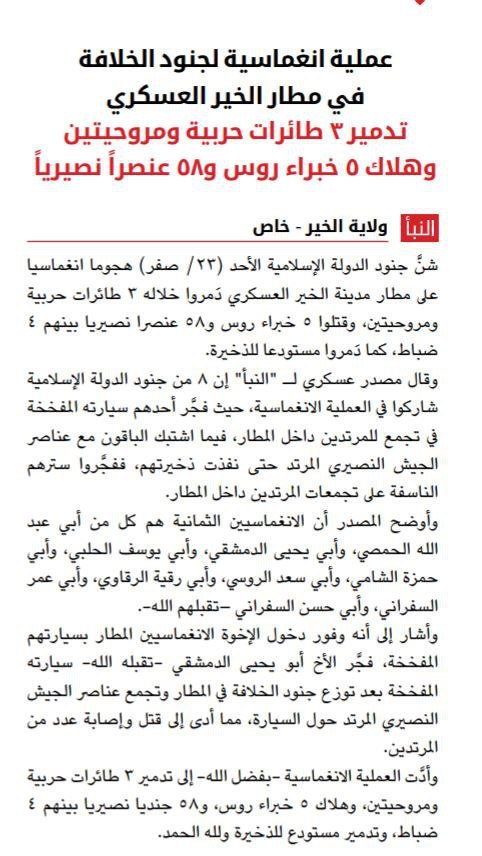 On November 12, Syrian pro-government sources confirmed that the Deir Ezzor Airport was attacked by ISIS. However, according to the sources, only 2 SAA soldiers were killed and 2 other were injured in the attack.

Pro-government sources claimed back then, that the terrorist who was driving the VBIED was a Chechen from Russia and that all the attackers were wearing Russian Army uniforms. The sources added that the attackers tried to trick the guards to enter the area and blew themselves up when the attempt failed.

In its report, al-Naba’a  revealed the names of the 8 ISIS suicide attackers. There was an alleged Russian citizen called “Abu Sa’aed al-Rusi” among them. This confirms the claims of the pro-government sources.

On November 15, Syrian opposition activists published what they described satellite images of the Deir Ezzor Airport before and after the November 12 ISIS attack. The photos showed 4 explosion impacts on two of the airport parking yards. However, the source and date of these supposed satellite images were not verified.

ISIS cells will likely try conducting more such attacks against the SAA and other factions operating in Syria when the caliphate is officially defeated.

These are images from high altitude spy drones. Only the US and Russia possess such drones. If it was the so called US opposition which posted them, then the US was the meastermind behind this. Collusion US/ISIS once again prooved!

bullshit. imagery like this can be found on tens of places on the internet. i could download google earth pics, pass them through photoshop and make you believe its drone footage.

The Google Earth images are not up to date on daily base but annually. It is the same source of spying in action over the North Korean factories recently posted on SouthFront. Ergo, Deo is right.

What?? You have not access to spy satellites if you are not James Bond. LOL We are saying the Intelligence did pass to rebels those images. Regarding your last statement about PhotoShop it’s hilarious…

“We are saying the Intelligence did pass to rebels those images”

and the “rebels” (actually ISIS, but it’s you that called them rebels) photoshopped them to make appear there were planes and that they scored on the airfield.

The airfield is operationally derelict and has been used only for humanitarian operations.

This is propaganda made for jihadists and military analphabets which yanks and their bedfriends try to sell to western milbuffs, which are so in need to hear that Russia is taking losses in Syria.

My disgust with your kind has never been so intense.

From Southfront: “On November 15, Syrian opposition activists published what they described satellite images of the Deir Ezzor Airport” Are you deliberately misinformed or am I wasting my time? PLONK

“Are you deliberately misinformed or am I wasting my time?”

the second choice no doubt.

I think he means “wasting my time with a silly person” :O

his perception of silliness isn’t important you know

Have you gone into retard mode again ?…… just read peoples comments and try and understand.

Do you think the North Vietnamese defeated the US in the Vietnam War, Or….the US needed a way out,…so they withdrew forces and supported the ARVN, Who of course were not going to stop the Organized juggernaut facing them?

Russia knew the US just wanted to have a war…..and needed a way out. Since Korea. ..the Masonic game goes like that. You exit a conflict yet leave Geopolitical tension affixed to it…like 38th Parallel When Japan surrendered in August 1945, the 38th parallel was established as the boundary between Soviet and American occupation zones. [wiki]

Hey waddya know. ..it all rolls back to post WW 2 Occupation zones…. Trump’s Rocket man fires off missiles, ….US stuffs Missile defence into South Korea, The fleet surges. …the media beats the war drums….the Sheeple start singing to Jesus In Kevlar each Sunday.

Lol…..Putin must laugh at the Kabuki theatre. …the extent the US will go to have this stupid game of death and fear. Which brings us to this SF article…how ever it was selected/presented…..it flows Geopolitical tensions….readers go from fear to jubilant depending on events.

For me….visit to SF is….”When is that Masonic trickster in Moscow going to shoot down the f@@##$ Israeli warplanes?…..when is he going to let Syria or Iran”.??

I have a audio link to a program which rips the lid off the Masonic influence of the US Founding Fathers, …how the American Revolution was run by the Masons. Infact 2 interviews…if you want the James Perloff publish.

Once a person gets it….The Game and the way of extortion comes into view.

The other interview exposes Benjamin Franklin and the Hellfire club,plus all the Masonic Manuvering to bring about and run the American Revolution war.

Some reading along will take in this interview and consider. For some it will be All new and devastating

i understand, and although i’m not sure i agree on everything you put it down well

as for the US results in Nam, I’d call that a US defeat, in the sense that they weren’t able to achieve their objectives.

It appears it’s more about having a War…than winning a war. WW 2 was win…the rest are tumble a dice and continue down the board. A Family member flew F 15E 48th out of Lakenheath for Operation Northern watch. US bombed Iraq for years,..while daddy Bush got his Coalition of the willing, And then pummeled Iraq. Except they pulled back from ending Saddam and left the game to run some further. Iraq,Syria are entangled from that period, …as Sunni/Shia went after each other, Even the Kurds got betrayed. 911 with its conspiracy is kick off for the Fake** War on terror. Gotta have that war….that’s the template!

My posting about the history of the Masonic, and links…is an invite to readership to consider the History of the Masonic Lodge and wars/revolutions as Perloff directs in the audio interview. The Masonic has morphed into what we define as the Corporation/Elite. Review the Corporate logos to see the Overt Masonic symbolism https://joquincy.weebly.com/uploads/2/3/9/6/23962896/1071392.jpg?731 See the 13 ?

Russia was Overthrown by Bolsheviek Jews …this was Masonic. ..England had it for Russia just as they did for Germany. Russia broke away from Communism…yet the powerful Jewish Oligarchs are there near Putin’s periphery, ..and Russia’s Central Bank is still BIS/Rothschilds System.

Putin and Xi are players in the old game…..they however have competing interests vs England/US. Rothschilds really could not give a RIP about Greater Israel and YHWY. They were with the Masonic side long before Israel appeared. The game needs war to plow the world, …they probably do not want nuclear war. Wars which they can control. ….which requires concessions and back room deals. In a sense the big nations are forced to play. Russia Military Industrial Complex certainly needs conflicts to. Have conflicts. …let that run a while.

Where do you think the internet gets these pictures?, Deo is correct.

Not this time. If there is an attack on a Syrian target, US command might want some photos of it whether they masterminded it or not.

It is nice of SF to reuse the tweet I posted as a comment on SF two days ago.

taking for granted info coming from ISIS newspapers is a great way to lose credibility.

in fact, i got doubts that the airport was reopened to any kind of operational usage (besides some cargos landing there to bring emergency supplies) since the liberation of deir ezzor and it’s sure as hell that there were wrecks of aircraft and helicopters there since 2012.

perhaps somebody could find links that this fact actually happened (possibly not form ISIS sources)?

remember that the city has always been supplied by parachute airdrops until the liberation, and that some cargo airplanes actually landed at the airstrip some days after the liberation – but nobody talked about it being used by the SAF.

because otherwise it’s just the usual pingpong game with sf that talks amaq and dutch that claims he/she was telling it much ago that syria is losing and they are having lots of losses together with their allies, which in the end is just the point of it all

I can’t help but agree that there’s a feeling that something is going on with SF. It’s subtle but visible.

as they say, there’s material coming from many sources and i prefer to focus on single articles. if i ever find a pattern i’ll let you know :D