Representatives of the Russian Defense Ministry and special services, familiar with the situation, told about the operation on the second liberation of the Syrian city of Palmyra. 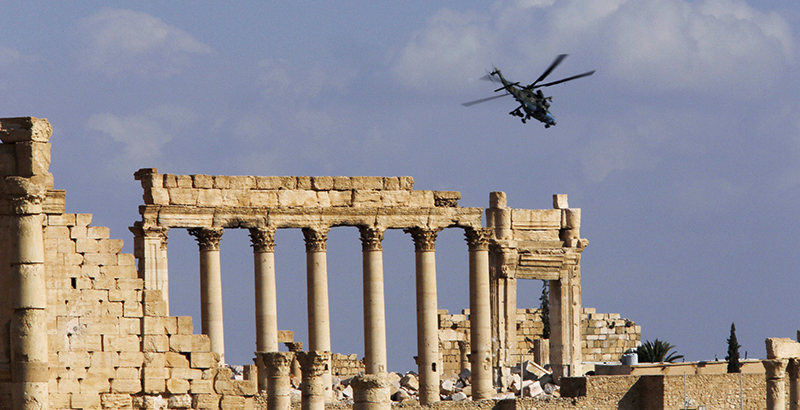 The operation on liberation of Palmyra city was started in mid-January and was conducted in several stages. About five weeks were needed to break through a corridor to Palmyra. Syrian troops were moving from one residential place to another one along the M20 highway. Terrorists conducted the so-called maneuver defense and actively used mobile raid groups on off-road vehicles, equipped with machine guns. For this reason, it was necessary to think not only about moving forward, but also about covering the flanks.

As the Izvestiya newspaper reported, citing a source close to the Russian Defense Ministry, in December, there were not enough forces to go into counteroffensive.

“The most combat-effective units and detachments were involved in the battles in Aleppo. When militants of the Islamic State [IS] recaptured Palmyra and moved further to the west, they were stopped with great difficulty. The situation was saved by troopers from the 104th Syrian Brigade of the Republican Guard. They stopped militants and stabilized the front line in that area. Only then, in the course of the liberation of Aleppo, transfer of some units and detachments was started. They were liberating Palmyra,” the newspaper quoted its source.

As Izvestiya noted, the main role in the offensive was played by the 18th Tank Division and the 5th Legion, recently formed from volunteers with an active support of Russia. The Syrian Air Force and the Russian Aerospace Forces provided support for the troops from the air. The teamwork of the Su-25 Grach attack planes and Ka-52 Alligator helicopters, which performed targeting assignment for the attack aircraft, showed good results. According to a newspaper’s source, familiar with actions of the Russian Aerospace Forces in Syria, the Alligators actively used the Vikhr antitank guided missiles, capable to hit targets at a distance of up to 10 km. The newest Russian Uran combat robots also could have been seen near Palmyra.

Along with the offensive on Palmyra, Syrian troops also managed to recapture from terrorists gas and oil fields, located in the desert. The newspaper noted that these facilities are very important for Syria now, as the country suffers a shortage of fuel.

On February 23, the Syrian Army came to the western outskirts of the city. After that, advancing units needed about a week to seize the dominant heights and take the city in a semi-circle, outflanking it from the north.

“During the first storming of Palmyra and the subsequent counteroffensive of militants, the sides mainly used the southern direction,” one of the newspaper’s sources noted. “There are more roads and better terrain for maneuver by the mobile forces there. Also, it is more convenient to enter the city’s buildings from the south and immediately take the center of Palmyra. For this reason, the defense of the city from the north was usually limited by several roadblocks. Before the liberation of Palmyra, the reconnaissance had worked very well. Positions of militants, as well as their defense system were revealed in the northern direction.”

March 1 became a turning point. The Jabal Khayyal height, dominating over Palmyra, was taken, and fighting for the northern and western neighborhoods of the city began. By the evening, militants realized senselessness of their further resistance and started to hasty retreat to the east. Suicide bombers and snipers covered their rearward passage. Ruins and roadsides were densely mined.

“As it was planned, Syrian units and detachments struck from the north,” one of the newspaper’s sources said. “They brilliantly accomplished the assigned task, immediately knocking out militants from their positions and taking designated facilities. But it was only half of the battle. It was expected that militants will immediately start a counteroffensive. This is their usual tactic, to immediately counterattack and give no chances to mount defences. But unexpectedly for everyone, the IS group carried out several small strikes in Palmyra, and then militants’ units simply began to flee from the city.”

On March 2, terrorists launched the last serious counterattack in order to gain time to escape. Nevertheless, by the end of the day, the most part of the city was liberated. Not only the Russian air power, but also soldiers of the Russian Special Operations Forces Command actively participated in the battles for Palmyra. On March 3, an airport, located in the eastern outskirts of Palmyra, was cleared from militants.

The second liberation of Palmyra was a debut of a new Syrian elite detachment, named IS Hunters. According to local media, the “hunters” were trained and equipped by the Russian Special Operations Forces. The main task of the new formation is to protect Palmyra and its surrounding gas fields.

As the newspaper concluded, the liberation of Palmyra became a kind of test for strength for the renewed Syrian Army, which is being created with an active support of Russia. The Syrians proved that they are able to fight against the strongest groups of terrorists, who, during the fight for Palmyra, fled from the battlefield for the first time since the beginning of the war.

Some dream amount recapturing the whole Syrian territory from the Muslim radicals and their Gulf stooges; I have said all along that Assad and his supporters should consider themselves extremely lucky if Hezbollah, the Russians and the Iranians would re capture the southern flank all away to Deir ez-Zor (the most optimistic scenario); The north is irretrievable lost and do not foresee a easy solution for Idlib either which is saturated with Sunni Islamists of all stripes.

The Syrian army’s lack of combat troops is a long standing problem which comes time and again to plague them when it comes to holding re- captured territory. The goat fuckers know this and we have seen them times and again taking advantage of their numerical superiority. If it had not been for the Russian air force, Assad would have shared Qaddafi fate long ago.

So whats the best advice you can give to SAA/russians?

This is definitely the beginning of the end for ISIS, at least in Syria, and for the Syrian war in general. Long live SAA/Russia, and short live its enemies!!!