The US has established a military base in the north-eastern part of Syria, deploying 800 US servicemen there. 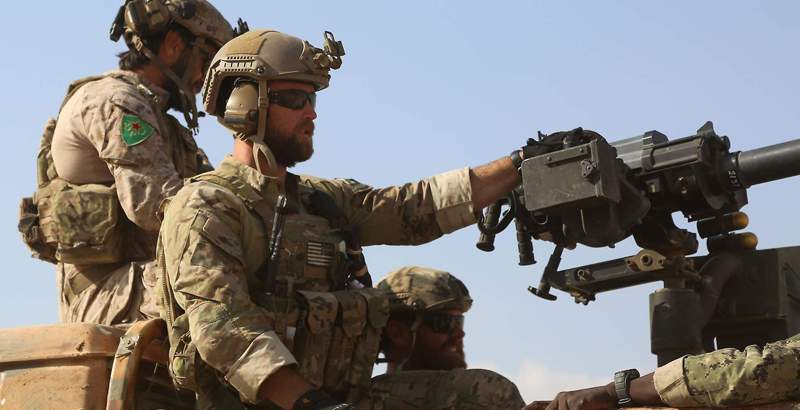 Armed men in uniform, identified by the Syrian Democratic Forces as the US Special Operations Forces, ride in the back of a pickup truck in the village of Fatisah in the northern Syrian province of Raqqa on May 25, 2016 (Photo: Getty Images / AFP / Delil Souleiman)

Washington has established a military base in north-eastern Syria, which is currently controlled by the Kurdish Democratic Union Party (PYD), the Daily Sabah newspaper reported on January 23, citing a report of the Kurdish BasNews news agency.

According to BasNews, the US created the new military base in the western part of Syrian Kurdistan, also known as Rojava, in order to strengthen the support, which is provided to the local forces, fighting against the Islamic State (IS) terrorist group. An unnamed source from the Kurdish-led Syrian Democratic Forces (SDF) told the news agency that “a large group of the well-equipped US Special Forces” has recently arrived at the Tel Bidr base, located to the northwest of Hasakah.

In addition, the source pointed out that the US Special Forces arrived after local Kurdish fighters have started evacuating of the Tel Bidr base, moving all their military equipment out of the site.

As the source noted, the total number of the US Special Forces and military instructors, who arrived at the base, is about 800 people. He also added that their arrival is a part of the US-led coalition’s plan to defeat IS terrorists in Deir ez-Zor province. “They will also provide support to the SDF forces, which are now advancing towards Raqqa,” the source said.

However, according to head of the Center for Islamic Studies of the Institute of Innovative Development, Kirill Semenov, the Daily Sabah newspaper made a mistake, saying that the new base is controlled by the PYD. As he told the Svobodnaya Pressa news website, Americans control their facilities in Rojava solely by their own forces and stressed that the SDF and especially the Kurdish People’s Protection Units (YPG) of the PYD just cannot control these bases.

BasNews pointed out that earlier, the US set up several military bases all over Rojava, including Kobani, Ain Isa, Rmeilan and Reif Hasakah, in the frameworks of the international coalition’s campaign to fight against the IS in Syria.

Currently, the US has five air bases in the region: Al Dhafra (UAE), Al Udeid (Qatar), Isa (Bahrain), Ali Al Salem (Kuwait) and Incirlik (Turkey). In addition, according to satellite images, the US also long ago built two facilities in the area of Kobani in Syrian Kurdistan. The first facility is located on the territory of the Syrian-French Lafarge cement factory – various storage buildings, as well as the AH-64 Apache, the BlackHawk and the CH-47 Chinook helicopters, and the V-22 Osprey convertiplanes of the Marine Corps were spotted there. The second facility is located 35 km to the south of Kobani (Rumelan) and equipped with a runway, which was built with the participation of US engineers. The facility on the territory of the Syrian military base in Ain Isa is used by the US and the SDF as a logistics center for their offensive on Raqqa and a training camp for preparation of local population for the fight against the IS.

The big problem is how to get US out of north east Syria in future. This is part of partition plan, US doesn’t physically leave, once it has a base in another country – military bases are their means to control and monitor another country.

The turks will be super annoyed and will constantly whine until the US doesn’t have bases in kurdish territory.

I think Kurds would be more than happy to have bases stay. They may receive more western aid and Erdogan will think twice about messing with them. It’s not like they have an official country anyways.

Kurds will be very dumb if they fall for the western trap of trying to create kurdistan, they will get crushed by a coalision of Turkey-Syria-Irak-Iran, it will be an onslaught… After seeing what happend to Syrian rebels that fell to western promises just to be crushed into oblivion they will be signing their own stupidity certificate.

“They will get crushed by a coalision of Turkey-Syria-Irak-Iran, it will be an onslaught” Without Russian military help, there is diddly-squat progress on the ground against ISIS and Al-Nusrah.

So what, Kurds are not like ISIS, they do not use suicide tactics on a large scale, neither mass terror like ISIS, the secret of ISIS power is exactly their strategies devoided of any sense of humanity and even selfpreservation. Also, Kurds betrayed Russia siding with Israel and USA, why should Russia not help their allies having mercy of Kurds? All developments leads to the conclusion that thre is an understanding between Russia-Irak-Iran-Turkey-Syria to not allow the creation of Kurdistan as it will be an USA/Zionist Enclave undermining the position of all others, Russia included. Kurds will need to get to the table and stop accepting to be a pawn o USA and Israel. And yes, they won’t have their state.

“Creation of Kurdistan” is the carrot story the US has fed the Kurds , but everyone knows the US will just use the Kurds to either lanch attacks against Iran , or Turkey , or Iraq if the Iraqi’s ask them to leave . Untill the Americans leave the area , Kurdistan is much too dangerous for those nations involved , Turkey , Syria , Iraq , and Iran . Russia certainly does not need constant warfare on its southern border .

Barzani is Turkish backed dog in Iraq who pushes for Independence, no one told you this apparently?

Don’t play dumb now Turkistan is trying to establish one in Iraq right now just to keep it’s influence and keep Iran out, you must be clueless if you ever think Iran and Turkey will ever get along. They are historical rivals to the fullest. Who said Syrian Kurds wanted a state the only ones who say that is Turkey. How did Kurd’s betray Russia that is the best joke there. You need to look up the word betray buddy. Everyone has a pawn in this game when will everyone stop being a pawn is a better question?

Turkey had a lot of imperial plans before they backfired, let’s see how those will unfold if murica push for kurdistan in Syria with a current kurdish rebelion just across the border.

No; the Russians will not help anyone in fighting the Kurds.

They are helping already giving tons of weapons to the Syrian government.

But the Syrian government is not fighting the Kurds.

But it will be if the Kurds try to break up Syria, and SAA will have full support from Moscow.

No, they will not.

In fact, when the Syrian president Bashar Hafez al-Assad announced that he would fight until he has regained control of the whole of Syria, he was quickly scolded and condemned by Vitalij Ivanovič Čurkin (sorry, I do not know the English transliteration, but I hope that you know whom I mean—the Russian permanent ambassador to the United Nations) which was a clear sign that Russia would not support it and it was widely interpreted as a sign of understanding not only for the Kurdish demands, but also for the need for mutual respect and reaching agreements.

Likewise, when the hostilities in Hasakah broke out, Russia rushed to mediate a ceasefire.

Clearly, Russia’s objective is Syria in not in preventing the Kurds from breaking up Syria. It has been clearly announced and often repeated that Russia’s objective is only in fighting the terrorists—and the Kurds, the Kurdish military units, are not considered terrorists. Unlike others, Russia has not only consistently invited them to talks about Syria, but also emphatically lobbied for their presence in talks, where they were not invited.

Furthermore, supporting the SAA against the Kurds would be a huge blow for Russia’s image, which Russia cannot afford.

“And yes, they won’t have their state.” That is your opinion. Theirs is totally the opposite. Time and multitude of lost lives will paint the final picture.

Not just mine but the official stance of Russia. The message was delivered today as the new draft constitution of Syria only allows the division of the territory with through national referendum, and they also propose to give kurdish language official status. Kurds may try to have their state but you can bet Russia wil give SAA full support in curbing their rebelion.

The chances of those 4 countries uniting for a common goal is about as low as the sky falling. You underestimate Islamic differences and political gains.

What were the chances of Russia and Turkey perform military operations together a year ago? During war times ralities on the ground can shift from day to nightm now everyone is waking up for the fact than Israel and USA are the enemies of all countries in the region, they might engage in a colective defense cooperation.

Yet Turkey continues to host U.S./NATO bases despite the temporary hissy fit Erdogan had just after the failed coup attempt.

“US doesn’t physically leave, once it has a base in another country” ??

What, that all you got? How about everything else from Philippines to Kosovo? You are a spanner, indeed.

Proud to be a spanner. Proud also to avoid gratuitous personal abuse. This is primarily a European/Near Eastern forum. Please try to keep up to our standards of courtesy.

Your examples are pointless. France, seriously? That was a rolling WWII campaign through an allied state, not an act of war against or occupation of French state, and incidentally De Gaulle subsequently exited NATO politically forcing the removal of US military from France. Try, Germany, Japan, Kosovo, Iraq – the sorts of countries US attacked, for various reasons, yet non the less currently maintains powerful military occupations of, up to many decades later. Not personal abuse – merely affirmation of your self declaration.

I believe the base is here on Wikimapia based on the earlier SF article mentioning the proximity to the ancient citadel. If anyone has a better idea, let me know.

Not just this major base at Tel Bidr, Kobane helicopter base, FGA forward operating bases 35 km south, Ain Issa now logistics base for all US ground forces in Raqqa area. BUT ALSO what about reports that joint US-Turkey base being established in NW Aleppo at JABRIN ?? less than 10 kms east of the MENAGH Airbase now under YPG/Afrin Kurds ? This is beginning to look like the permanent loss of all Syrian territory north of 36.5 degree N Latitude, with dual US/Turkey control under some fake “safe haven status “, while the PYD/SDF get their own protected statelet in Hasakah/N Raqqa. I predict the deployment of a US airborne/airlanding Taskforce, drawn from elements already in theatre (Iraq) in the guise of creating a humanitarian “safe haven” The break-up of Syrian into ethno-sectarian statelets remains the goal of US/GB/FR/Israel,

As I said long ago, ISIS was created by the U.S. to provide an excuse for them to violate Syria’s airspace and now set up bases in Syria. I remember how calm the U.S. military and government was when ISIL/ISIS was taking over Iraqi barracks and weapons depots. They actually seemed pleased to me. It was part of their plan.

Does anyone know a Andrew summers, army, in Syria. I have an important message for him about his Facebook account

Say Hello to New Kurdistan. They also have proven themselves to be great and tenacious fighters. Turkey has huge problems at home. Russia can’t feed its own people. Syria ceased to exist years ago. Iraq will do whatever America wants. Iran is running scared.

Who’s the bad guy if the Syrians with Russian help bomb the base in N.E. Syria and Kurdish and amerikan troops are killed? Why the US would be. They have started a military base in sovereign Syrian territory without the permission of the legal Syrian government!