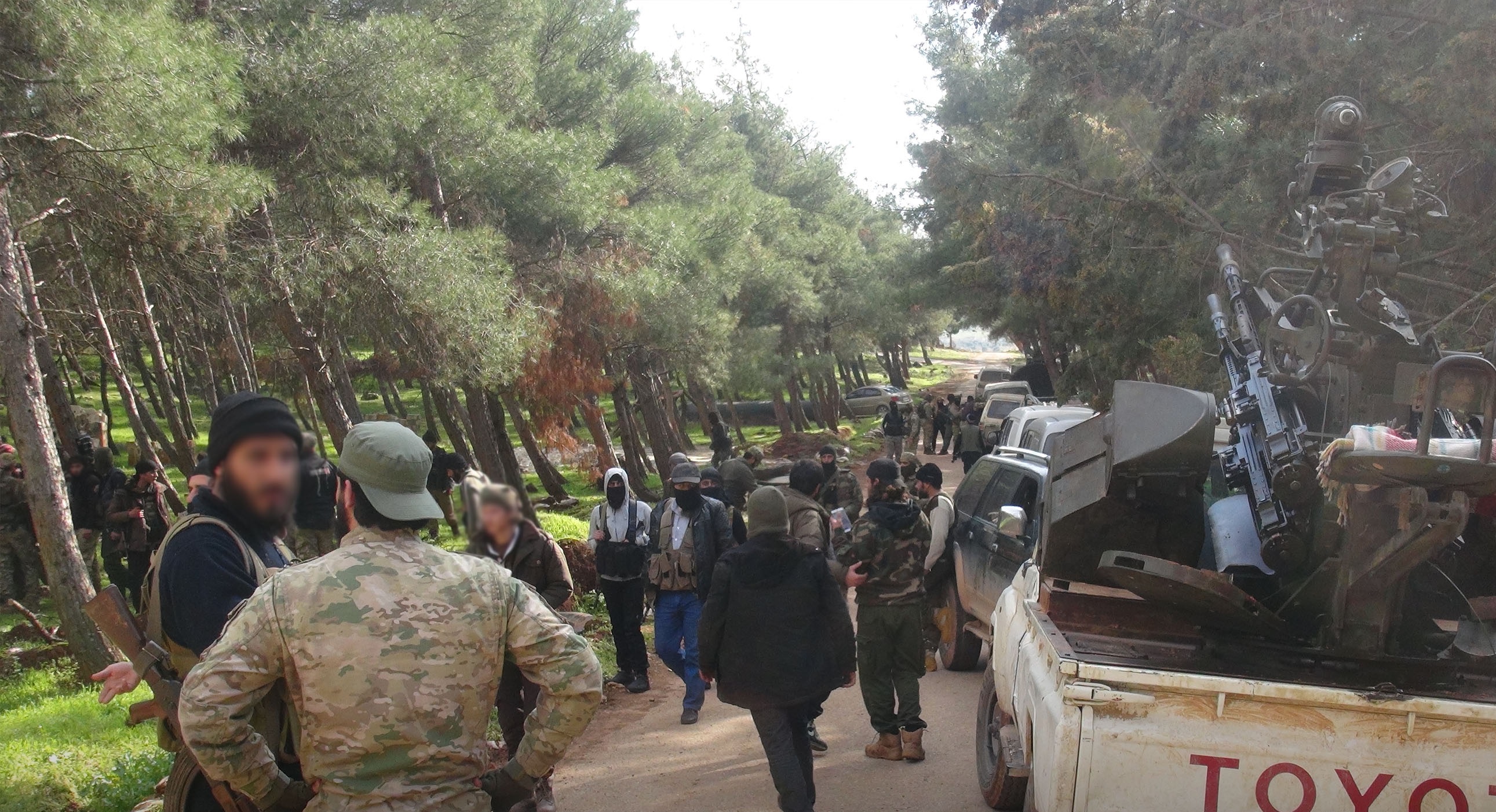 Hay’at Tahrir al-Sham (HTS), the former branch of al-Qaeda in Syria, is massing its forces around the towns of Maarrat al-Nu’man and Ariha in the southern Idlib countryside, the Syrian Observatory for Human rights revealed on January 9.

Syrian pro-opposition activists said that the radical group is planning to attack the two towns, which are controlled by the National Front for Liberation (NFL). The Turkish-backed coalition was formed by several armed groups, like the Ahrar al-Sham Movement, Faylaq al-Sham, Jaysh al-Nasir and the Free Idlib Army.

A day earlier, HTS launched an attack on the positions of the NFL in northwestern Hama. The radical group defeated NFL forces, represented by the Ahrar al-Sham Movement, and forced them to sign a surrender agreement.

Rami Abd al-Rahman, a director of the SOHR, said that Turkey is responsible for HTS’ attacks on its own proxies in northwestern Syria. Ankara didn’t move to support the NFL during any of HTS attacks and didn’t even condemn the radical group’s crimes. These are key arguments in the support of Abd al-Rahman claims.

“HTS and the Jihadists groups now control over 80% of Idlib, the western Aleppo countryside, the northwestern Hama countryside and Lattakia’s mountains … HTS wouldn’t have dared to invade these regions, where Turkish-backed factions are present, without the approval of the Turkish intelligence,” Abd al-Rahman said in an interview on the UAE-based al-Arabiya TV.

All of these developments allowed opposition activists to speculate that Turkey is conspiring to hand over Idlib to HTS and than to withdraw its troops from the governorate. This would save Turkey’s face in the front of its militants and allow Russia and its allies to attack HTS and put an end to its presence in Syria.

It’s the conclusion that fits. Turkey clearly has focus on the areas close to their borders and especially those areas controlled by the Kurdish militia. In a wider deal with Russia and Syria it makes sense that Turkey would trade the Idlib mess for airspace access and perhaps other cooperation elsewhere. If Syria regains Idlib and comes to some arrangement down the road with the Kurds, than there will be no opposition groups left holding any territory for the Syrian government to negotiate a new constitution or anything else with. Certainly no one holding enough of anything to legitimately make any demands. Game over.

In Idlib, Turkish border area is marked as HTS controlled. So Erdogan clearly does not view HTS as a threat, and will go out of his way to keep it that way. Maybe even some Turkish supplies where left “unguarded” in area and taken by HTS?

That may wind up being the tanks and armored vehicles that the Turks brought in to protect their observation posts.

Please God let it be so.

Even more conformation of collusion, I love it. I’ve been the most unpopular poster on SF saying everything this article is confirming, it’s actually like the the journo who put the story together has been reading my posts on SF and copying nearly every word I’ve been saying, but 3 or 4 months or more after I did. Cheers naysayers.

With all due respect, and I say this having not read much of your old posts tbh so I will congratulate you on your intelligence if what u say is legit, but could you please stop with the “I told you so I predicted everything”? It’s becoming rather obnoxious.

You’re right, I’ve been wasting my time anyway, and probably insulting all the wrong people by saying it, you included, so sorry. I’m no genius and know it, but I do pay attention to things I think are important.

good comment, but he is not the only one bragging as a high level sophisticated general.

Opportunity for war opportunity prostitute Kurdsh. Their must severe ties with Biblical goliath Trump and stop listening to his false trumpet and NATO.Join Russia,Syria,Hizbollah and Iran against Turkey.Kurdsh can be deploy in all government held areas and given national accommodation this will prevent Turkey to mobilise terrorist along Syrian Turkish border.

If Kurds can mix with Syrians in all the towns then Turkey will have no excuse to attack France,Germany,British and USA terrorism and terrorist promotion will stop.

So much for the Idlib agreement, Turkey was supposed to eliminate these jihadis. Looks like a new Idlib operation will need to be carried out by the SAA/Russians to clear them out once & for all

Either the Russians knew all along the Turks would do nothing in Idlib and thus have to kill all the jihadis themselves OR the Russians were duped.

In the end the Idlib agreement was always going to be temporary, a situation like this could not be sustained indefinitely. I reckon that Turkey didn’t know how to separate the good Jihadis (their Jihadis) from the bad Jihadis (Al Nusra). And if the SAA were to take the province all Jihadis would come screaming over the Turkish border looking for safety. Now at least Al Nusra is doing the separating for them. Turkey can now let the ‘good Jihadi’s seek shelter in Afrin and Euphrates Shield territory, leaving the ‘bad Jihadis’ to face the Russian and SAA music in Idlib.

At least I hope that will be the case. I still fully expect Erdogan to object to any military operation by the SAA in Idlib, just because he’s a mercurial untrustworthy asshole who wants to maintain his grip on Idlib, and just doesn’t care which Jihadi’s rule there, as long as its not Assad. Any deal with Erdogan is not worth the paper its signed upon, Hitler was more trustworthy when he signed the Munich agreement, even Satan himself can be trusted more to live up to his end of a bargain.

Well the ridiculous named National Liberation Front NLF (Jabhat lilTahreer al Watani) has collapsed and signed a surrender accord with HTS (see fotocopy) with the Ahrar ash-Sham and Suqour ash-Sham factions ceasefiring, removing all NLF CPs and barricades, exchange PWs, and agree to serve under a new even more ridiculous so-called Salvation Government (Hukum a lHalaS) !! So now remaining jihadist gangs are just Jaysh al-Izza (north Hama district) and Turkestani Islami Party (Uighars) around Jisr Shighour area , and the laughable named Wa Harid al-Mum’ineem which roughly translates as : And Incite the Believers or And Encourage the Faithful (can you believe the comical titles these jihadi thug gangs give themselves ? ). Notice that HTS advanced unopposed and rapidly thru all 12 of the Turkish checkpoints and OPs set up, supposedly to stop or prevent armed elements in the so-called deconfl https://uploads.disquscdn.com/images/a3b40bcc9952904087bf956e060725722e760f143adf2f8b5f61b1c2bb8d6411.jpg iction zones per Sochi protocols. So obviously the entire HTS operation was with Turkish agreement.

Why have some peoples’ faces been blurred? Is Sf afraid of being sued for exposing terrorists or did the file arrive like this into Sf’s hands? Or was Sf not wanting to upset Erdogan or Putin by showing the faces of the Sultan’s cutthroat lapdogs?

Good question indeed. To me, it looks like 2 x whities are the only ones blurred.

Haha! To hide the fact they are nw European or Anglosphere military intelligence saboteurs etc. Now that would be inconvenient given all the talking heads tell us this is a CIVIL war. Hahahah

Well, I did say the exact same plan a week or so ago, however I would also add (rightly or wrongly), that the Turks, or Turkish militias (vermin) will attack from the North, in conjunction with THE attack from the Syrians + allies.

Let us wait a week or so.

What a wonderful Putin-Erdogan agreement for the terrorists and Turkey. Do the terrorists need more time to have a good behavior Mr Putin ? Yes, let us give them some couple of years or more for they to become stronger and deadly with the Turkey support, of course.