Sorry, there are no polls available at the moment.

On October 2, all the political prisoners arrested on September 6, headed by former deputy Grigory Petrenko, will be detained for another 30 days.

The Rascani Sector Court in Chisinau ruled on Friday, October 2, granting the prosecutor’s request and extending their detention for another 30 days. The decision was made in secret: both the hearing and announcement of the sentence took place behind closed doors.

“Grigory Petrenko’s arrest was extended for 30 days. The other political prisoners, too. It was a predictable decision. When access to the announcement of the verdict was limited to the media, the decision had already been predetermined,” said Anna Ursachi, attorney for the political prisoners, after the hearing.

She noted that this decision would be appealed to the Appeals Chamber, which will hold a hearing on the case, most likely on October 8, at which the defense will demand the abolition of the sentence and the immediate release of all the political prisoners. 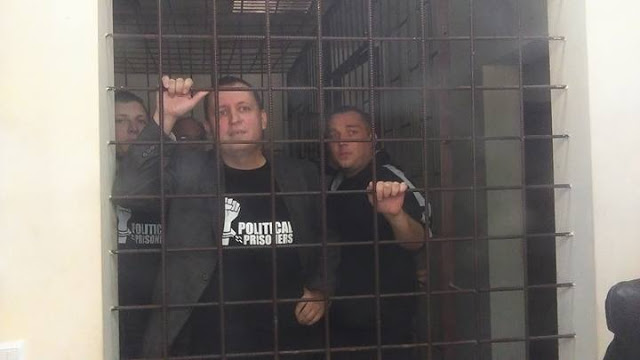 Recall that the court made this decision despite demands by the deputies of the Parliamentary Assembly of the Council of Europe (PACE) on the Petrenko case. It should be noted that at the beginning of this week, 32 deputies from all factions of PACE, representing 20 countries, signed a written declaration on the “Petrenko case,” which clearly demanded from Moldova “the immediate release of all political prisoners.”

Thus, according to the attorney, PACE recognized Grigory Petrenko and his companions as “political prisoners” and oligarch Vladimir Plahotniuc as a “threat to democracy.”

The leader of the opposition party Red Bloc, former MP, honorary member of the Parliamentary Assembly of the Council of Europe Grigory Petrenko and seven other protesters were forcibly detained by police on September 6 after a protest in front of the Prosecutor General’s Office and an attempt to set up a tent camp on the sidewalk in front of the building for a peaceful non-stop protest against the oligarchic regime. All of them were put in jail for 30 days, and now will be there for another month.