The former Soviet republic of Moldova may actually become yet another foothold for the US military in Europe. The US Naval Facilities Engineering Command Europe Africa Southwest Asia (NAVFAC EURAFSWA) plans to construct eight training facilities for military operations in urban terrain at the Bulboaca training base in Moldova. The fact that the US Navy Department is involved makes believe the facility will host American Marines. 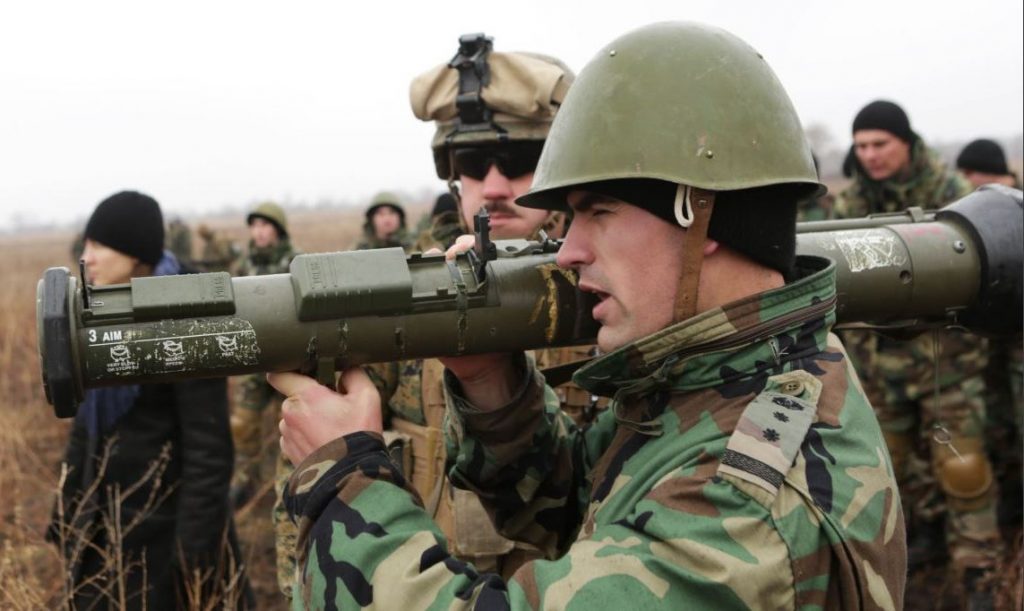 A total of $1.6 million has already been invested in the renovation of the Bulboaca base located near Tiraspol, the capital of Transnistria or the Transnistrian Moldovan Republic. The largely Russian-speaking region broke away from Moldova following the collapse of the Soviet Union in 1991.

The secession led to an armed conflict that ended in a ceasefire in July 1992. Russian troops were deployed to the conflict zone in accordance with the «Agreement on the Principles for a Peaceful Settlement of the Armed Conflict in the Transnistrian Region of the Republic of Moldova», signed in 1992 by the presidents of Russia and Moldova in the presence of Transnistria’s leader.

Today, 450 Russian servicemen are carrying out the peacekeeping mission in accordance with the decisions of the 1999 Organization for Security and Co-operation in Europe (OSCE) summit. Besides the peacekeepers, Russia holds units of the 1,200-strong Operative Group of the Russian Forces residing in Transnistria. The Transnistrian authorities strongly oppose Moldova’s plan to withdraw Russian peacekeepers, whom they see as guarantors of peace in the region. They point out that the mission has proved to be highly successful. The 25th anniversary since the start of the peacekeeping operation was marked in July.

Since 2005, talks on Transnistrian peace have been held in the so-called «5+2 format», which includes Moldova, Transnistria, the OSCE, Russia, and Ukraine, plus the European Union and the United States in external observers’ roles.

Moldovan President and Supreme Commander-in-Chief of the Armed Forces Igor Dodon stepped in to suspend the implementation of the plans to build a US military facility in Bulboaca, saying the move was not approved by him. The president said he will examine the issue. Meanwhile, the US stopped financing the project.

Anatol Șalaru, acting leader of the Party of National Unity and ex-Defense Minister, said he is going to sue President Dodon for undermining national security as the US suspended the $12, 7 military aid to modernize Moldova’s military through the Foreign Military Financing (FMF) program.

Moldova closely cooperates with the US and NATO. It joined the NATO Partnership for Peace program in 1994 and the Individual Partnership Action Plan in 2006. A NATO liaison office is to open in Chisinau soon.

Since 2016, Moldova has been included in a US regional program to build «more formidable defense capabilities… against aggressive actions by Russia or from other sources». Areas targeted include «border security and air/maritime domain awareness, as well as building stronger institutional oversight» of defense ministries. Last March, Lt. Gen. Ben Hodges, the commander of US Army Europe, said that military engineers would head to Moldova as the US looks «for ways to do more exercises in the southern flank of NATO».

In late July, the Moldovan parliament passed a declaration demanding the withdrawal of Russian troops from the territory of the unrecognized Transnistrian Moldovan Republic. The resolution was supported by deputies from the ruling coalition led by the Democratic Party, as well as representatives of Liberals and Liberal Democrats. The lawmakers from the opposition Socialist Party left the meeting in protest. Moldovan President Igor Dodon condemned the parliament’s decision, calling it a provocation.

Moscow expresses concern over the Moldovan policy in Transnistria. Russian military personnel movements are obstructed by Moldavan authorities. In late July, Russian Deputy Prime Minister Dmitry Rogozin was barred by the Moldovan government from flying to Transnistria in a military plane to celebrate the 25th anniversary of Russia’s deployment of peacekeepers there. Russia retaliated by halting imports of Moldovan farm produce, depriving Europe’s poorest country of a key market for its wine, fruit and vegetables. In early August, Moldovan authorities declared Rogozin persona non grata. Actually, the relations had begun to worsen much earlier after the expulsion of five Russian diplomats in May. President Igor Dodon believes that the government embarked on provocations against Russia in order to complicate relations.

Moscow has accused Moldova of undermining their relations and threatening regional stability. The Russian Foreign Ministry’s statement reads: «High-ranking Russian representatives and peacekeepers but also ordinary citizens of both countries have recently become targets of provocations. It seems that Chisinau politicians are trying to get to the forefront of the hysterical and hopeless campaign that has been launched against the Russian Federation». It adds that dangerous actions may have a serious destabilising influence on the general situation in the region and Europe as a whole. Kremlin spokesman Dmitry Peskov said Moldova’s decision to ban Rogozin was «much worse» than even the new tough US economic sanctions on Russia.

The US military presence is expanding everywhere, including areas in the proximity of Russia’s borders, such as Transnistria. This is a very dangerous development to make US forces and Russian peacekeepers watch each other through gun sights. Moscow and Chisinau may have different views and divisions but it does not make them adversaries.

With Russian peacekeepers gone, the situation would exacerbate and a spark would be enough to restart the hostilities – something that has been prevented since 1992. By hosting US-operated facilities on its territory, Moldova, a neutral state, will become a target for a Russian retaliatory strike. Parliamentary elections are expected to be held in Moldova in November 2018. Hopefully, the voters will make the right choice, electing more responsible people to end incessant provocations and adopt a more reasonable foreign policy. If the hopes come true, Russia and Moldova will become friends and good neighbors again.

The US Military Tourists will be the death of civilisation unless they are put behind Trumps Wall in Ghetto America.

until now russian military tourists are in moldavia. we knew you. decades suffered under russian commies.

Solomon you are living in the past. The Stalin era is akin to the Neo-Con era currently in the US. Many are in US jails and the rest are mostly debt slaves.

… or maybe the Moldovans will vote against Cold War, and the incoming parlementarians will be promptly bribed by the Dark Throne just like their predecessors were. At some point Putin, the man of steel who is feared by nobody, will have to make up the balance of 15 years of appeasement; or others in Moscow need to do it for him. When it comes to NATO encirclement, the message “no means no” is heard but not believed.

It’d upset a lot of apple carts, but if Moscow would strike specifically at the corrupted elites and their dirty money in Moldova, Georgia etc, the local populations may have some understanding how their rulers brought it upon themselves by selling their countries out. Just remember, once these places join NATO too, it’ll be too late.

Do you know how this 1200 spartans look like? you know the brave Filipinos on that American WWII rotten ship surrounded by modern Chinese vessels trying to hold the position which is totally sinking under them. If I’d be member of their family I’d be worried of them.

The people of Moldova must understand that if they host the US base they will be among the first obliterated in the event of a NATO attack on Russia. Any invasion force entering Russian soil will be nuked and that will overlap the Moldovan border. Couldn’t happen to a stupider people by looks of things. If their politicians have just voted for them to become expendable US cannon fodder and the people are happy to play that role – then they get what they ask for and deserve. Front line ants – for the use of – and extermination for – the world’s bully. The USA. I wonder how much the politicians who voted this through have in their new Swiss bank accounts?. How much were their country and people worth?

I’m sure the people from Moldova know more geography than you to be sure nobody can attack Russian soil, from Moldova border.

I don’t think nukes fired in defence of Russia against an invading NATO will care very much about geographical borders – they will be more interested in eliminating US bases and the territory on which they stand.

Ok I already shat my pants!

you are poor nuker :DDD

You shouldn’t worry. There will be no US military installations in Moldova in ANY case!

I hope you are right. But the article claims the politicians voted for it. I must have read it incorrectly.

the people understood well the reality. tussia occupies part of their country. thats all.

Same shit everywhere in eastern europe. All bitches, except Belarus.

better ask, why no one country want russia?

Transnistrians will wipe out those losers with or without NATO

In fact they already did it during the 90s.

All these ex soviets republics which are being pulled into the USA empire of destruction satellite better watch their bags; USA has been trails of destruction everywhere they have invaded in the last couple years.So, Moldova; hold unto your hats; USA has nothing to offer but weapons/inventing enemies/and watching you fight!

For NATO Transnistria is a huge strategic military problem – as means Russian missiles can be stationed in advanced forward position immediately south of NATO’s key missile line in Poland. But in Geo-political reality, when NATO exploits Albanian ethnicity to control Kosovo, then equally, Russia can exploit Russian ethnicity to control Transnistria…