All over the world, public attention has been riveted on Russia’s reemergence as a military superpower, now that President Vladimir Putin has revealed his new weapon systems in his address to the Federal Assembly on March 2. The US ambitions to attain arms superiority have come to naught. But its anti-Russian policy cannot be reduced to mere attempts to achieve military supremacy. The countries of the former Soviet Union have become a political battlefield, with the US and its allies doing their best to decrease Russia’s influence. 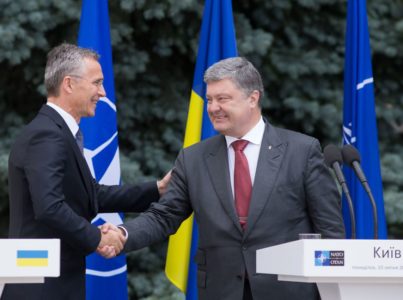 With America’s tacit approval, the GUAM bloc, chaired this year by Moldova, is being revived. Last March, the prime ministers of Georgia, Ukraine, Moldova, and Azerbaijan held a meeting (Baku was represented by its deputy PM) in Kiev. It was the first high level meeting since 2008. The cooperation agreement signed by those foreign ministers last October mentions a free trade zone. The GUAM organization is expected to hold a summit this June. Three of its members – Ukraine, Moldova, and Georgia – act as tools for advancing America’s interests in the region. With the blessing of the US, they signed EU association agreements in 2014. The 2018 foreign-policy priorities list drafted by Moldova includes mention of the US, the Visegrad group, and Japan. According to Chisinau, the countries of the former Soviet Union – long-standing partners with which it shares historical ties – don’t deserve such an honor.

The speakers of parliament from these three countries took part in a security conference in the Moldovan capital titled “Georgia, Moldova and Ukraine: Eastern Partnership and Current Security Challenges,” which was held on March 2 and attended by about 150 senior officials and experts from different countries. Of course US lawmakers and pundits were among the participants. As usual, the Atlantic Council, an American think tank that always supports neo-cons and anything anti-Russian, could not miss the chance to kindle anti-Moscow sentiments. Damon Wilson, its executive vice president, announced that the US was carefully watching over Moldova, Ukraine, and Georgia, claiming that they “wish to become part of our family,” as he put it.

The parliamentary leaders seized the opportunity to issue a joint statement condemning Russia’s military presence in what they believe to be their respective states’ territories. The document was published in English to reflect the pro-Western tilt of the three-state group. They are “concerned profoundly” over Russian troops in Moldova (1,000 troops and 500 peacekeepers stationed in Transnistria) and what they call “occupation” and “intervention” in some parts of Ukraine and Georgia.

As usual, Moscow is blamed for supporting “separatist movements” and other nefarious acts. The speaker of the Georgian parliament, Irakli Kobakhidze, said an anti-Russian alliance is needed, because only if they are united can these nations stand up to the “challenges” coming from Moscow. “We need joint strategies to face Russia’s aggression,” chimed in Andriy Parubiy, the speaker of the Ukrainian Rada. To dispell any doubts about the new groups’ allegiance to NATO, he emphasized that “On this occasion I would like to speak of the threats faced not only by our region, but also by the Euro-Atlantic zone.”

The idea of reviving this alliance that was designed to counter Russia has failed. Azerbaijan refused to take part in any conference with such a clear anti-Russian agenda. That event demonstrated that there is no unity on Russia within the ranks of GUAM. So, GUAM is actually GUM – a group of three states that have been heavily influenced and pressured by the Americans and which are being used to “contain” Russia and forced to serve as NATO springboards.

These three states could maintain friendly relationships with everyone and stick to a neutral policy. Cooperation with the Eurasian Union could benefit their economies. Good relations with Moscow would not hinder their ties with the EU or other institutions or states, including the US. They could simply refrain from taking sides and concentrate on the well-being of their people. But no, they have chosen to adopt an attitude that is hostile to Russia and join those who are confrontational toward Moscow.

On March 2 the three member states actually announced the creation of a new anti-Russian alliance that will negatively affect the political landscape in Eurasia. The immediate objective is to push Russia out and pull the US in. Ukraine is a divided nation, plunged in crisis, and unable to fight its own entrenched corruption. Moldova is facing an election in the fall and the so-called pro-Russian forces are predicted to win. In Georgia, the idea of NATO membership does not have the support of the majority of the population, according to a recent poll. But the governments of these states are pushing the NATO agenda. They coordinate their political activities in order to counter Moscow in any way they can. For instance, they always vote for Ukraine in the PACE, strongly oppose the Nord Stream gas project, and continue to move closer to NATO.

Moldova has announced its decision to buy lethal weapons from NATO members. Its government is chomping at the bit to join “Western institutions.” Ukraine is home to a US naval facility and is scheduled to receive American lethal arms. Tbilisi is pursuing a “more NATO in Georgia and more Georgia in NATO” policy.

What brings them together? All three states are ruled by oligarchs who obstruct reforms. With their economies in dire straits, the ruling elites promise their people paradise if they join the EU and NATO and become good friends of the US. Adopting an anti-Russia policy is their payment for Western aid and support. Their own national interests and sovereignty are being exchanged for crumbs dropped from the master’s table.

Can’t wait for next NATO provocation during or after the World Cup in Russia!

And Ukraine was represented by one of it’s chief Nazis.

“Putin is a chessmaster”. XD.

So, Ukraine will enters NATO and Russia will be forbidden to enter east and south Ukraine !! Well done Putin.

I propose to attack Ukraine and inave east and south when Ukraine was weak, but people though that it was a stupid idea. XD.

Keep loosing and pretend you win.

And also, don’t reproach to NATO to make good cjhoices. Why Putin didn’t overarmed Syria and create an alliance with Syria, Iran and Iraq ???

No. He can’t. Why ??? Because he loves so much netanyahu.

The Guam block revival. Sounds like a 80s band with George Michael. What a joke…. Lets resume, how did the first Guam block ended? Azerbaijan left it an is now heavily courting Moscow. Georgia lost 2008 war in Ossetia it started itself. Ukraine lost Dombas and Crimea. Moldova is still as irrelevant as it was before. All this, without NATO moving a single finger watching his little protege crashed one after the other.

I would bet that Georgia will be the next country to leave and move toward Moscow orbit.

Moldova is in a really weird situation right now: it has a pro-russia president but an anti-russia parliament. Things will probably get sorted out in the next elections tho

Its a bit the same in Georgia, who is still anti Russian in the parliament and the medias but with a government trying to come closer to Moscow.

The solution to all these oligarch regimes? Kill em, kill em all!

Only wish that they all start shit at the same time and all get their asses kicked!

“wish to become part of our family,”

must be one of those families where the drunk, meth addicted father rapes his daughters and sons and beats his wife with a baseball bat.

good luck getting in, we shall soon see how happy they’ll become as members of that “family”.

Sooner or later (if it hasn’t begun already) the Orthodox people of these nations will realize that the West has nothing good in store for them and will bury their old grievances with Russia (many of which were from the Soviet era). I cannot imagine that the price of long-term alliance with the increasingly (militant) secular West will be nothing less than Apostasy from the ancient Orthodox faith of their ancestors. We already see this in Ukraine with the West backing the Schismatics and Uniates against the Ecumenical Orthodox Church in that nation.

People from those countries don’t seem to do anything about their government to stop them from messing around with other countries, attacking or starting a war, just like those here in the US. At this point, I don’t care if any of those countries get nuked by Russia, China, Iran or NK.

they do care but can do nothing about because by living in poverty they have to worry about themselves and their family, it is not that easy to find a way to rebel against a nazi regime. People in those countries dont use much the alternative news fonts so they get lost between the tv propaganda too.

These countries dont want Nordstream 2 because they know once NST would be built..Russia will cut gas to east European countries…and end of the game of these US prostitutes!

Who is prostitute, you tatz?! look at your country, there are tens of millions of prostitures!

we are happy, thet are not enslaved by ruskies. after ww2 we had NO CHOICE and had to “join” ussr´s “friendship”

we entered nato freely, it was not a must. and we are satisfied.

No they will still get gas, but via Germany. Ukraine wants Russian gas to go through Ukraine, so it can steal gas sold to Europe, they have been stealing gas for many years. For the other countries, it’s the bribes the Americans pay to the politicians. As long as Germany holds firm Nordstream 2 will be built, and Germany will make a lot of money selling the gas on to Poland etc. The US wants to control energy supplies to Europe, so it can make lots of money, force the Europeans to continue submitting to the US, and destroy the EU. The US war of terror on Syria is also about US control of energy to Europe.

Hi there. People think before action.!!!! Many countries are invidious on Russia, they try to blame them for everything what happens bad in the world, like us people we all have limits, even government are the same like us. When enough is enough…. If of a war whit Russia will start Nobody’s safe in the entire world. Some of you are thinking that they won’t be affected….??…. ..???all the countries all the city’s all the village’s will pay whit deaths of children, wife’s, parents,.. They are a country so powerful that very little of you know. They can destroy everything what you can IMAGINE.. PLEASE DON’T TRUST Politicians. They are self protective. They won’t think about you about your children about your wife about your mother about you father..e.t.c….they want more power and there’s nothing what they can stop them. If a war will start in your country they will be safe and you will die for them or because of them. While you fight and die they are smiling and eating good food and you will eat beans from a can… Think before you support a war politician… PEACE ON THE WORLD

Many countries are invidious on Russia, they try to blame them for everything what happens bad in the world

you should look inside of your russian spirit and politics and change some terrible things.

And where is Tudor Miron, the great son of Moldavia? :)