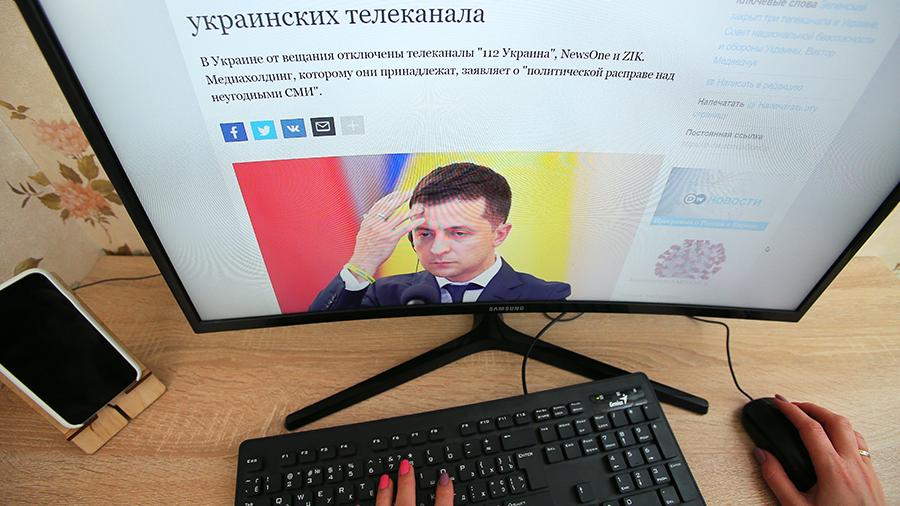 In Ukraine, the chaos of the judicial system and the complete lack of separation of powers became evident in a recent situation.

A district court blocked websites, the prosecutor’s office was caught unaware by the decision and overturned it. The Deputy Interior Minister barged in, after the situation had been largely resolved and decided to revive it to see what’s gone wrong.

Unjustified court decision, are administratively being overturned, and then the highest levels of state authority come in to see what is even happening, since there’s no mechanism to track how “Democracy works.”

On February 25th, the Goloseevsky district court of Kiev enforced its decision to block more than 400 sites on the territory of Ukraine.

The basis is the determination of the investigating judge of the Goloseevsky District Court of Kiev dated on February 4th, 2021, on the grounds of a criminal offense under Part 3 of Art. 190 of the Criminal Code of Ukraine.

“Seizure of intellectual property rights arising from Internet users when using web resources by ordering Internet providers to close access to them,” the statement said.

The plot of the case says that an agricultural businessman Alexander Pan, also known in the field of IT startups, filed a statement with the police at the end of December.

He stated that third parties interfered in his life “using the Internet.”

The banned sites are those that “interfered” in his life and posted defamatory information.

At the same time, examples of articles that are posted on these sites and violate the law are not given – only their addresses are indicated in the document.

It is noteworthy that the list indicated by the plaintiff does not coincide with the one that entered the National Communications Commission.

So, in the court decision there is Reddit, which is not in the list given by Alexander Pan. In particular, Pan’s complaint does not contain either RBC or Live Journal, but they are on the list of the National Communications Service.

In addition, a private person acts as the applicant in the court decision. Although the statement of the National Communications Committee says that the verdict of the Goloseevsky court was sent to them by the investigator of the National Police, as the institution in charge of this case.

Following a short-lived scandal, the prosecutor’s office closed the case, because of which the court in Ukraine ruled to block more than 400 sites, including RBC, LiveJournal, Banki.ru and others, the press secretary of the Kiev city prosecutor’s office Nadezhda Maksimets said.

“On February 25, the procedural leader made a decision to close the specified criminal proceedings and, at the same time, to cancel the seizure of intellectual property rights,” she said.

According to Maksimets, the prosecutor’s office was not notified of the court session at which the decision was made. The supervisory agency has begun an official check in connection with the actions of employees of the Goloseevsky police department during the investigation.

So it was overturned.

But the situation continued, as more officials entered “the fray”.

Deputy Minister of Internal Affairs of the country Anton Gerashchenko on February 25 said that the court’s decision to block 426 sites on the territory of Ukraine, including Live Journal and the site of the Russian edition of RBC, is illegal and will be reviewed. Even though it was already lifted.

“We consider this decision to be absolutely unlimited, illegal and wrong. Therefore, now it will be reviewed and studied by the investigator and the prosecutor,” he said.

Gerashchenko noted that the judge ruled to block the sites after a statement from a citizen who claimed that information was disseminated on these resources that discredited him. A businessman filed a statement with the police, who asked to arrest and block websites.

As such, a court decision was taken that banned 400 sites, and many of them weren’t even on the plaintiffs list.

Then the prosecutor’s office overturned the decision, unblocking the sites.

But then the Deputy Minister of Internal Affairs said that it was wrong to block the sites, and that an investigation was necessary, after the entire situation was reversed, anyway.

This shows that due process in Ukraine is an illusion. The separation of power and the basic principles of law are just formally there, but actually there is no semblance of such an occurrence.

Frankly, US is just a staging post to destabilize Russia by a nexus of Jews and headchoppers. Ukraine historically is an integral part of Russia called Kievan-Rus.

Indeed. Ukraine didn’t exist before 1918. Most ukrops still speak Russian as their first language. Even in the Rada…

The intrepid journalist and historian Pepe Escobar in Asia Times has a warning for US and its NATO puppets.

The b.hole of Europe. The sooner they fall the better. Shameful CIA colony…

“In April 2015, a new set of anti-corruption laws went into effect. (115) State-owned entities with more than 5,000 employees and annual revenue in excess of #3.3 million are required to develop anti-corruption programs (116) The same requirement is made of private companies involved in public procurement involving services worth more than $230,000 or goods valued in excess of $47,000. (117) Private companies must appoint an anti-corruption compliance officer, conduct risk assessments, possess articulated employee codes of conduct, implement monitoring programs, draft whistleblower or complaint mechanisms and protections, provide anti-corruption training to their employees, and include compliance provisions in their third-party contracts. (118) There are no penalties for failure to maintain a compliance program, but the government has indicated it will consider the existence or non-existence of one in determining whether to prosecute. (119)

p. 415 of “International Legal Developments Year in Review: 2015” by the American Bar Association in cooperation with SMU/Dedman School of Law

The address for the ABA is in Chicago; Dedman is right down the street from where I live now in Dallas. I WAS in “compliance” and training to be what would possibly be the Deputy Director of Compliance for the San Francisco Department of Public Health in late 2013 to early 2014; by the time that Ukrainian law was passed, I had been replaced in the role in which I had been by someone named “De La Cruz.” Where now with compliance? Let me tell you…based on the information available at the time I WAS in compliance and after having now found out about this, there does appear to be a racialized pattern involving efforts to retaliate against individuals involved in compliance roles…As in, give up YOUR identity and let the next person have it.

But what then becomes of the “identity” you are permitted to have when you move on? I am politically opposed to assimilation into “transgender” identity. What is my option otherwise?

It would behoove someone to reconsider the last 7 sevens in accordance with this.

I know…I COULD have been “First Lady” if I accepted what they wanted to replace the “President” and then permitted to export. I had ALREADY paid the double taxation (a class of students from 2008-2009 and a SCHOOL of students in 2015). But I don’t do Catholic Lite.

In other words, until I agree to sleep with the African-American police officer to pay the tax for the African-American prosecutor (at whatever level she is now in her political ambition) I am not ALLOWED to be “Jewish.” I AM allowed to be a drug dealer and advocate for my transgender rights to refine CBD oil.

Hey, where is Chechnya on CBD oil?

See, this is ABSOLUTLEY the pattern for the recent stock issue that was just processed in connection with that terrorist attack in san Francisco. Is this what the Harris campaign paid for with my youtube account last Autumn? I even have the article AND the fraudulent documents that were the derivative stock issues set up on the “election” for a 19-year-old and 17-year-old Hispanic women charged with sex trafficking…that older one might even be 20 by now…they were beautiful…what do you think they would look like in a swap with these young “terrorists?” Damn! Did the Biden hedge fund get this one too? Is Kadyrov going to pay off his OFAC liens using these young men? I mean, we COULD have talked about those school shootings, but no one wants to lose that insurance in a criminal prosecution, do they?

It ABSOLUTELY helps the pension scheme that this specific article is in the Guardian. So I DID make my pension contribution to the former Soviet military pension scheme…today: Feb. 26, 2021 at 9:42 am CST. Does that fulfil the obligations set up on ME for someone else’s “New START” when I was in fourth grade?

Feb. 8 was the anniversary on the Department of Energy environmental study of the brine disposal pipeline in Louisiana. I mean, it was called “brine disposal” for a reason, right? So, if you let those Senators from Virginia get some public notices with Texas Senators, does that meet the quota on those FBI girls being downgraded for a swap out with those DOE girls?

Then someone can get carbon offsets for the DOD contract using “military vehicles” that they sent south of the border and then let come back into Texas…hey, they JUST did that, didn’t they? They want to blame it on arctic weather though.

And THEN, well, can it be said that the US FINALLY paid off those Gazprom bonds that came due in September of 2017?

I mean, I had obligations being set up as a “Russian asset” when it was still the Soviet Union, right?