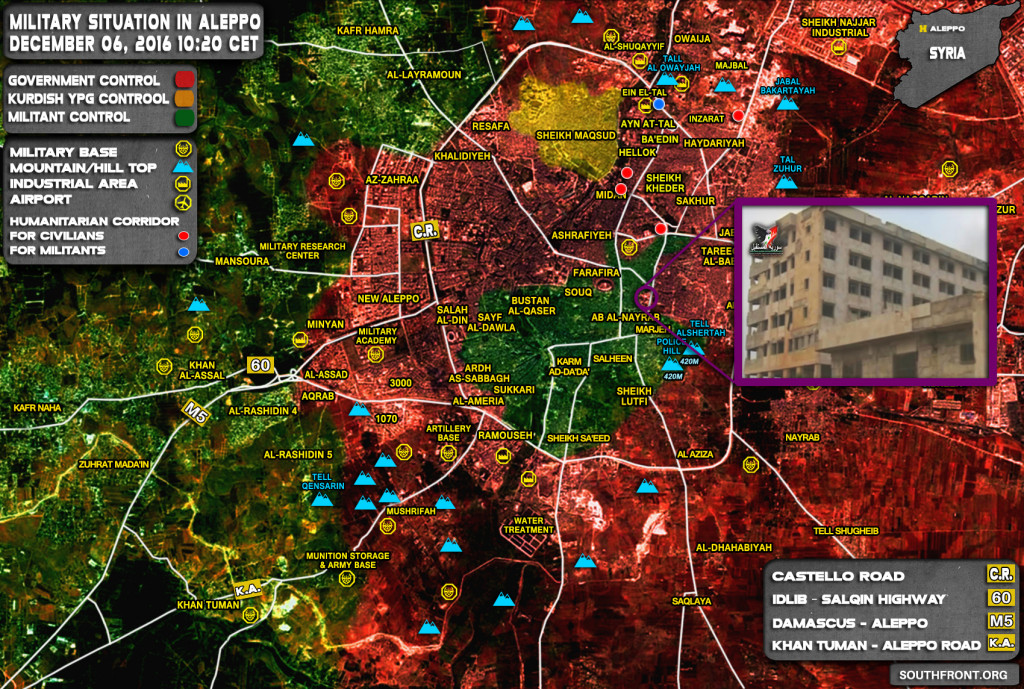 A fresh video from the Youtube channel entitled “Syria Future Agency” (سورية المستقبل) shows the recently liberated area of the National Hospital in the Syrian city of Aleppo. Syrian government forces took control of the area on December 4 and the video appeared on December 5.

The video confirms that before its liberation the hospital had been used by the so-called “moderate opposition” as a military headquarters, a weapon depot and even a prison.

The area with ammunition: 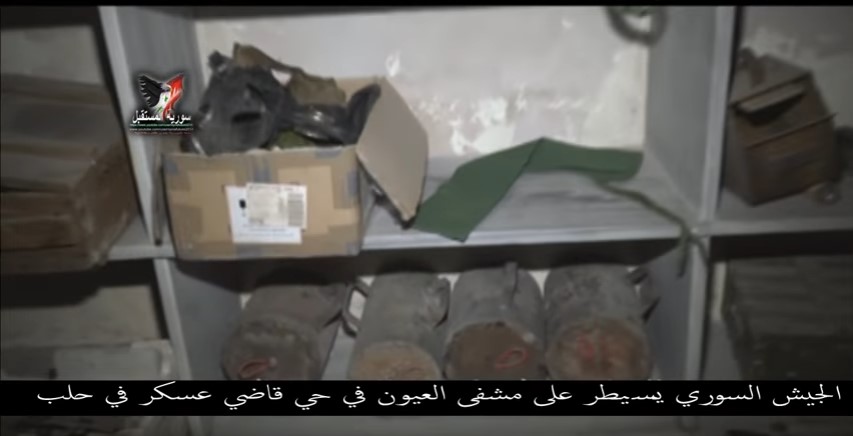 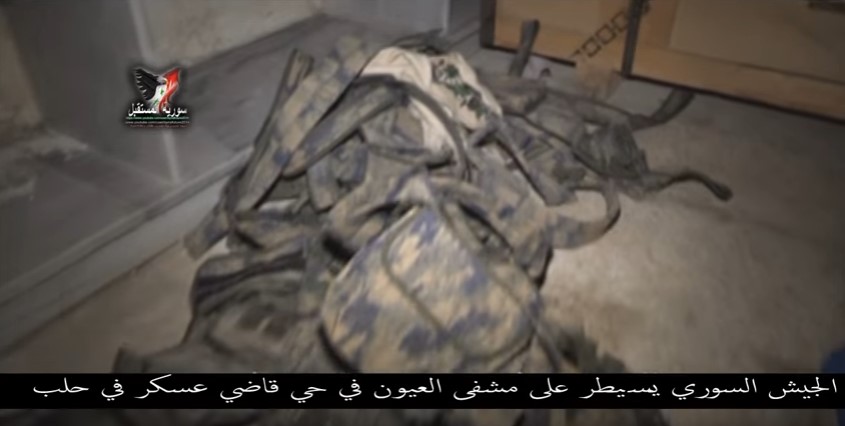 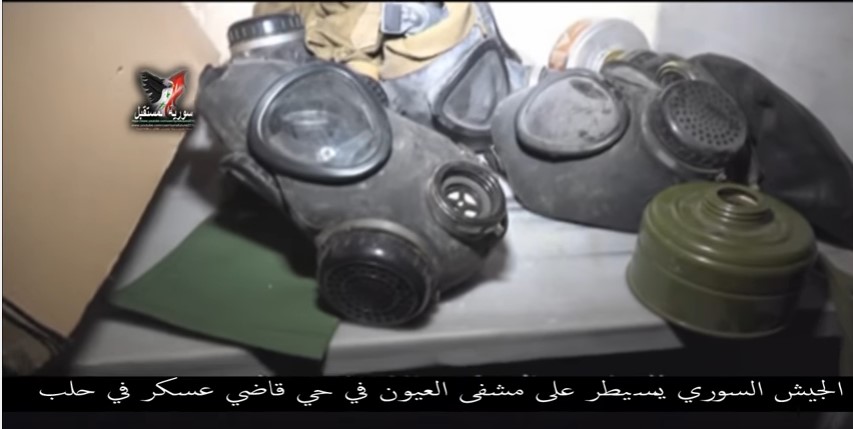 The Syrian army also founds lots of various flags that allow to suggest what militant factions conrolled in the area and the level of their “moderatism”.

A well known flag of the “moderate opposition”: 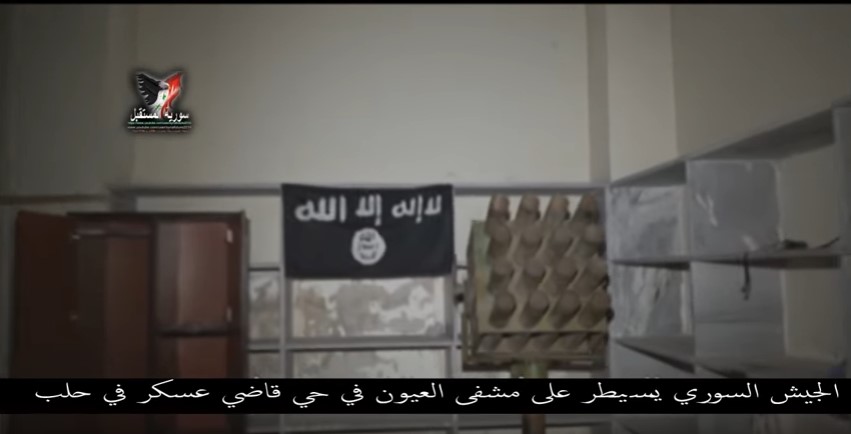 Jaysh al-Islam is a coalition of Islamist and Salafist units. It has well-known ties with Jabhat al-Nusra (the Syrian branch of al-Qaeda): 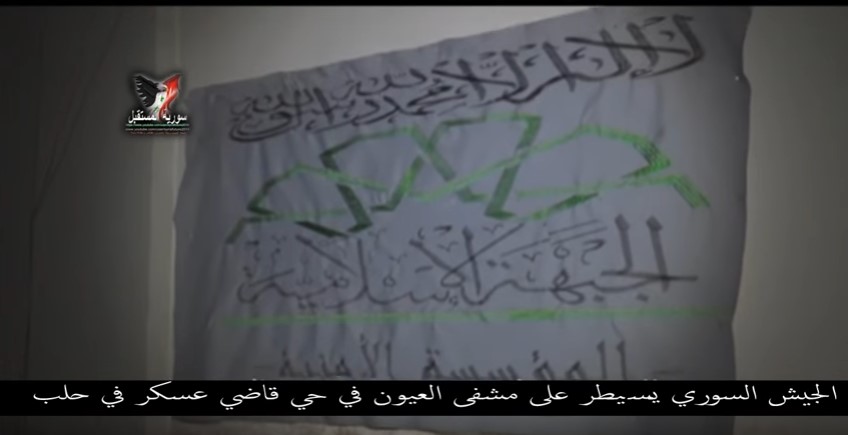 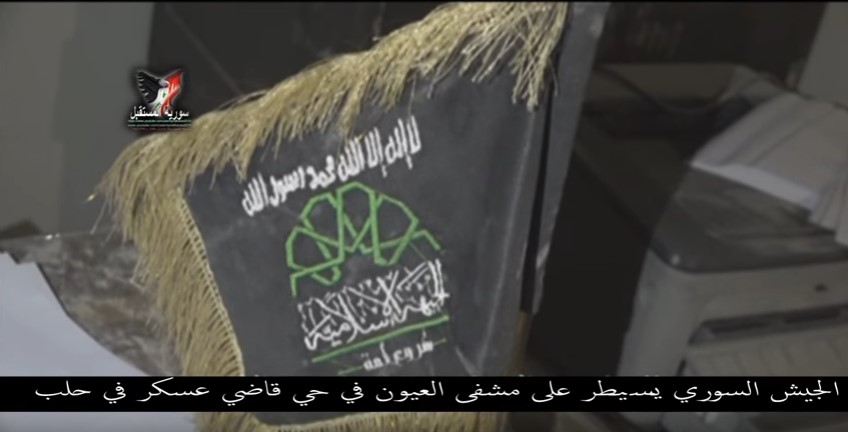 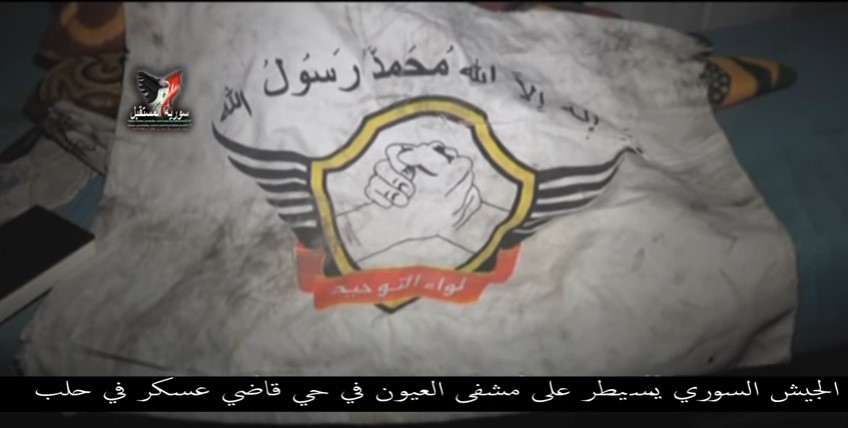 Variations of the Shahada flag are commonly used by various Jabhat al-Nusra-linked factions in Aleppo: 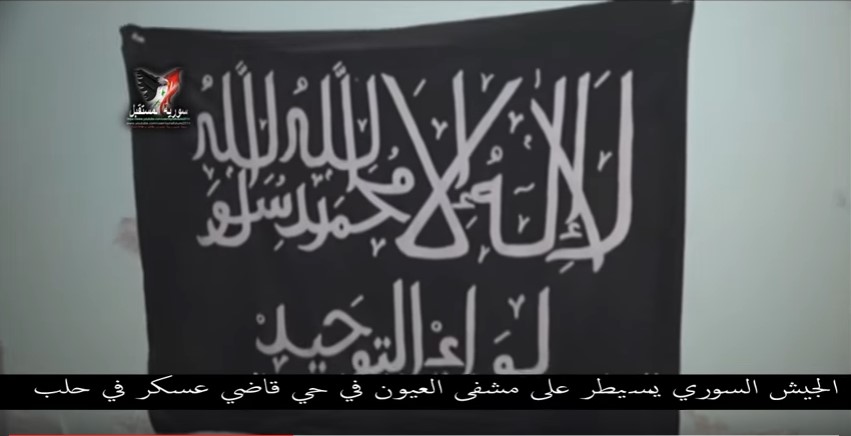 A variation of the Shahada flag commonly used by al-Qaeda

The Levant Front is a coalition of variuos Salafi and Islamic factions allied with Jabhat al-Nusra: 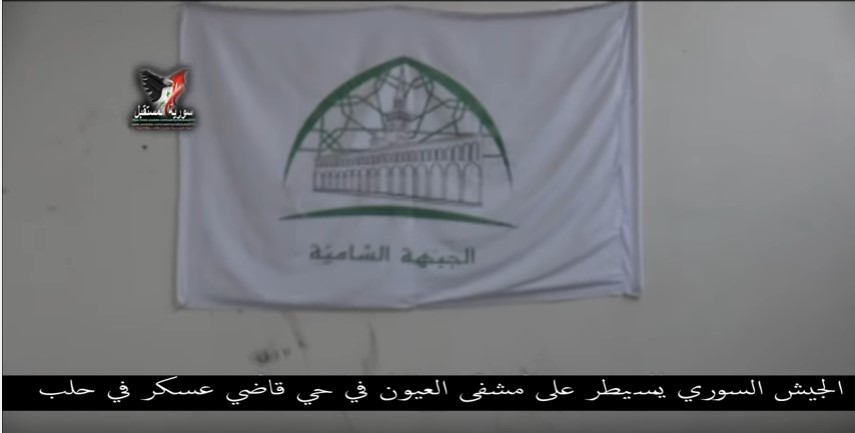 A high number of paper works and ID cards belonging to militants confirms that the hospital used to be a military HQ and even a Sharia court for a long time: 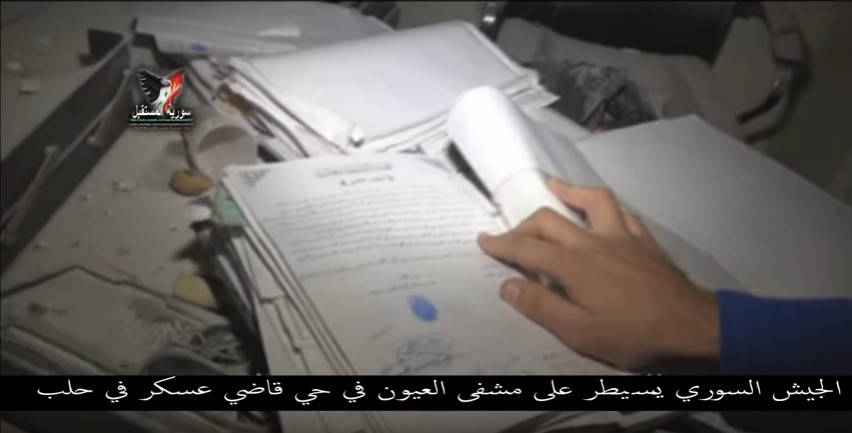 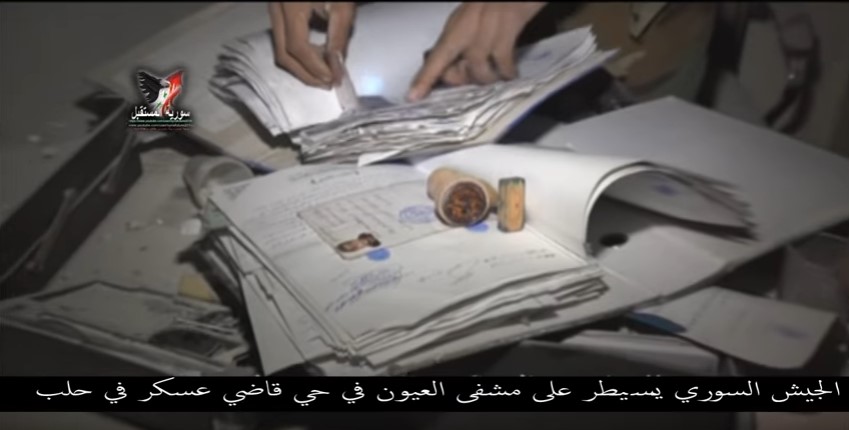 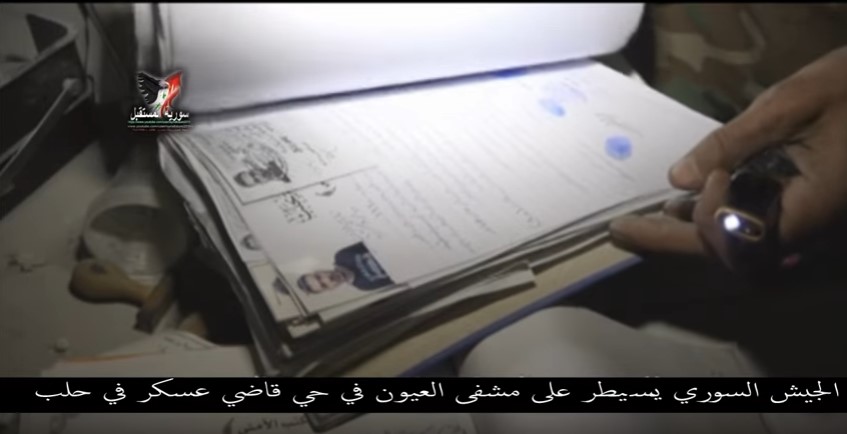 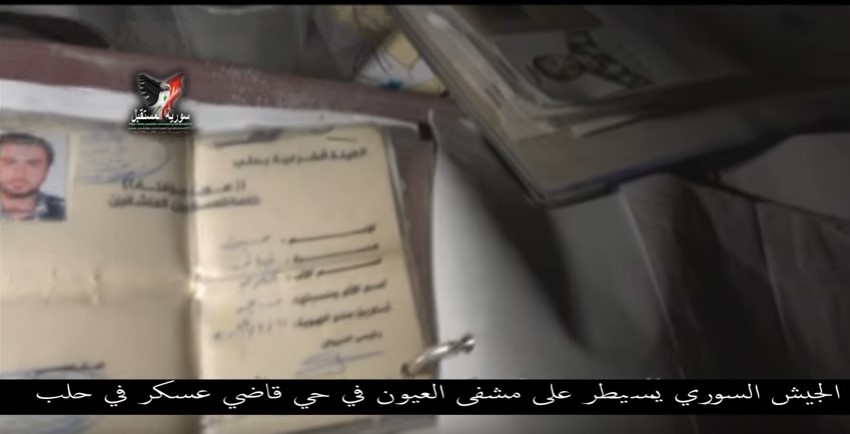 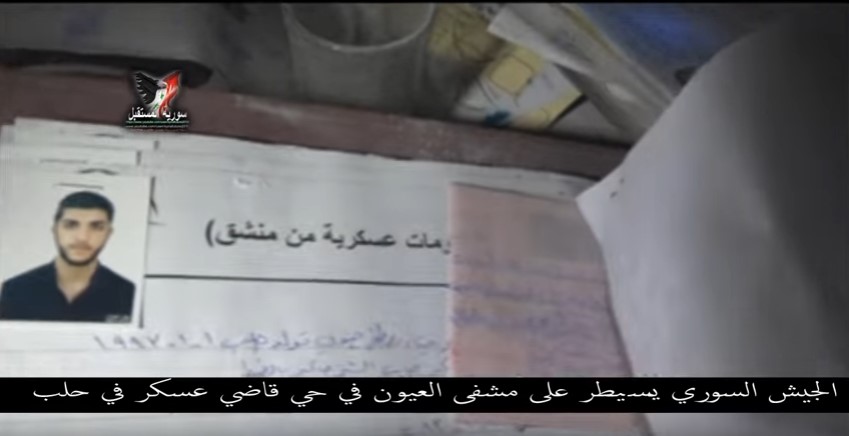 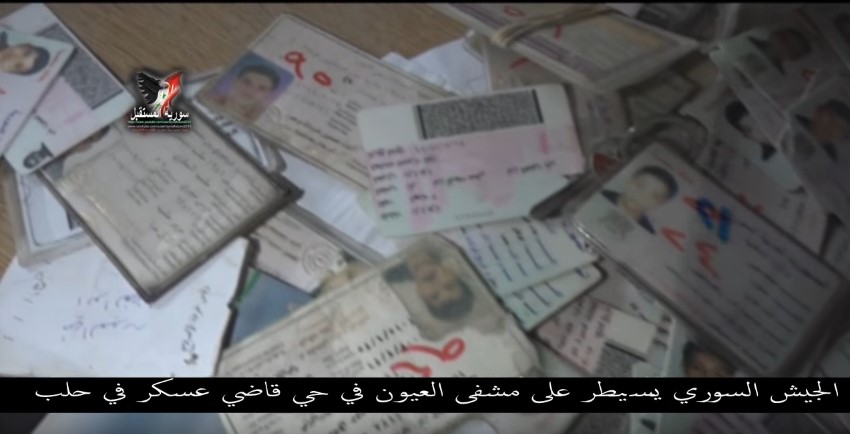 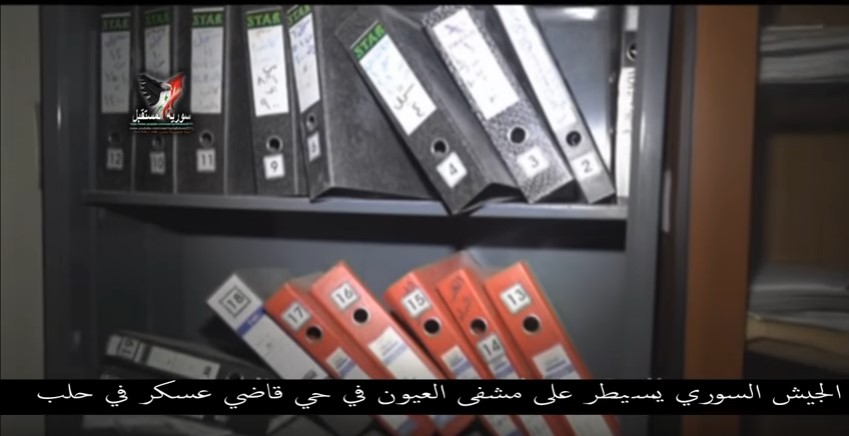 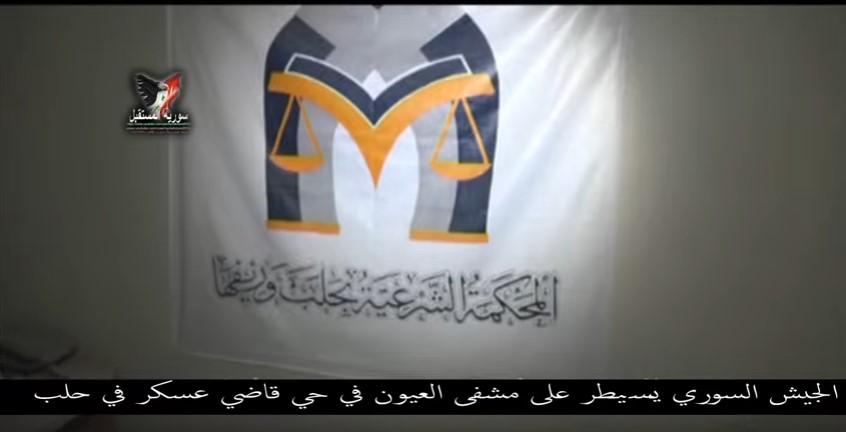 A part of the hospital used to be a prison: 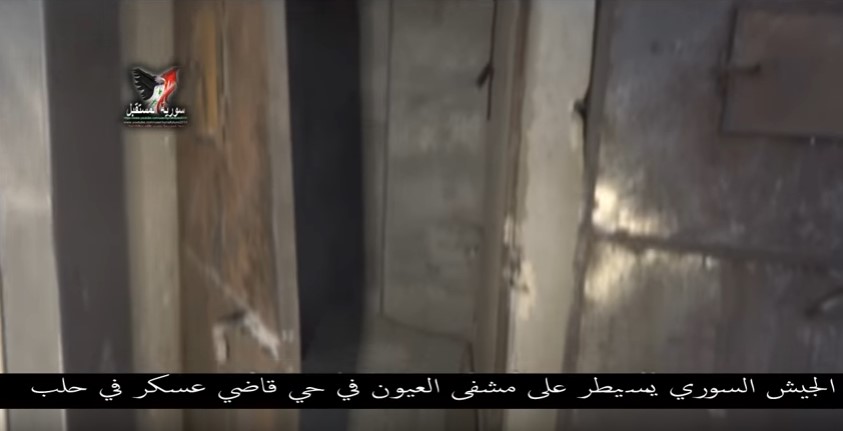 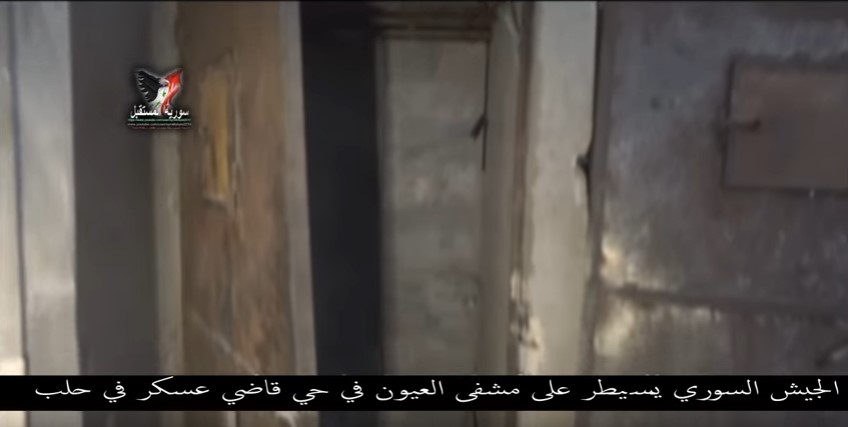 Now it’s clear that at least some mainstream media reports about “Aleppo hospitals” destroyed by the “bloody Assad regime” could be true.

Senator McCain and others like him, should literally be dragged by the short hairs through this entire complex. One more example why certain people should not hold power for long or at all. This is not the first time a hospital has been used by the moderates, for whatever purpose deemed fit. Well done SAA and crew.

McCain??? A man that betrayed his fellow combat pilots in Vietnam? Why would this have an effect on such a low life?

Yes, you mean Reverse ace McCain.. The man who lost two aircraft during training runs… Lost one more during a botched air combat simulation during more training… Then lost his and many others by creating the USS Forrestal fire in 1967 by being an idiot.. That fire cost the lives of hundreds of sailors and airmen, and McCain should have been court martialled if not for his daddy’s involvement in the USS Liberty incident… Then loses his combat aircraft over Vietnam and became a stool pigeon squealing POW… That makes 5 aircraft he personally lost under his tenure and therefore a “reverse ace”….

The man is a traitor to America, and yet the people of Arizona kept him re-elected as a Senator? True justice, especially for the victims of the USS Forrestal fire that he caused, has never been served!

I am no McCain fan but you have your facts wrong on the Forrestal fire. McCain was in the aircraft HIT by the rocket. This video doesn’t mention McCain but he was a A4 pilot.

McCain was in the aircraft that wet fired off a Zumi missile… The facts are that he had to be removed from the Forrestal very quickly after the incident, and was protected by his father Admiral McCain…

Ok. I looked up wet fired and understand what you are talking about. I didn’t know this before looking that up. I had seen the videos of mccain getting out of the A4 after the rocket hit his plane but I didn’t know about the wet start before that.

“McCain crashed 5 jets, plus was responsible for the Forrestal fire. Something made the plane behind McCain fire a rocket, which hit McCain’s external center fuel tank, and caused a fire. McCain panicked, and dropped two bombs into the fire. Surviving crewmen of the USS Forestal and those who investigated the Forrestal fire case reported that McCain deliberately ‘wet-started’ his A-4E Skyhawk to shake up the guy in the F-4 Phantom behind his plane. ‘Wet-starts’, done either deliberately (the starter motor switch allowed kerosene to pool in the engine and give a wet start) or accidentally, shoot a large flame from the tail of the aircraft.’Wet starting’ was a common practice among young ‘hot-dog’ pilots. In McCain’s case, the ‘wet-start”cooked off’ and launched the M34 Zuni rocket from the rear F-4 that punctured the Skyhawk’s fueltank, knocked the M-65 1000 lb bomb off it’s 500 lb rated mount, and touched off the explosions and massive fire.

When the carrier Oriskany came along side, and McCain was put in a chopper and whisked away. McCain was the only Forrestal crewman to be immediately transferred .I have a hunch McCain left for his own safety, because the crew wanted blood.”

Now you know the truth… And it is no wonder that to this day this has been covered up… AND of course it explains so much about McCain that he is under the firm control of the Jewish power elite and do their bidding… For if McCain ever turned away from his masters, they would throw the truth about the Forrestal out there and ruin him..

Blackmail can indeed be a bitch!

And did you honestly think the “History Channel” would tell the real truth? The History Channel has put out so much false propaganda and bullshit history before, that I am surprised that anyone actually watches and believes their garbage…

He should’ve been hung.

Fascinating story that fits some disconnected pieces together better.

And read this part of that report:

On January 16, 2006, WMR reported that according to a US Navy sailor who was aboard the Forrestal on the fateful day of the fire, “McCain and the Forrestal’s skipper, Capt. John K. Beling, were warned about the danger of using M-65 1000-lb. bombs manufactured in 1935, which were deemed too dangerous to use during World War II and, later, on B-52 bombers. The fire from the Zuni missle misfire resulted in the heavy 1000 pound bombs being knocked loose from the pylons of McCain’s A-4 aircraft, which were only designed to hold 500-pound bombs.”

WMR further reported, “The unstable bombs had a 60-second cook-off threshold in a fire situation and this warning was known to both Beling and McCain prior to the disaster.” WMR also cited the potential that McCain’s Navy records were used against him by the neo-cons in control of the Pentagon, “The neo-cons, who have had five years to examine every file within the Department of Defense, have likely accessed documents that could prove embarrassing to McCain, who was on board the USS Forrestal on July 29, 1967, and whose A-4 Skyhawk was struck by an air-toground Zuni missile that had misfired from an F-4 Phantom.”

And this part: WMR has been informed that crewmen aboard the Forrestal have provided additional information about the Forrestal incident. It is believed by many crewmen and those who have investigated the case that McCain deliberately “wet-started” his A-4E to shake up the guy in the plane behind his A-4. “Wet-starts”, done either deliberately or accidentally, shoot a large flame from the tail of the aircraft.

In McCain’s case, the “wet-start” apparently “cooked off” and launched the Zuni rocket from the rear F-4 that touched off the explosions and massive fire. The F-4 pilot was reportedly killed in the conflagration. “Wet starting” was apparently a common practice among young “hot-dog” pilots.

Reverse ace McCain was an idiot, and should never ever have been given a combat aircraft, period, end of story….

And finally… Here is the proof of McCain’s stupidity on the Forrestal… Ask yourself this question… WHY was he, above everyone else, quickly transferred off the Forrestal onto the Oriskany, especially when there were crew members that were badly injured from the fire that should have been transferred first?

Hi AUbrey. Anything to get his butt out of that seat and have tour of the real world circa Dec. 2016, would be of service to humanity. If nothing else, it would get him away from the control panel for a few hours. :P

I would love to see him do a rug dance when confronted with this.

Look at the intelligence they have left behind? I wonder if any of it can be found on the hospital inventory?

Hands up who is actually surprised by this? I for sure wasn’t.

Is this a trick question?

I want a full investigation of this.There are WDM in this hospitals. I think that this is against UN resolutions and several countries Constitutions.