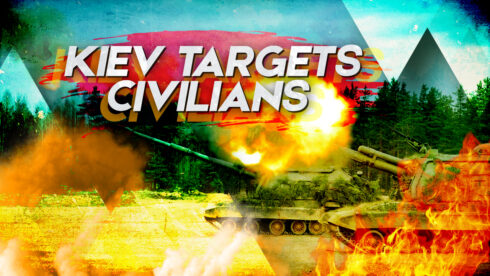 On the morning of March 14, around 11:20 a.m. local time, Ukrainian units struck the center of Donetsk with a Tochka-U tactical missile equipped with cluster munitions. The targets of the strike were not military facilities, but civilians. The nationalist units of the Kiev regime, using cluster munitions, sought to hit as many of the city’s inhabitants in the central part of the city as possible. LINK, LINK, LINK

As a result of the Ukrainian attack, at least 20 civilians were killed. Horrific details were later revealed. The attack was pre-planned and Ukrainian forces attempted to gather as many women as possible through social networks in the center of Donetsk at the time of the attack.

Unlike all the fake news, staged videos and provocations shared by Kiev officials, the mass murder in Donetsk was completely ignored by all the MSM, as well as officials in Kiev and leaders of Western countries.

However, some European media did not lose a chance to gain more hype. In a few days after the attack, the Italian newspaper La Stampa shared a photo from Donetsk on the front page but it was claimed to be made in Kiev. The inscription reads: “Kiev faces the last assault.” Moreover, the headline of the issue was “Massacre” what aimed to attract more readers.

Spokesperson for the Russian Foreign Ministry Mariia Zakharova called the reaction of the West to the massacre in Donetsk an example of extreme cynicism. 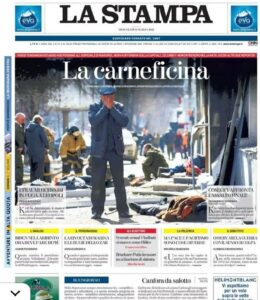 On March 17, the Ukrainian Foreign Ministry decided that four days was enough to forget who was behind the attack. The same photo from Donetsk was shared on the Ministry’s official page on Twitter. But it was used as another tool to demonstrate the terror of war, blaming the aggressor. Surprisingly, the Ukrainian Foreign Ministry did not provide any specific information about who was behind the attack, the number of victims and the fact that it was a planned inhumane provocation carried out by Kiev forces.

You may not understand the language, but the grief on the faces of these people is clear to everyone.

I have actually seen some of this footage from Donetsk indirectly presented as Russian aggression in pro ukr news. Its absolutely psychotic.

Same as that “Russian tank” driving over a civilian car in Kiev, endlessly repeated all over western media and social networks for days… and it wasn’t Russian, it wasn’t even a tank: Ukrainian Strela-10 , with Ukrainian crew, in Kiev. Eventually even Ukro authorities admitted it was their own (by “mistake”) but only after exploited it so much. And no one in the West even bothered to rescind this fake news, some actually even keep repeating “Russian tank” driving over a civilian car!

Yeah thats incredible . Even if Zelenko takes too much cocaine and directly says : “ya know what, I admit we kill our own people for propaganda and for fun ha ha and yes we destroyed that theatre! fuck it!” western media would still blame Russia.

Ukkropbots, i don’t feel so good. Our best trained fighters stationed in Mariupol are already caught praising Chechen leadership on camera and 50+ dead Ukkrop soldiers in Mykolaev are being tossed into mass graves after a Kalibr missile strike. CIA if you are reading this, tell me when to carry out the anthrax false flag, we don’t have any fighting men left over here. Turns out our best fighters are LARPERS who can only shoot civies. Where is NATO, where is Steiner? Send HELP.

Has anyone heard of this? https://vm.tiktok.com/ZMLaeREWm/

Their NATO masters/teachers must be so proud.

The Truth
Reply to  Washington DCorruption

Nothing new for them – Maidan Snipers.

Lets face it we are compulsive liars.