Russian military reporters shared the video showing the destroyed Caesar self-propelled howitzer supplied by France to the Armed Forces of Ukraine. This is the first Caesar which destruction was confirmed.

The CAESAR (Camion Équipé d’un Système d’Artillerie) is a French self-propelled 155 mm self-propelled howitzer. Manufactured by the partly state-owned arms maker Nexter Systems, the CAESAR is mounted on a six-wheeled truck chassis. The howitzer can fire up to six rounds per minute and has a firing range of around 42 kilometers using ERFB [extended range, full bore] shells, and up to 55 kilometers using rocket assisted shells. 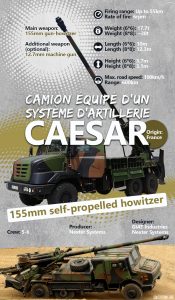 French President Emmanuel Macron said that France will supply Ukraine with several CAESAR self-propelled howitzers in an interview with Ouest-France that was published on April 22.

In June, France24 TV channel reported that Paris has already transferred 18 CAESAR self-propelled artillery mounts from the storage bases of the French army to Kiev. France recently vowed to supply the country with additional six CAESAR howitzers as well as with a “significant number” of VAB armored personnel carriers.

On June 22, French lawyer and politician Regis de Castelnau revealed that two CAESAR howitzers had fallen into the hands of the Russian military. Back then, Regis said that the Russian military moved the howitzers to Uralvagonzavod plant in Nizhny Tagil, which develops and produces battle tanks, armored vehicles and howitzers, to be studied. 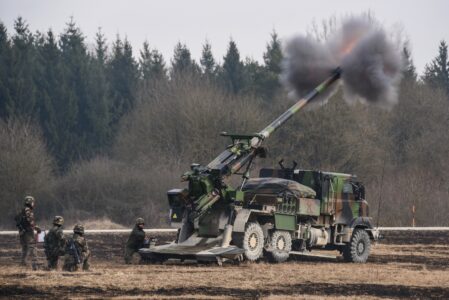 French Caesar howitzers are actively used by the Armed Forces of Ukraine on the front lines in Eastern Ukraine. However, they do not only hit enemy military targets but they are also used to shell civilians in the DPR and LPR.

One of the AFU attacks with CAESARs was recorded on June 12 in the center of Donetsk. LINK The DPR representative in the JCCCP confirmed that the strikes were made by the French self-propelled howitzer CAESAR with a caliber of 155 mm. The attack was ordered by Ukrainian Colonel Roman Vladimirovich Kachur, commander of the 55th Separate Artillery Brigade of the Armed Forces of Ukraine. As a result of shelling in the Kirovsky district of Donetsk, an elderly woman born in 1938 was injured.

There you go… France’s million TAX EUROS going up in smoke, literally. Micron should go, he must resign. Now.

Joe Bidet Is A Senile Pedo
Reply to  Pierre

Given that he was not legitimately elected in the first place I can’t see the queer bastard resigning soon.

Nobody
Reply to  Pierre

All this money could be used to feed hundreds, if not thousand or more… And its being wasted in mere seconds, all to support someone else’s agenda.. Resignation is too easy for criminals like him and the other NATO worshippers.. Send them all to hell where they belong.

I had a dream last night a nuke was dropped on france and it was erased off the map. vietnam will never forget the atrocities committed by french in vietnam.

Thank you Marcon for providing Russia with samples of your military tech.

This gives the Russian engineers a unique opportunity to figure out all of the systems weaknesses and vulnerabilities.

This way they can destroy them with much less effort on the battlefield.

Russian engineers? You mean after they finish fixing all the shitty Soviet tanks they just dug up to send to Ukraine?

The fact, that you come here under 10 different identities tells me, that you must be very upset.

I understand that your world is crashing and your Ukro-Nazi child rapist heroes are getting hunted down. This must be very soul crushing for you…:D

Not sure how are you going to cope, once today’s Ukraine becomes former Ukraine? Hahahahahahahahaha!!

The fact that you still think that the shitty Russian army can do anything with captured howitzers shows what a fucking moron you are. You have no clue how to use your own fucking weapons. All your Russian tanks are being paraded around in Kiev and Poland.

Last edited 18 days ago by Muhammad your Prophet
-8
Reply

Oh..you mean the Ukrainian equipment presented as Russian with the fake Z painted on?

There was so much of it, they were unable to fit it in the expo area. Hahahahahahaha!!!

The Putin cockroaches stole so much technology from around the world for their crappy Skolkovo project that it never crossed their moronic brains that they actually had to learn how to use it. Now all that technology is being dumped and destroyed in Ukraine and it looks like Russia has joined Argentina as one of the world’s shittiest armies.

Leonidas
Reply to  Muhammad your Prophet

By the way, can as a Prophet include some weather forecasts in your comments?

Soldaat
Reply to  Muhammad your Prophet

russia is a space world power and shouldn’t be able to analyze a howitzer of the frog eaters? you’re a much bigger idiot than I thought. if the hasbara needs such dregs as you, then you all whistle out of the last hole lol

You mean the complete pigsty of the Russian section in the ISS. The race for the moon is over, freak. USA won that one.

TomB.
Reply to  Z FOR VICTORY

every hasbaratroll has many accounts, because it is not easy for the hasbara to recruit enough immoral, characterless and immoral scum from the streets. that’s why they have a lot of accounts, but doesn’t change anything about their mental shit that they secrete.

This Putin terrorist cockroach is crying now. Somebody hand him a napkin so he can blow his nose.

I have used Tampax for lgbt profit

docsamus
Reply to  Z FOR VICTORY

Do you think they need a sample? Surely they can get this through other means?

The shitty Russian army finally destroyed a Caesar howitzer after two months? Are the Putin cockroaches boasting about it? At that rate the Putin terrorists might be able to destroy all the French Caesar howitzers by Christmas of next year.

You have spoken like a true keyboard military analyst from your mom’s basement.

Now take your psychiatric meds and go make some LGBTQ props for the gay pride parade (your specialty).

You have spoken like a true deranged terrorist freak who’s still in denial about the fact that the shitty Russian army is complete absolute garbage and your crappy military is the laughingstock of the entire workd.

Last edited 18 days ago by Muhammad your Prophet
-10
Reply

You need to change your LGBTQ+++ repertoar, as it makes you sound even dumber than you really are…:D

It looks like Z for Victory wants to compete with yuri as Southfront’s biggest faggot. Who knew you were projecting all this time?

lol you moron. if this is so, than hows possible that russia controls now 25% of ukraine? and soon more to come with whole donezk and after that odessa. what is the hiring requirement at your hasbara recruiting office? a vacuum between the ears? There are many hasbaratrolles on the www, but there are probably nowhere as bad, pathetic and amateurish as here.

Macron is a true friend of Russia. Handing over Caesars free or discounted.

FSB reported Ukraine’s attempt to hijack Russian combat aircraft The secret services of NATO and Ukraine offered Russian military pilots money and citizenship of one of the European countries for a flight to the airfields of the Armed Forces of Ukraine. The FSB said that the attempted hijacking had been stopped, those involved had been identified.

The military intelligence of Ukraine tried to recruit Russian military pilots, promising them money and citizenship of one of the EU countries, so that they would fly on combat aircraft to airfields controlled by the Armed Forces of Ukraine, the Russian FSB reported.

“The operation of the Main Intelligence Directorate of the Ministry of Defense of Ukraine to hijack combat aircraft, supervised by NATO special services, was opened and stopped,” the message emphasizes.

The FSB claims that they have identified the involved employees of the Ukrainian special services and their “accomplices”. As emphasized in the service, they acted “on behalf of the political leadership of their country.”

The SBU planned to hijack a Su-24 bomber, a Su-34 fighter and a Tu-22 M3 supersonic missile carrier from Russia, according to the FSB.

This is not the first report about the suppression of the actions of intelligence of Ukraine. In mid-July, the FSB reported the detention of a citizen of Ukraine and the Luhansk People’s Republic, born in 1965. According to the department, in 2017-2018 he participated in the conflict in Donbass, and upon his return to Ukraine, he was recruited by the SBU, after which, on the instructions of Kyiv, he collected data on the movement of military equipment in the Rostov region. He was given a warning about the inadmissibility of actions that create conditions for a crime under the article on espionage (276 of the Criminal Code).

Z FOR VICTORY
Reply to  Iren

It just shows how desperate the NATO war criminals are getting.

They need to get their hands on some Russian military tech, or they know they are finished.

you must be yuri from lvov or Kansas—-you like suck ukie sausage?