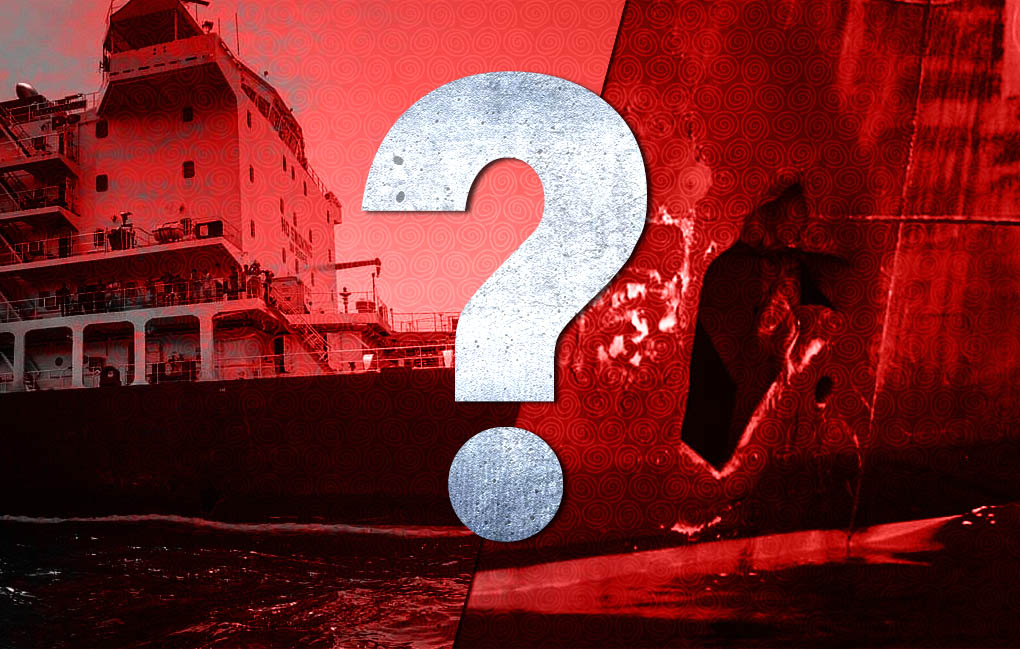 On June 13th, two tankers were attacked in the Gulf of Oman, with both ships suffering some damage and their crews being evacuated. The US Navy said it received a call from the Front Altair saying it had been attacked at 03:12 GMT, when it was 19 nautical miles (35km) south of Iran’s coast, while the Kokuka Courageous reported being hit at 04:00, 21 nautical miles off Iran.

The US immediately after the incident blamed Iran for what had happened, saying that it was an Iranian limpet mine.

The US military said a US aircraft observed an Iranian Islamic Revolution Guard Corps (IRGC) Hendijan class patrol boat and several IRGC fast attack craft in the vicinity of the Front Altair. Initially a grainy black and white video was uploaded, allegedly showing that Iran carried out the attack. 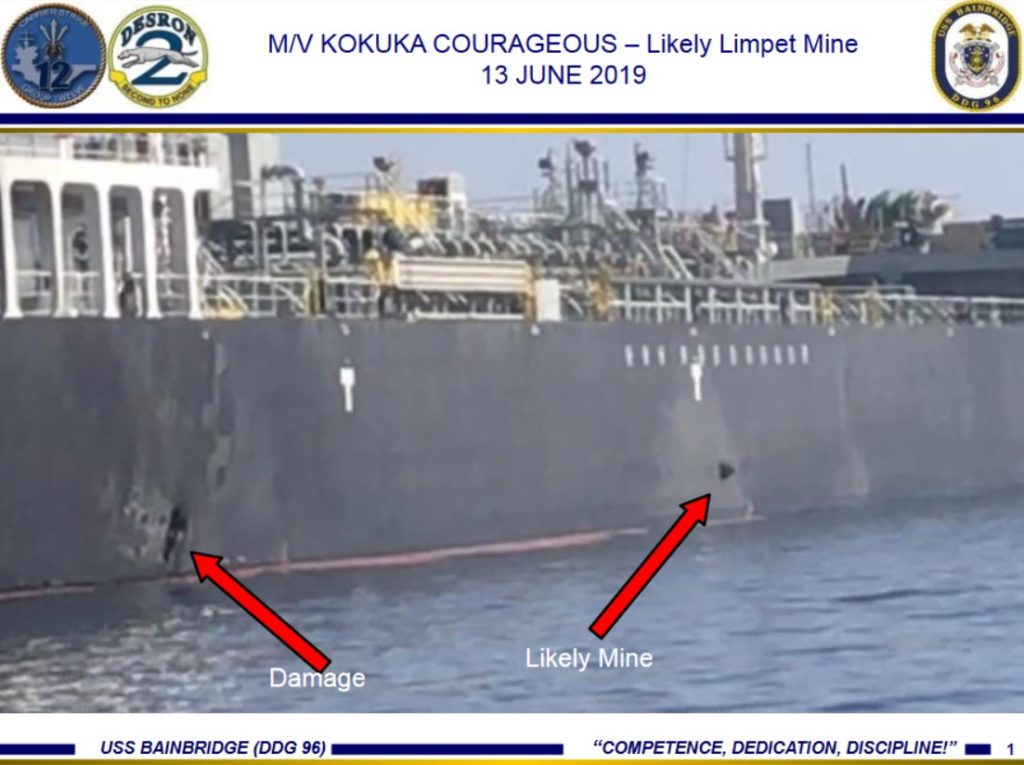 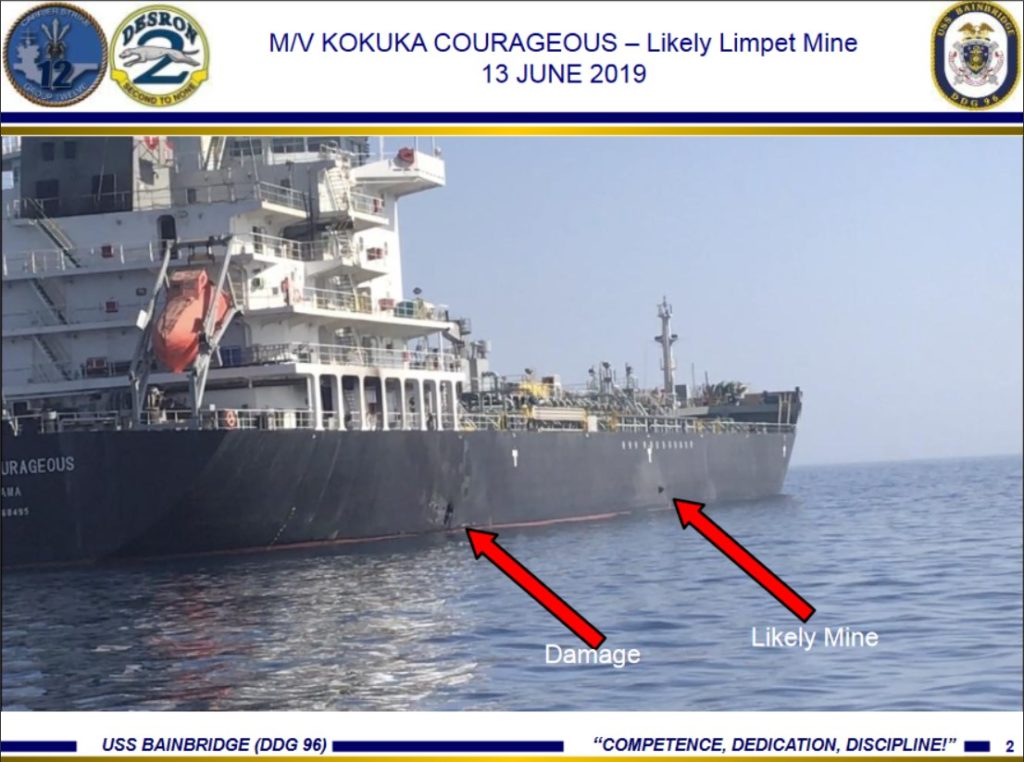 On June 17th, the Pentagon released two reports – one providing a timeline of the incident, while the other one provided more photographs allegedly showing that the Iranians were guilty.

(U.S. Department of Defense via AP) 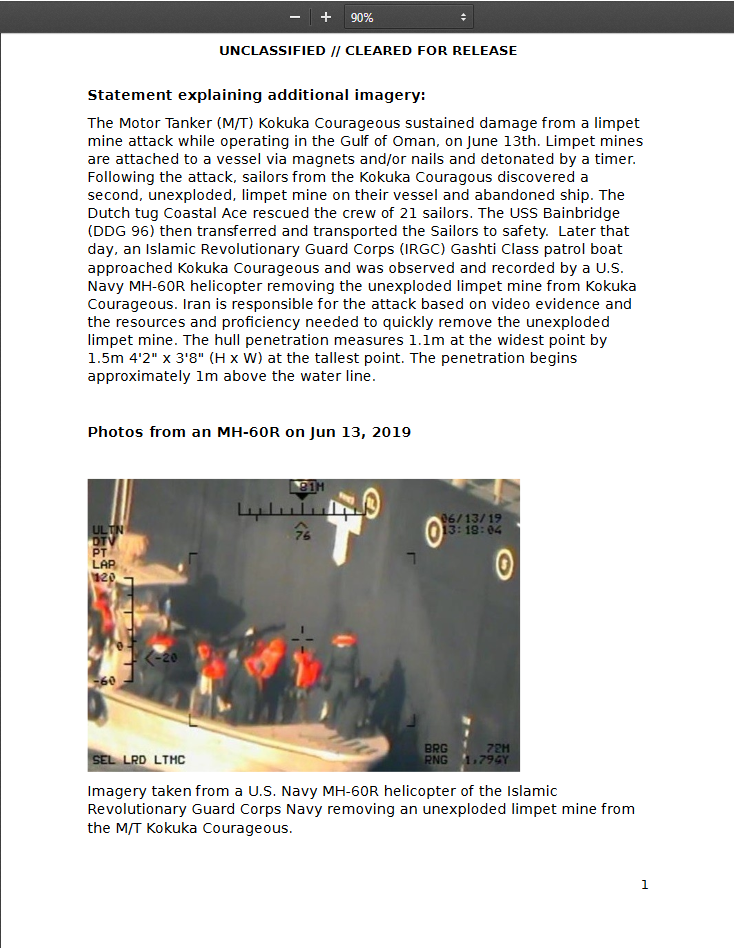 Other proof were separate pictures of the damages on the Kokuka Courages, one of the two attacked tankers. 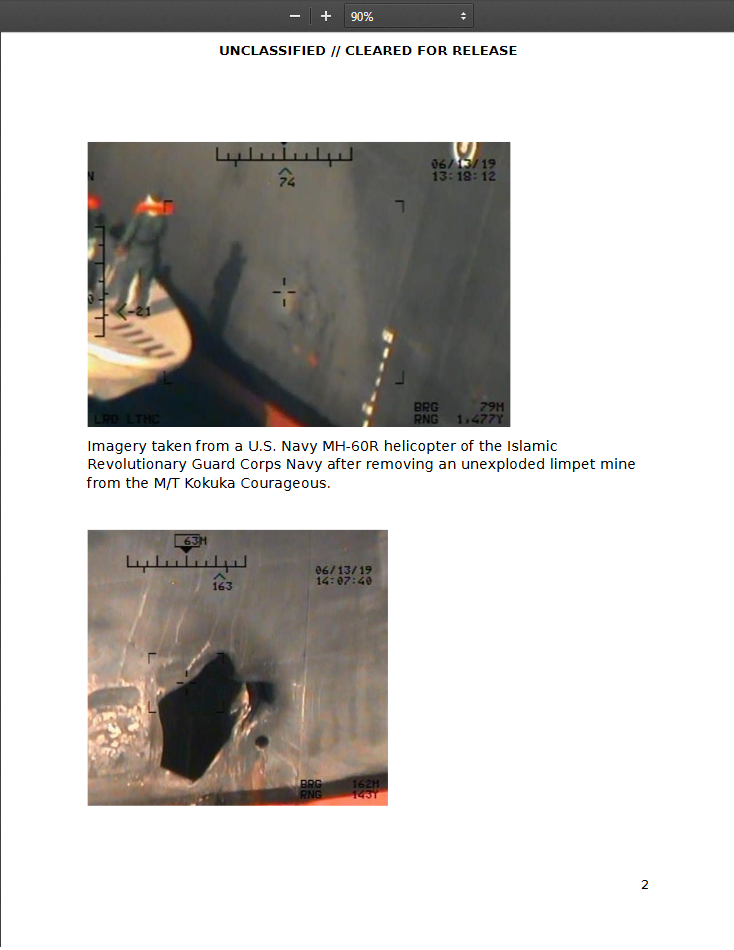 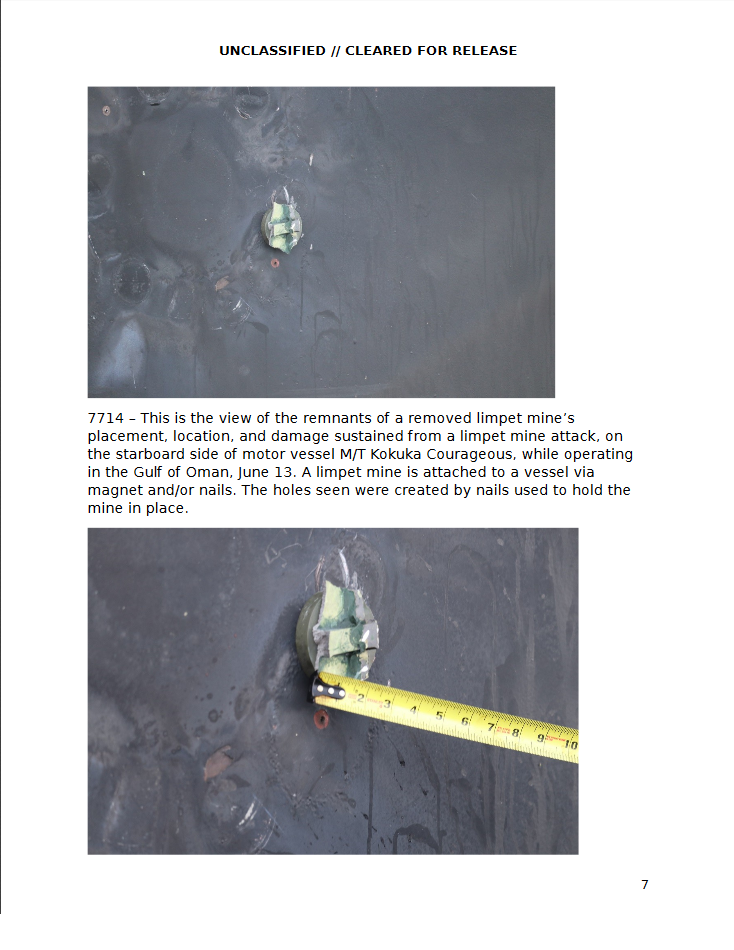 There was really no conclusive evidence that the damages were caused by a mine, and even if it was a mine that Iran had set it in the Gulf of Oman.

The company did not speculate on the cause of the damage to the Kokuka Courageous. But the president of the vessel’s owner, Japanese firm Kokuka Sangyo, reported that it was hit by two explosions in the space of three hours before the crew were evacuated.

Yutaka Katada told reporters on 14 June that he believed the tanker was hit by a “flying object”.

“The crew told us something came flying at the ship, and they found a hole,” he said. “Then some crew witnessed the second shot.”

It is uncertain if whether Iran has some special naval mines that actually come flying through the skies to attack an “enemy” ship, but who knows, really.

At the same time, the US military accused Iran of attempting to shoot down a US MQ-9 Reaper armed drone with a surface-to-air missile in an attempt to disrupt surveillance of one of the tankers that was attacked, the Kokuka Courageous.

So, the Front Altair and the Kokuka Courages were surely not the only tankers in the Persian Gulf, or even in the Gulf of Oman at that time, but the MQ-9 was surveilling both of them for some reason, and it was there to allegedly film the Iranian actions, together with a Navy MH-60R Seahawk. The MH-60R Seahawk’s weaponry also includes Mk-54 air-launched torpedoes and Hellfire missiles.

This information could allow to speculate on another version of events, as colonelcassad blog has already done.

According to these speculations, the holes in the ships may have been made by an air-to-surface missile of some sort. For example, a Hellfire missile, which both the MQ-9 Reaper and the MH-60R Seahawk are usually armed with. 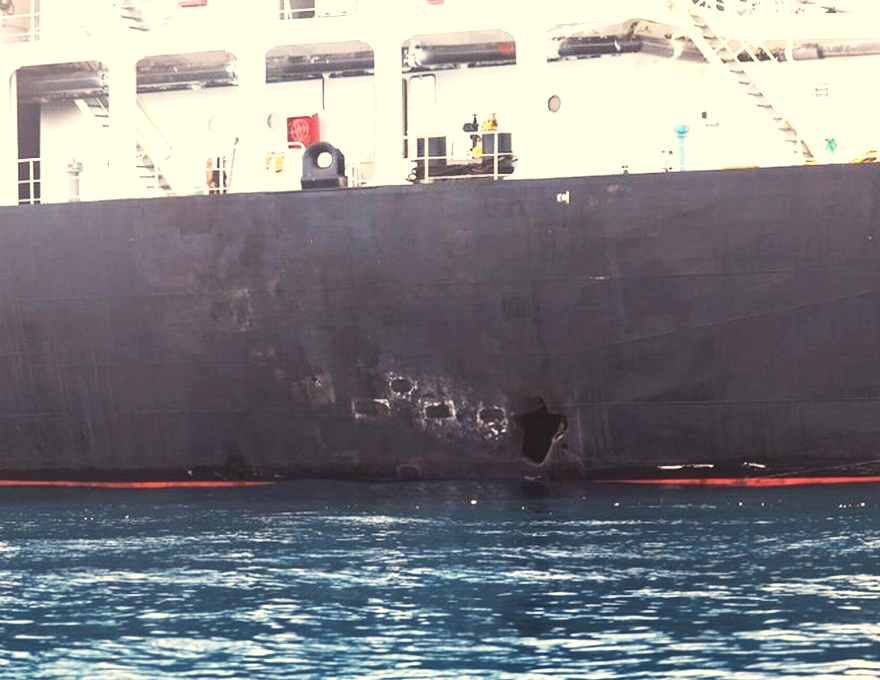 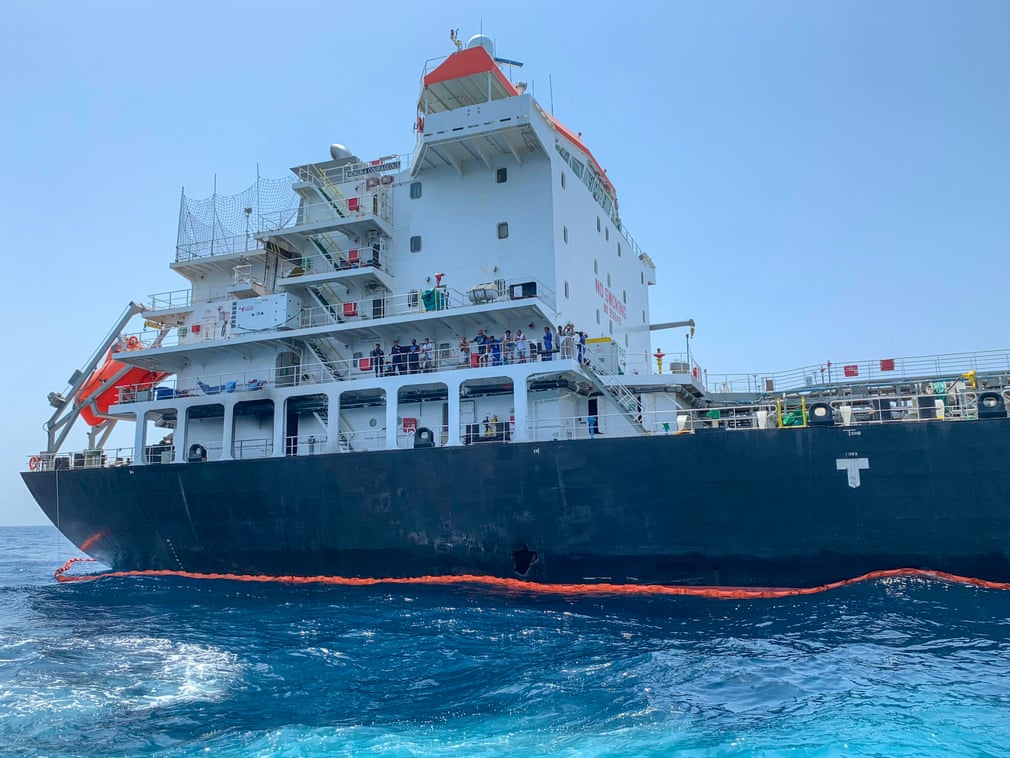 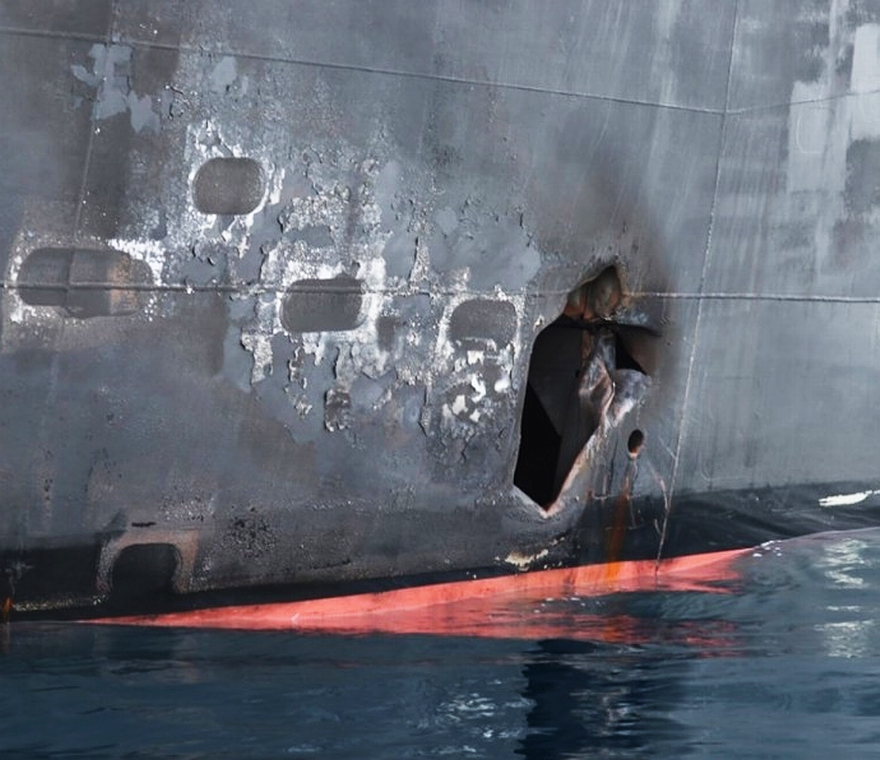 It was unlikely a torpedo attack, since the damage is above the waterline. Speculations circulating in social media also alleged that Iran has the wreckage of an American Hellfire rocket, which is the standard armament of the MQ-9 Reaper UAV.

This is further reinforced by the crew and captain of the Kokuka Courageous saw flying objects moving towards the ship.

There is a video of the US Air Force shooting the old USS Buchanan destroyer with Harpoon anti-ship missiles, as well as Hellfire missiles. It clearly shows damages caused to the ship’s hull by the Hellfire missiles, at approximately 2 minutes and 10 seconds.

Provided are also screenshots from the video:

Similar to the damages of the Kokuka Courageous, the footage shows a small hole with torn edges curved towards the inside.

There is no conclusive evidence to prove any of this (as well as the US version), but one may consider the following:

This is just one of the versions that may have been created using the holes in the Iranian limpet mine attack. However, it seems that the mainstream media and US regional allies like Saudi Arabia and Israel are satisfied with the provided “evidence” and already decided that Iran was the side behind the tankers incident.

U.S. CENTCOM actually did give a reasonable explanation for the above the waterline issue. They said the IRGC attached the mines on the tankers at night in the open sea while they were in transit.

There are other explanations but this would mean that the IRGC was able to infiltrate another country’s port a month earlier to place mines at the waterline and then place explosives on the side of two tankers while they were in motion totally undetected. The U.S. navy on the other hand were unable to document the existence of an unexploded mine despite the fact that the ship was sitting in the water for 10hrs and even after the IRGC boat arrived they still were not able to get a decent photograph of them removing it.

This shows a huge competency gap in the Persian Gulf between the IRGC and the U.S. navy, oh, and we did have the boat that ran out of gas and drifted into Iranian waters. If we start a war, I do not believe things are going to end well for my country. Way too much arrogance.

a limpet mine needs to be under water when activated. the water mass directs the explosion to the hull. a limpet mine exploding above water level would not be directed and would not cause a hole in the hull. now a missile is another story.

I’m guessing that some jerk fired missiles, but didn’t arm them, or it was planned, and the missiles had no warheads. Either way it’s obviously an American crime.

The Hellfire missile damage in the video of the decommissioned ship being destroyed looks to me exactly the same as in the tanker hull.

I never cease to be amazed that the US and UK expect everyone to believe their childish stories about Iran and Russia. :)

If the US navy really wants a flase flag, it would surely be better to attack their own ships and kill a few US sailors for effect.

Whoops, I forgot the Gulf on Tonkin False Flag and the US Liberty False Flag in concert with Israel.

They failed as well :)

“attached the mines on the tankers at night in the open sea while they were in transit.”

So they are suggesting and you believe that ships are lower in the water at sea, than they are in port? But then the ships when pictured always in the Persian Gulf and never in port? Most freighter type vessels travel at about 8 knots about 15kph or 10 mph. Try and stick a fridge magnet on a car traveling at 15kph? The other small item the people at the Pentagram don’t tell you, is the barnacles would shred the diver, just before the prop sucked him in and finished him off. The damage to the ship is obviously impact damage, it’s nothing like the kind of hole a bomb makes.

It saddens me that ordinary people are so stupid that they believe such preposterous stories.

This is almost certainly a false flag operation by the Saudi regime. Emboldened by the muted response in the West to their murder of Kashoggi, they are trying to get US to attack Iran.

Looks very much like the alternative is a slam dunk. Then again I would imagine all alternatives to what Yanki media and propaganda outlets claim would also register as a Slam Dunk. It all began with the their own sinking of US Maine in Havana 125 years ago and blaming the Spaniards for it. More recently the Gulf of Tonkin led to a full Yanki onslaught against Vietnam. Yanki A/F supremo Curtis LeMay claimed they would bomb the Viet-Cong and their country back into the stone age. They did manage to drop 7.500,000 tons of high explosive on Vietnam. the equivalent of 320 Hiroshima nuclear bombs. Yet they still got their arse handed to them on a plate as they scrambled like destitute monkeys hanging on to the landing struts of Huey choppers as they made the most unceremonious exit from a war zone of their own making. While I’m sure the Iranians are well capable of repeating the beating, I would much prefer if Uncle Fukin Sami would just fuck off back home. But I suppose they won’t, so heres looking at 50,000 poor red-necks being sent home in body bags and 3 times that amount arriving home beyond repair. Of course all shareholders of mic stock will increase their wealth 4 fold.

As I understand it, the Iranian rescue vessel moored alongside the tanker Kokuka Courageous, roughly mid-way between the two imact locations shown, and used a MOORING MAGNET to hold its position during loading. The US imagery shows this attachment being removed – standard practice for boarding parties from small vessels, RHIBs, Zodiacs etc to moor onto smooth hull of larger vessels

USA insane intelligence which is regard world terrorist best by,Bush,Obama and Trump are claiming that sea mines jump.Weird intelligence what a joke.

The reality is if Iran wants it can sink any ship if it cant sell oil.Not this rubbish lies.Iran is not scared or does not owes USANATO any explanation.Deal or die for economic sabotage.Trump is so spoil he wants to be treat special forcing others to call after creating world shit.Never ever call Trump.He does this to Kim and make it world news and betray Kim of North Korea.

SouthFront, it was not a MQ-9 Reaper! it was a MQ-4C Triton! The difference is that the triton is NOT an attack drone! Im not saying Iran doesnt have the right to shoot it down, but getting the story right is important! Everyone on this site is going to assume (as they always do) that this drone was sent for offensive purposes!

Does anyone else find the pattern of welded patches close to the mine damage interesting?

Americunt are liars and arseholes, NUFF SAID! Enjoy the real hiding the Saudis are getting in Yemen;