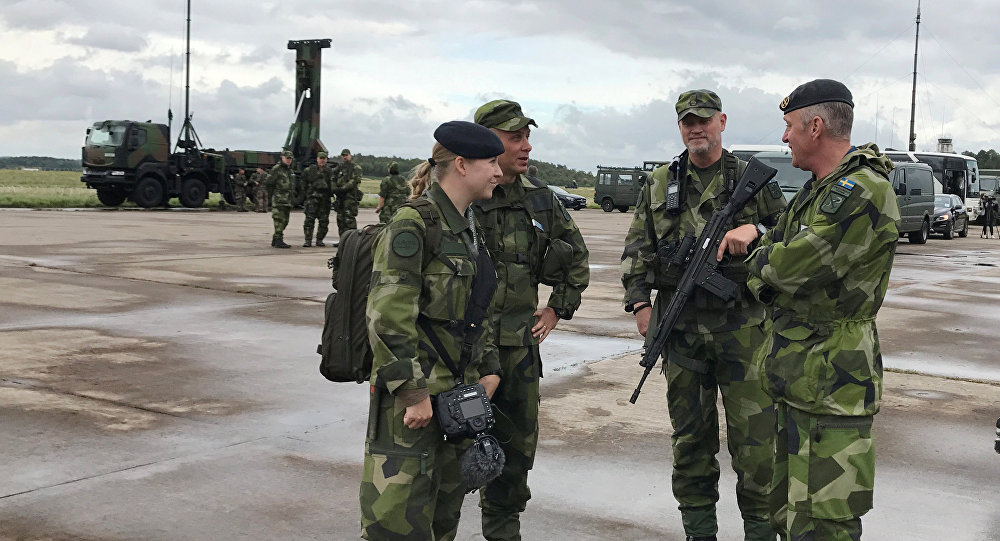 On Monday, Sweden started the largest military drill in over 20 years.

The three-week Aurora 17 drill will take place around the Baltic Sea island of Gotland and the areas surrounding Stockholm and Goteborg and will involve 20,000 troops, including a contingent of over 1,000 US soldiers.

The troops will drill on air, land and sea further contributing to the growing NATO-led military acitvity in Europe.

The mainstream media describes the Aurora 17 drill as a response to the Zapad 2017 joint military exercise conducted by Russia and Belarus that started on Thursday.

Didn’t they have less than 15,000 soldiers, most of which are officers and reservists? All the european armies are little more than corrupt, ineffective budged drains. NATO adds nothing significant to the US army (other than territorial access).

The only armies that seem effective in NATO are the former British colonies and they are too few in numbers.

From what I’ve read, 15,000 are active and another 15,000 are in reserve. Sweden is also in the process of expanding both their active force and their military reserve to 30,000 each to reach a total of 60,000 when fully mobilized. In all honesty this can easily be fulfilled through conscription, perhaps military conscription on the level they had during the Cold War would risk the chance of dealing with an armed revolt against the ruling establishments. Second and Third world dictators are notorious for stunting the efficiency and potential of their armies in order to mitigate the risk of their general staff conspiring against them.

From what I’ve read, 15,000 are active and another 15,000 are in reserve. Sweden is also in the process of expanding both their active force and their military reserve to 30,000 each to reach a total of 60,000 when fully mobilized.

In all honesty NATO and their EU partners could easily solve most of their many military inadequacies if through conscription and massive crackdowns on corruption, though I suspect that military conscription on the level they had during the Cold War could risk the chance of dealing with an armed revolt against these ruling establishments.

Third world dictators are notorious for stifling the intellectual potential of their people and their armies in order to mitigate the risk of rebels conspiring against them. Developed countries in Europe now do the same, as they’ve fallen down to the level of your typical banana republic.

Total and utter hype by the US and NATO backed by their compliant propaganda MSM. Putin’s way to smart to attack Europe. He knows that Europe is doing a superb job of destroying themselves. All Russia has to do is wait. Then the great re – alignment in Europe will take its natural course.

Russia – the hope of the world. Edgar Cayce – famous US psychic. It will be for European refugees as Europe becomes a new Balkan bloodbath.

Starnge as this may seem – it has become the truth! The US is decending into a new dark age as the another major dictatorship after Russia (1917), Germany (1933), China (1948), and now the US (2018 2020). Most smart American’s have already got out of the country with their assets. The US dictatorship is likely to the be the worst ever witnessed in human history.

Well put. I agree entirely. Nazi Germany, Bolshevik Russia on steroids. Fascism – the merging of the political and corporate isn’t even hiding its power now. The militarisation of the police – the complete thumbing of nose at international law and even civilised norms.

The mass murder – increasingly even in the US. God help the decent old Americans because hell in coming – and not in a handcart but threatening Nuclear armageddon.

Sadly, …..very sadly! …… I have to agree with you entirely! The amazing and saddest thig of all is most young American’s can’t see it and are living in their virtual world of false delusions. When it all happens the shock will completely overwhelm them as they didn’t see it coming till it hit them!

ZH today. Says it all. We are very very very right. http://www.zerohedge.com/news/2017-09-15/neoconservatives-have-declared-war-realists

Thanks for posting – very good article!

ZH has some good stuff. Currently running an interesting article on ‘de-dollarisation’, Lots of current affairs – not just finance. And along our thinking.

Sweden is being destroyed from within while they spend billions to defend against imaginary external enemies. The ‘little people ‘Swedes are not oblivious to this – they can see this is happening. They are just powerless to change anything in a usurped government with a different agenda. Kind of like here in the US.

The number of “Swedish” jihadists has gone from around 200 a few years ago to more than 2000 today. The Swedish army still (barely) holds the fire power advantage. When will we see the first quasi military engagement between jiahadists and Swedish police? Though, the jihadists mostly prefer to have Sweden as a R&R rear zone.

We have 23,000 in Britain they say they know of. And probably a million they don’t. In fact in numbers we are far more infested than Sweden. Most Brits here are in la la land – fingers in ears. We have reached a point of no return as the government allows them to pour in, pays them to breed and breed they are – top boys name for years has now been Mohammad. We are the Serbs in the making. Russia has apparently and probably rightly – written us off. London, Birmingham and about 10 other major cities -majority foreign – largely ethnic and islamic. London has an islamic Mayor with very dodgy links.

Written you off what?

That there are so many islamics here – millions, breeding so fast. We have a government and politicians who are in denial about the dangers and intent of islam. A Prime Minister that twitters on about islam is the religion of peace at every terrorist attack – we are now irretrievably being conquered and voting for it. London, Birmingham and at least ten other ciities we are in the minority. Figures in Birmingham. Over 40% of all children islamic.31% white British – the rest of ethnic/foreign background. Swathes of our country is now islamic. We are at the tipping point – they have even cancelled the census after two hundred years to hide the truth… Thats where we have gone and the British have largely voted for the lot. I haven’t. I vote UKIP.

Well, that’s informative and interesting, but I asked in which manner Russia would disregard you now because of all this? I.e. written off some category, or competition in general, etc.

They are not powerless. They have an alternative anti immigration party. But the Swedes are brainwashed political bigots. Apparently too stupid to equate the ballot box with the islamic crime and terror sweeping the country. Until people realise the buck stops with them and vote to change things – they will go on being raped, murdered and terrorised.

Meanwhile their inner cities are already a war-zone….

This is the army that last year couldn’t tell the difference between a tug boat and a nuclear submarine. Nobody cares Sweden, you will lose before the first shot is fired.