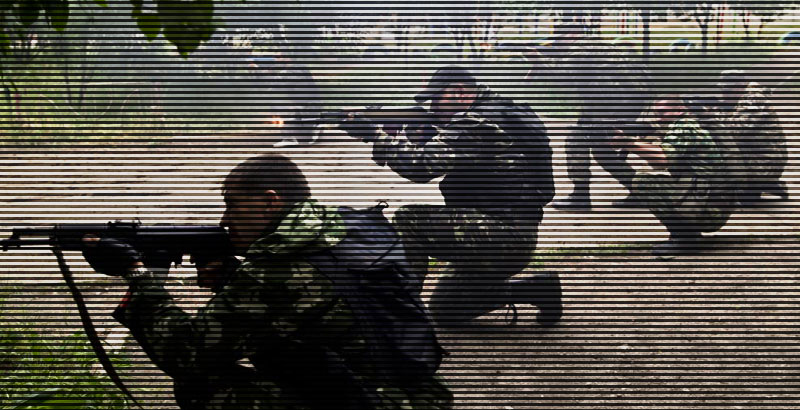 The Command of the Donetsk People’s Republic (DPR) has announced aggravation of the situation at the front, the Ukrainian Armed Forces have built a dug-out 50 meters from positions of the People’s Militia of the Luhansk People’s Republic (LPR). Officers of the LPR Ministry of State Security have discovered and seized more than 35,000 pieces of weapons and ammunition from an arms cache in Luhansk. The Ukrainian side reported about 25 shooting attacks on Ukrainian position by rebels and the death of one Ukrainian soldier.

The Ukrainian Armed Forces’ dug-out near the village of Luhanskaya

The Ukrainian Armed Forces have built a dug-out, equipped with a machine-gun nest, in the area of the bridge over the Severskiy Donets River near the village of Luhanskaya, 50 meters from positions of soldiers of the LPR People’s Militia.

“A dug-out and a machine-gun nest were built in a forest at 50 meters from us. The dug-out was built within two-three days. Using the ‘regime of silence’ and the complete ceasefire from the side of the People’s Militia, soldiers of the Ukrainian Armed Forces came on the close proximity to our positions,” head of the People’s Militia’s checkpoint, located in this area, Nikolai Kuzmin, said.

Kuzmin also added that the Ukrainian side continues to send weapons and military equipment in the village of Luhanskaya, although according to the recent Minsk agreements, a reverse process should take place. The representative of the LPR People’s Militia noted that at the moment, “the ZU-23 anti-aircraft autocannon of the Ukrainian Forces and six boxes with ammunition for it are placed” at a railway-crossing in the booth of a trackman.

Deputy Commander of the DPR Operational Command, Eduard Basurin, noted aggravation of the situation on the contact line. For the past day, Ukrainian military fired at the frontline of the republic 204 times.

“The situation worsened in the Donetsk People’s Republic. Over the past day, the Ukrainian security forces fired on the territory of the republic 204 times, using tanks, mortars, infantry combat vehicles, grenade guns, and light weapons,” Basurin said.

According to the Operational Command, thirty two 82 mm and 120 mm shells and two shots from a tank were fired at Yasinovataya and its surrounding villages: Spartak and Krutaya Balka. The village of Signalnoye, Aleksandrovka village and Petrovskiy district of Donetsk were also fired with 12 shells from 82 mm and 120 mm mortars. Six 120 mm shells were fired at Sahanka village in the south of the republic. In addition, villages near Gorlovka: Zaytsevo, Shirokaya Balka, Krasnyy Partizan and Dokuchaevsk were also fired with weapons of infantry combat vehicles, mortars, and light weapons.

An arms cache in Luhansk

Officers of the LPR Ministry of State Security discovered a large arms cache in Luhansk and seized more than 35,000 pieces of weapons and ammunition from it. According to the LPR Ministry of State Security, the arms cache was set in a household building of an inactive warehouse. Four grenade launchers, five boxes with linked cartridges for the Kalashnikov machine gun, about 10,000 rounds of various calibers, two anti-tank mines, 26 bombshells of various range, three signal cartridges, four smoke pellets, five improvised explosive devices, and more than 25,000 bombs for grenade launchers were discovered in the arms cache.

“A large cache of weapons, ammunition and explosives was discovered by officers of the Ministry of State Security in Luhansk in the framework of operational-search activity,” the press service of the department reported.

The LPR Ministry of State Security continues to take measures to prevent terrorist acts and combat illicit arms trafficking on the territory of the republic.

At the same time, the Ukrainian side claims that rebels opened fire near the villages of Marinka, Talakovka, Starognatovka, Shirokino and Vodyanoy, using machine guns, grenade guns and light weapons.

According to the headquarters of Ukrainian military, over the past day, DPR rebels opened fire on positions of the Ukrainian Army 25 times, while 9 attacks by rebels were spotted at the Luhansk direction.

At the same time, 8 ceasefire violations were noted in the direction of Mariupol. According to Ukrainian military, rebels fired from light weapons, machine guns and grenade guns in the areas of Marinka, Talakovka, Starognatovka, Shirokino and Vodyanoy. In addition, a sniper worked in Shirokino and Marinka.

One Ukrainian soldier was killed, while two others were wounded in the combat zone in Donbass, spokesman for the Ukrainian Defense Ministry, Colonel Alexander Motuzyanik, said.