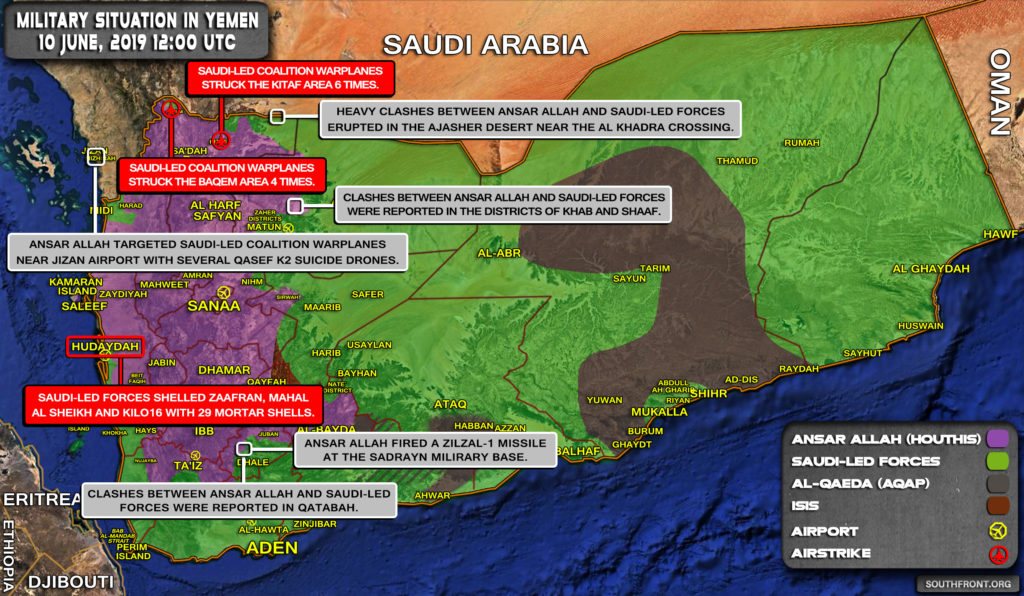 This war is absolutely disgusting. Saudis waisting their manpower on nonsense war. They are just fighting for CIA, I mean, KSA and MBS both acting like CIA agents. At the end of the day they would repent when they lose SA and Yemen to America and Israel.

BEIRUT, LEBANON (12:00 P.M.) – The Saudi Coalition launched another offensive along the Yemeni border, targeting the Ansarallah defenses inside the Al-Ajasher Desert of the Najran Province. The Houthi forces with their Yemeni military allies reported that they were able to repel the Saudi Coalition’s attack after a short battle this morning.

According to the official media wing of the Houthi forces, their troops managed to destroy at least three armored vehicles during the battle, while also killing more than 10 coalition fighters.

I don’t like these lose of innocent people both side. Here in America people lough and enjoy their lives and their they killing each other on Abdur Rabu Mansor Hadi not for God I mean Allah.

The real issue is that the Saudi Wahhabi scum want to control Yemen and turn it into a Zionist vassal state. The majority of Yemeni people wanted their own government, not the puppet Hadi regime. In any case, the Saudis are finished as the Ansarallah are far better armed and organized than they ever were in Yemen’s history. Demographics and geography is also in their favor.

I think this article out today is very telling. Unlike the bombastic Coalition, Ansarullah are more circumspect and rarely exaggerate so this is significant.

Yemen-Press Against the backdrop of the Yemeni Defense Minister’s visit to the front of Najran, many websites have wrote about it, here is a report published by Press-TV :

Yemeni Defense Minister Major-General Mohammad Nasser al-Atifi visited his country’s armed forces in Southern Saudi Arabia’s Najran region for the first time, a move believed by experts to be a humiliation of Riyadh.

While visiting the Saudi forces, Major-General al-Atifi congratulated the Yemeni Army and popular forces on their high morale to face the Saudi aggressors. The Yemeni defense minister underlined that the Yemeni Army and popular forces are very close to the city of Najran in Southern Saudi Arabia, and said that more victories are imminent. https://www.yemenpress.org/yemen/yemeni-defense-minister-enters-saudi-soil-for-first-time-hails-high-morale-of-yemens-armed-forces-near-najran/

The Saudi scum have just lost their second counter attack in Jizan with 3 tanks destroyed and 10 dead.

I commented on this before but it is worth repeated since the map does not convey the important developments in Najran. Check out http://www.yemenpress.org, June 9, 2019 article Ansarullah has closed in to within a few kilometres of the Saudi City of Najran and videos show Ansarullah fighters in position overlooking the city of several hundred thousand. The chief of Ansarullah’s armed forces has personally inspected the front lines with a view of the city only two to three kilometres away – suggests something major is planned and not hard to guess what that is.

I predicted in August last year Ansarullah would take the war into KSA and the first major city to fall would be Najran. I never doubted this eventuality unless alternatively end the war by seizing Aden first. However, something I did not expect is it seems both Aden and Najran are in Ansarullah gunsights although Najran’s fall may be more imminent. Truly impressive.

If the Saudi forces do not push back Ansarullah from recent gains, Najran will be at ever present risk and a humiliating development for the Coalition. So far Coalition attempts have failed and not even close. I would not be surprised if local tribes are giving intel to Ansarallah given their hatred of House of Saud – the area around Najran was formerly part of Yemen. This is why I predicted the city of Najran would be the first major city to fall.

This is looking like the end game now and Ansarallah is even saying as much as they see victory in the coming months that will end the war.

If Najran falls and KSA fails to retake the city quickly, the war is effectively over. MBS has surprised me as quite the survivor but MBS cannot survive the fall of a major City in KSA into the hands of Ansarullah.

R u kidding me? U r saying Houthi’s are taking over Najran City, you r one crazy biased to refer to a website controlled by Houthi’s to make a point.

It has been reported on several media outlets. Also, I have found Houthi media to be generally low key and usually accurate while gulf news are cheerleaders for the Coalition and read the bombastic bs the Coalition provides them. I provided many examples in comments I posted a year ago when the Coalition force attacking Hodeidah failed and disintegrated due to desertion after being cut off- which is why the Coalition announced a general amnesty in Yemen for desertion.

Lastly, look at the videos showing the lights of Najran in the background of the Yemen Commander as he speaks. They surrounded Najran to secure the surrounding territory. Najran was formerly part of Yemen and no need to take over, Najran will switch sides to Yemen without a fight. Just waiting for the announcement …