During the past 24 hours, Syrian government forces made a series of advances against Hayat Tahrir al-Sham and other radical groups in western Aleppo. Government troops are working to expand a buffer zone west of Aleppo city in order to prevent militant attacks on it. The mid-term goal is to secure the entire countryside of Aleppo.

Trap those jihadi rats in the Anadan pocket and exterminate them. Less vermin means less chance of disease spreading.

The days of Jihadis wanting to let themselves pocketed are over. As soon as it looks like they will get surrounded they break and run. I guess they no longer build them like they used to do. Apparently dying for Allah and getting their virgins no longer holds its attractions.

Too many dead Jihadi’s, not enough virgins to go around for everyone it would seem.

They can go back home to yurope or banuistan.. UK has many openings for former humanitarian terrorists due to lack of stock for pedophiles..

You think this bigoted Sunni scum are falling off it’s belief? Rather it becomes obvious that all these religious stories about virgins for the martyred etc. is the opium for the bearded cannon fodder to keep them motivated… The dumbness of the followers of this stone age interpretation of a “religion” seems to be the solid fundament for bloodbaths for eternity…

‘All that glitters is not gold’ and even the jihadists are realising that taking their cash to the EU is the wisest way out of Idlib.

It beats dying in an Idlib field anyway.

VERY DANGEROUS WORK CLEARING “LANDMINES”
It looks as though they are removing and collecting these “landmines” by hand, without the safety of a machine.

Russia says that Turkey continues delivering weapons to terrorists in Idlib. These are probably those same weapons that Turkey confiscated on Nov. 22, 2019;
…Turkey said that they collected 33,000 truckloads of United States weapons that were given to YPG in Syria (weapons found and seized by Turkey included cruise missiles, anti-tank guided missiles (ATGMs) and shoulder-launched surface-to-air missiles (MANPADS), etc). These weapons were discovered in northeast Syria during Turkey’s “Operation Peace Spring”.

CAN YOU IMAGINE THE U.S. TAXPAYER MONEY WASTE !!!

SDF is moving south so should trap some vermin for the cooker.. ratatatoulie….

Go SAA. Do the same as what the Chinese are doing with corona-virus – quarantine it, stop its growth, shrink it and then and eradicate it.

All diseases need to be dealt with the same way :-D

The latest field report from this front: The Syrian Arab Army has begun pushing north to close off the last jihadist pocket in the Anadan Plain region, which has been under the latter’s control since 2013.
The report said the Syrian Arab Army has already captured several areas in western Aleppo this morning, including the small town of Bashqatin.
It would add that the Syrian Army is now attacking the strategic town of Kafr Da’el, which is an important step in closing off the jihadist pocket in the Anadan Plain.
The likelihood of the jihadists being envelopment is very slim, as they will most likely retreat from the area before they are completely encircled. AMN News

krafh da el under control the SAA for 1 hour :)

Tactical superiority on the side of SAA, as seen before too. Expecting them to encircle terrorist remains soon after spliting their territory.

Meanwhile, the IDF F-35’s continue to strike Syria with NO PROBLEM and routinely fly in Syrian airspace undetected

You are free to belive in that.

His dreams will come to a crushing end one day, like when S-300 are deployed in Damascus under Syrian control :)

joker they fly over jordan .en than shoot the missel ,or they hidding behind civil airplains yo joker .the idaf are total losers .
. 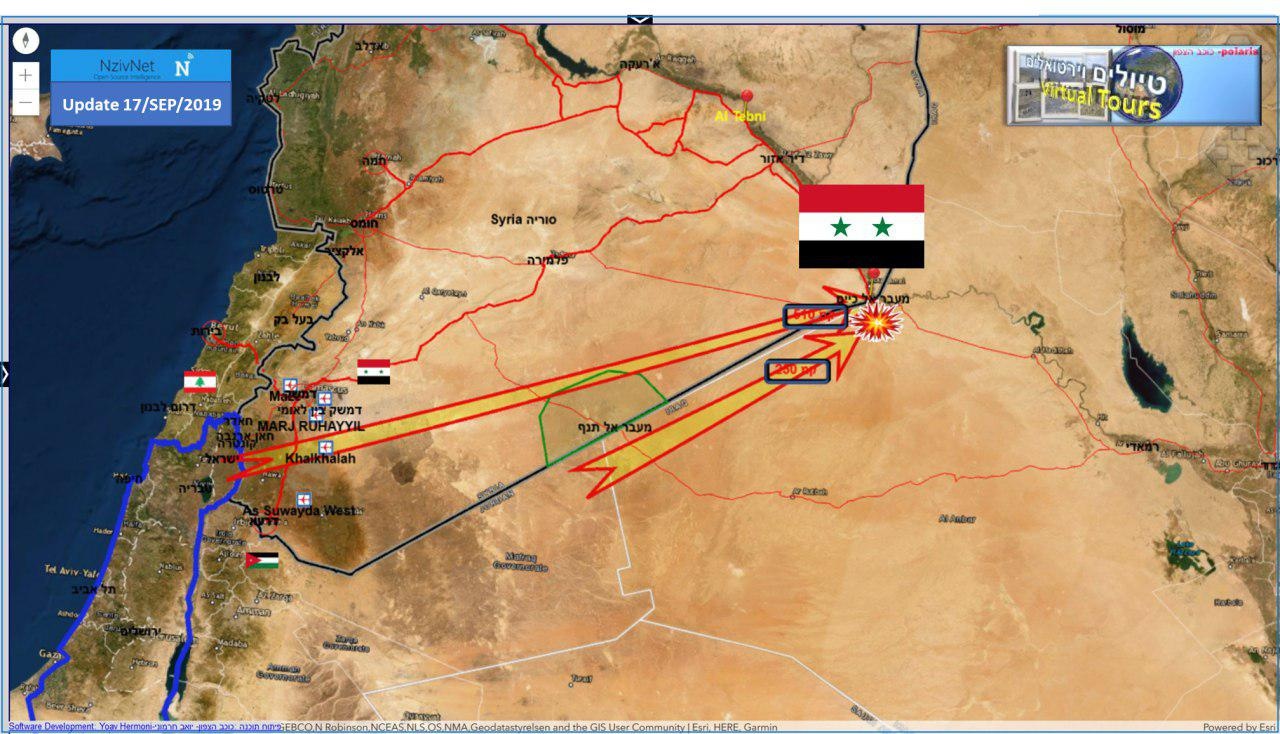 Who are you working for?

“confirmed by” aviationgeekclub? You realize this site is ran by a fat jewish kid who runs the retarded youtube channel “defense updates”?

It was confirmed by an Israeli news site originally with Israeli military contacts. So screw off, antisemite

The real semites are the arabs

The rusty russkies claimed their S-400 can detect F-35’s ALL OVER syria within 400 miles. That claim has been debunked by our mighty IDF Stealth Eagles

No one EVER claimed that, Shitstein. S-400 designers claimed the anti-stealth range to be 150km, and according to these flight paths you posted, the f-35 are 200km away from Hmeimmim Airbase and Maysaf, where Russian/Syrian S-300/400 are stationed. But more importantly this never happened.

we get it Simon, those rusty russkie S-400 junk systems cannot shoot down let alone detect our stealth F-35’s :D

Haha jacob talking from his 3rd to his 2nd account again.

This has been debunked already Shitstein, no Israeli F-35’s entered Western Syrian airspace over Damascus. They use Jordanian/Iraqi airspace. But these dreams are hilarious. What’s even funnier is how many retarded neocon/zio fanboys believe it’s true.

wong flight path there juicy.. they fly via jordan then iraq and then via US occupied Syria.. Last time they flew near T4 a pigeon went up that pilots ass..

false! F-35 has a radar cross section of 0.0001 m^2, meaning soviet era Syrian radars over Damascus would not be able to see it past 5km, meaning the entire Damascus airspace is free open range for our mighty IDF Eagles

First off, these F-35 flight paths are 200+ kilometers away from any Russian or Syrian S-300 battery. S-400 has a declared anti-stealth detection range of 150km while the S-300 has 60km, so this is why they weren’t detected.

Second, this bogus 0.0001 cross section claim is under LAB conditions ONLY, maximum achievable, and for the frontal/nose cone section of the aircraft. In a real combat environment, the maximum achievable RCS is around 0.01-0.1 meters^2, which is why the SU-57 stealth engineers designed it this way.

Third, Syrian S-200/BUK/SA-3 radars have an anti-stealth range of 10-20 kilometers, meaning your F-35 are directly in range and according to this flight chart flew over an SA-2 battery south of Damascus. So unless the F-35 was flying 100 feet off the ground, it would’ve been shot down. Under any circumstance this would’ve never happened and was already debunked. Nothing but zionist fairy tales.

The bomb, uh…. Jews stil think, like the even dumber Yankikes, on the holy grail, the biggus dickus, the bomb religion, the bigger the better, and have learned nothing, but hey, I dont bother to waist time on nonsense but let the Jews brag, they dont have much else, than the bragging.
Like castrats whom braggs about what They had.

Facts, well, dont think that facts helps debating HasbaRats and Yankikes, when wars after war, except the “briliant” attack on Granada, an island so smal its difficould to find it on an world map, apart from that, how is it going elsewhere, Yankikes.

From Korea, where you bombed and killed 1/3 of the population, pulverised citys upon citys, and burn much of the land, and yet you lost.
Vietnam, ask your heroes fighting, you dropped more bombs on the Ho Chi ming road in Cambodia alone that in the entire WW2 theater, and dumped more chemical poison on the Vietnames than anywhere else in the history of man, and yet, you lost.
WW2, witch of course you brag about, the landing in Normandie, where the fact was, that the German force you encountered was consisting of Young men, and old veterans, where as 80% of the German army was fighting on the eastern Front and you barely made it, thats an fact.
And then we Afganistan, and you may brag about Iraq etc, but the truth is, Iraq didnt stand an chanse, nothing to counter and the land forces was more or less, non extsiting, and so on, with an coalition of others, and the only desent thing Saddam could do, to save the people was to surender, but the problem was the Yankikes, an sick pereverted pack of scums, and thats what the Iraqis and Iranians know everything about.

ISISrael, well, you have bombed, for decades, but everytime you go ground attack you loose, Lebanon, to Gaza ( 3 days, and the Johos fled, yeah, and went back to indiscrimiating bombing Gaza, like eh…. real tough warriors hiding behind the wall), the others back to the 70s was someting ellse witch I dont bother to debate right now, but every ground war, Jew, you have lost, pissed into your pants and fled with your pathetic tale between your leggs, but hey, do continue, little rat, the truth about you and your kind is dripping into the world, every day, and I know when the bigg one comes, after Trumsptein the Dickless will attack Iran, after the election, since He is nothing but an Joho bitch, that war, Jews, will be your last one, in an sense, to be frank I hope that you are indeed that dumb, despite the graveness and the violence, your faight in the Bomb will be the one that will drag your shithole down the drain.

But again, the Syrian war is coming to an end, and we all know it, and despite the hurra shouting of the HarsbaRats and the sniveling drivel we encounter every day, this war is soon ended, and I hope that the RuFs forces takes out the sledgehammer and starts to pund.
But hey, Jew, since we are after all, sivilized, have an nice day.

I am always pleased when Khazars are at peace :)
The more the merrier.