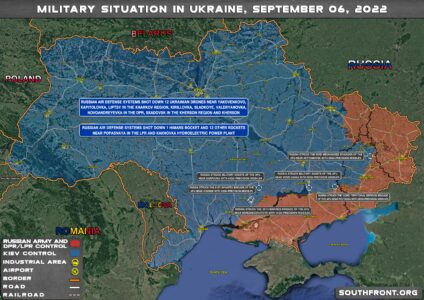 I see that Russian lost a small piece of Lughansk acording the map. They retread from East also ??

The absurd Main Stream Media and the delusional UAF keep saying Zelenskyy’s counter offensive is making great progress but details are sketchy because they’re maintaining radio silence. Yeah right. The fact that they advertise taking a couple of villages and destroying a few Russian tanks and no mention of the failed Zaporizhzhia raid says otherwise.

Why is than SF making silence about that ? No more wining article about Russians. I belive that sucses for RF will be keeping this area where are they now.

The war is heating up. Keep grinding Russia!

Where are they grinding that isn’t going backwards? The Ukrainians are stripping their defenses in the east and Russia still can’t move forward there.

missy missy from idaho—why husband divorce you? can find new tranny mulatto in nebraska? or do you prefer the double taliban in your anus? 😂😂😂😂

Where are Yuri Gayer Clyde Irene War Pumpers Academy Ashit Varka and all those clowns now? 🤣🤣 Common crawl back from your safe spaces i need those tears 😘

Well, get the fuck out of here to your Israel! And shut your stinky mouth, you stinky liquid!

Russia struck the 35th Marines Brigade of the AFU near Bereznegovatoye with high-precision missiles;

Russia struck the 61st Infantry Brigade of the AFU near Visunsk with high-precision missiles;

Russia struck the 93rd Mechanised Brigades of the AFU near Artyomovsk with high-precision missiles;

Russia struck the 102nd Territorial Defence Brigade of the AFU near Poltavka with high-precision missiles;

Russia struck military assets of the AFU near Karpovka with high-precision missiles;

Russia struck military assets of the AFU near Veselyanka with high-precision missiles;

Russian air defense systems shot down 1 HIMARS rocket and 12 other rockets near Popasnaya in the LPR and Kakhovka hydroelectric power plant.

Did you read? Nothing to cry about unless you are a gay nazi ukrop.

The situation in the Kharkiv and Kherson directions for the evening of 09/06/2022 Fierce battles are going on for Soledar. News. First channel

According to the sources of Ordinary Tsarism, the scale of the offensive is assumed to be no less than that of Kherson.

“Fights are going on in the area of ​​Verbovka, in the suburbs of Balakliya,” the tsarist source said.

At the same time, an attack is planned in the Izyum direction, to divert the main forces. From the available data: on Izyumsky they will hit with what they have, and a lot of fresh forces and equipment will be brought up to Balakleya.

Currently, reserves are being brought up from Zmiev and Kharkov. The upcoming battle will be for the initiative, and the Ukrainian command traditionally does not plan to reckon with losses.

The task of the Russian army is to make the losses of the Armed Forces of Ukraine truly monstrous. Kharkov land is thirsty for the blood of Ukrainian invaders.

▪️After several days of artillery preparation, the Armed Forces of Ukraine launched an attack on Balakleya, which had been occupied back in March. The Ukrainian command has been preparing an offensive for a month and daily transferring equipment and personnel to the city: the last large column passed through Andreevka, located to the north-west, just yesterday.

▪️Ukrainian units advanced from the village of Prishib in the direction of Verbovka to the north of the city. Local resources reported that bridges across the Balakleyka and Extreme Balakleyka rivers were blown up in order to prevent further advancement of the Armed Forces of Ukraine, while some of the overpasses were allegedly put out of action in advance in the previous few days.

▪️Despite the bravura statements of Ukrainian resources, units of the Armed Forces of Ukraine did not enter Balakleya. All battles are currently taking place in the area of ​​the village of Verbovka and the 65th arsenal located there. Reinforcements of the RF Armed Forces were sent to the city and its environs.

▪️The Russian Aerospace Forces attacked the headquarters of the Armed Forces of Ukraine in Chuguev, from where the leadership of the attack on Balakleya was going. In order to camouflage, the Ukrainian command set up a false command post in the city, but the RF Armed Forces did not fall for the trick and hit the target.

▪️At the same time, unconfirmed information appeared about the advance of Russian troops in the north of the Kharkiv region in the direction of the village of Shestakovo and the capture of the settlements of Bayrak and Peremoga.

The Kharkiv direction became more active much earlier than today. Preparations for the offensive were carried out for at least a month. Now we see what we wrote about earlier – a counteroffensive has begun.

In addition to what many channels have already circulated about Balakliya, I would like to say about the intensification of missile strikes. Over the past week, dozens of missiles have received: Izyum, Kupyansk, Shevchenkovo ​​and other places. Only yesterday over 30 Hymers rockets flew over Izyum, I will not write about the results.

I also want to turn to various channels – do not rush to give unverified information about Shestakovo, Peremoga, Bayrak, for now you are drawing too optimistic pictures.

We wish good luck and strength to our warriors. Victory is forged by the enterprising and resolute, there is hope for them.

❗️Ukrainian Armed Forces launch an offensive in the Izyum direction

According to “Come and See”, the Ukrainian army has stepped up hostilities along the entire front line in the Kharkiv region.

💬“The offensive will go from both sides of the Izyum highway (M-03), as well as to the south of the liberated Svyatogorsk,” the source of the channel said.

According to him, artillery has already been brought there to begin artillery preparation.

Earlier, the Ukrainian army launched an attack on Balakleya. Fights are going on in the vicinity of the city.

🇬🇧🇺🇦 The battle for Kherson: the situation in the Andreevsky sector as of 18.00 on September 6 of the year

The Andreevsky sector of the front in the Nikolaev-Kryvyi Rih direction remains a zone of active fighting.

In the first half of the day, the Russian Aerospace Forces put out of action all three crossings that were functioning today. Artillery fire prevented the pontoon-bridge park of the Armed Forces of Ukraine from building a new crossing.

▪️To the south-east of Bereznegovatoy in a forest plantation from the Smerch MLRS, the reserves of the Armed Forces of Ukraine, which were planned to be transferred to the south, were destroyed. In the village of Krasnopolye, two Ukrainian self-propelled guns were put out of action. By evening, the Armed Forces of Ukraine transferred two 152 mm Giacint-B guns and one American 155 mm M777 howitzer to Bereznegovatoe.

▪️Infantry of the Armed Forces of Ukraine, having crossed Ingulets at night, dispersed along the Plotnitsky tract and began advancing towards Belogorka from the north-west. Around 13.00 Moscow time, the offensive was thwarted: Russian bombers destroyed the enemy grouping on the northwestern outskirts of the village.

▪️In the area of ​​​​Sukhoi Stavka and Andreevka, the RF Armed Forces continue to destroy scattered enemy groups with artillery fire and bombing strikes of the Russian Aerospace Forces.

▪️On the northern bank of the Ingulets, there are still reserves in manpower and equipment. There are no more new tanks: basically, they throw the BMP-1 and lightly armored vehicles of Western production

And yet, the Russians cannot gain a foot, and they apparently have no ability to counterattack and take advantage of the weak points in the Ukranian front. The Ukranian military should have crumbled somewhere by now!

The Russian alliance has effectively created Ukie killing fields that the Ukies rush toward.

Russia appears to have no offensive ability any longer, however, the # of HIMARS missiles being fired has dropped drastically so hopefully their intel is tracking the emergency shipment the US is undoubtedly stripping from its defenses to send. BLOW THEM UP before they get to the launchers this time.